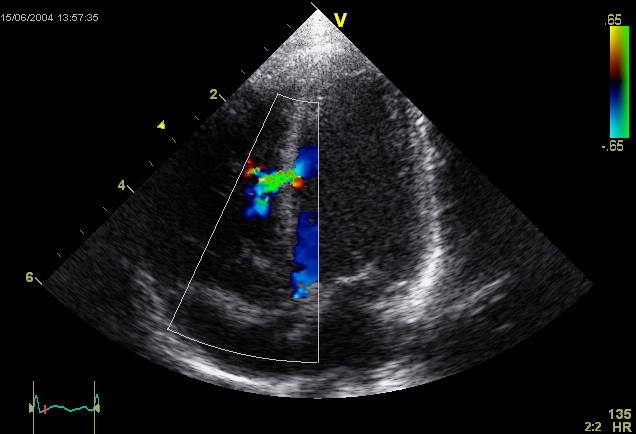 Caption = Echocardiographic image of a moderate "ventricular septal defect" in the mid-muscular part of the septum. The trace in the lower left shows the flow during one complete and the red mark the time in the cardiac cycle that the image was captured. Colours are used to represent the velocity of the blood. Flow is from the (right on image) to the (left on image). The size and position is typical for a VSD in the newborn period.
Width = 300
DiseasesDB = 13808
ICD10 = ICD10|Q|21|0|q|20
ICD9 = ICD9|745.4
ICDO =
OMIM =
MedlinePlus =
eMedicineSubj = med
eMedicineTopic = 3517
MeshName = Ventricular+Septal+Defects
MeshNumber = C14.240.400.560.540
A ventricular septal defect (VSD) is a defect in the , the wall dividing the left and right ventricles of the .

A VSD can be detected by cardiac auscultation. Classically, a VSD causes a pathognomonic holo- or pansystolic murmur. Auscultation is generally considered sufficient for detecting a significant VSD. The murmur depends on the abnormal flow of blood from the left ventricle, through the VSD, to the right ventricle. If there is not much difference in pressure between the left and right ventricles, then the flow of blood through the VSD will not be very great and the VSD may be silent. This situation occurs a) in the fetus (when the right and left ventricular pressures are essentially equal), b) for a short time after birth (before the right ventricular pressure has decreased), and c) as a late complication of unrepaired VSD. Confirmation of can be obtained by non-invasive cardiac ultrasound (). To more accurately measure ventricular pressures, , can be performed.

Ventricular septal defect is usually symptomless at birth. It usually manifests a few weeks after birth.

Non specific symptoms such as the baby not feeding well.

*Pansystolic / Holosystolic murmur (depending upon the size of the defect)

Treatment is either conservative or surgical. Smaller congenital VSDs often close on their own, as the heart grows, and in such cases may be treated conservatively. In cases necessitating surgical intervention, a is required and a is performed. Percutaneous endovascular procedures are less invasive and can be done on a beating heart, but are only suitable for certain patients. Repair of most VSDs is complicated by the fact that the conducting system of the heart is in the immediate vicinity.

VSDs are the most common congenital cardiac anomalies. They are found in 30-60% of all newborns with a congenital heart defect, or about 2-6 per 10000 births. It is debatable whether all those defects are true heart defects, or if some of them are normal phenomena, since most of the trabecular VSDs close spontaneously. [Meberg A, et al: "Increasing incidence of ventricular septal defects caused by improved detection rate". Acta Pædiatrica 1994; 83: 653-657.] Prospective studies give a prevalence of 2-5 per 100 births of trabecular VSDs that closes shortly after birth in 80-90% of the cases. [Hiraishi S, Agata Y, Nowatari M, Oguchi K, et al. Incidence and natural course of trabecular ventricular septal defect: Two-dimensional echocardiography and color Doppler flow image study. J Pediatr 1992;120:409-15.] [Roguin N, Du ZD, Barak M, Nasser N, Hershkowitz S, Milgram E. High prevalence of muscular ventricular septal defect in neonates. J Am Coll Cardiol 1995 November 15;26(6):1545-8] .