The mitral valve (also known as the bicuspid valve or left atrioventricular valve) is a dual-flap (bi- from the Latin, meaning double, and mitral- from the Latin, meaning shaped like a mitre) valve in the heart that lies between the left atrium (LA) and the left ventricle (LV). The mitral valve (not to be confused with the congenital bicuspid aortic valve) and the tricuspid valve are known collectively as the atrioventricular valves because they lie between the atria and the ventricles of the heart and control the flow of blood. 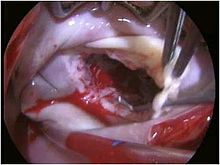 The mitral valve is typically 4–6 cm² in area. It has two cusps, or leaflets, (the anteromedial leaflet and the posterolateral leaflet) that guard the opening. The opening is surrounded by a fibrous ring known as the mitral valve annulus. (The orientation of the two leaflets resemble a bishop's mitre, whence the valve receives its name.[1]) The anterior cusp protects approximately two-thirds of the valve (imagine a crescent moon within the circle, where the crescent represents the posterior cusp). Note that although the anterior leaflet takes up a larger part of the ring and rises higher, the posterior leaflet has a larger surface area. These valve leaflets are prevented from prolapsing into the left atrium by the action of tendons attached to the posterior surface of the valve, chordae tendineae.

The inelastic chordae tendineae are attached at one end to the papillary muscles and the other to the valve cusps. Papillary muscles are fingerlike projections from the wall of the left ventricle. Chordae tendineae from each muscle are attached to both leaflets of the mitral valve. Thus, when the left ventricle contracts, the intraventricular pressure forces the valve to close, while the tendons keep the leaflets coapting together and prevent the valve from opening in the wrong direction (thus preventing blood to flow back to the left atrium). Each chord has a different thickness. The thinnest ones are attached to the free leaflet margin, whereas thickest ones (strut chords) are attached quite away from the free margin. This disposition has important effects on systolic stress distribution physiology [2](video).

After the E wave, there is a period of slow filling of the ventricle.

The mitral annulus changes in shape and size during the cardiac cycle. It is smaller at the end of atrial systole due to the contraction of the left atrium around it, like a sphincter. This reduction in annulus size at the end of atrial systole may be important for the proper coapting of the leaflets of the mitral valve when the left ventricle contracts and pumps blood.[3] Leaking valves can be corrected by mitral valve annuloplasty, a common surgical procedure that aims at restoring proper leaflet coaptation.

The closing of the mitral valve and the tricuspid valve constitutes the first heart sound (S1). It is not actually the valve closure which produces a sound but rather the sudden cessation of blood flow caused by the closure of the mitral and tricuspid valves. The mitral valve opening is normally not heard except in Mitral Stenosis (narrowing of the valve) as the Opening Snap. Flow of blood into the heart during rapid filling is not normally heard except in certain pathological states where it constitutes the third heart sound (S3). 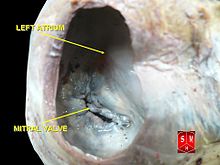