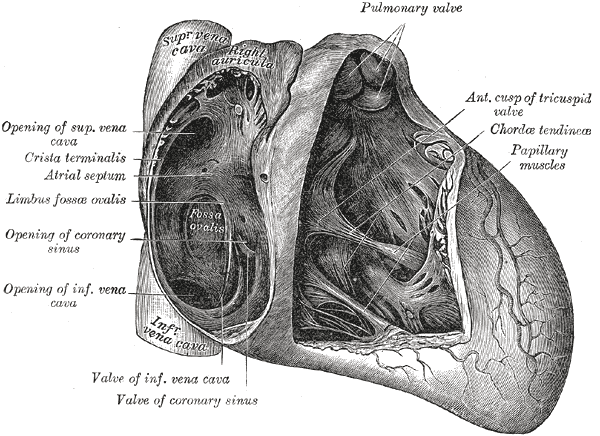 Caption = Interior of right side of . (SA node not labeled, but region visible at left, near . 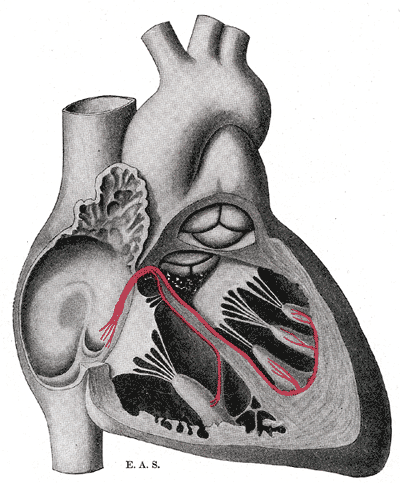 Caption2 = Schematic representation of the atrioventricular bundle of His.
System =
Artery = | MeshName = Sinoatrial+Node
MeshNumber = A07.541.409.819
DorlandsPre = n_09
DorlandsSuf = 12577255
The Sinoatrial node (abbreviated SA node or SAN, also called the sinus node) is the impulse generating (pacemaker) tissue located in the of the , and thus the generator of . It is a group of cells positioned on the wall of the right atrium, near the entrance of the . These cells are modified cardiac . Though they possess some contractile filaments, they do not contract.

Role as a pacemaker

Although all of the heart's cells possess the ability to generate the electrical impulses (or action potentials) that trigger cardiac contraction, the sinoatrial node is what normally initiates it, simply because it generates impulses slightly faster than the other areas with . Because cardiac s, like all , have refractory periods following contraction during which additional contractions cannot be triggered, their pacemaker potential is overridden by the sinoatrial node. In the absence of extrinsic neural and hormonal control, cells in the SA node will naturally discharge (create ) at about 100 times/minute. [ [http://sprojects.mmi.mcgill.ca/cardiophysio/AnatomySAnode.htm AnatomySAnode ] ] Because the sinoatrial node is responsible for the rest of the heart's electrical activity, it is sometimes called the primary pacemaker.

If the SA node does not function, or the impulse generated in the SA node is blocked before it travels down the electrical conduction system, a group of cells further down the heart will become the heart's pacemaker. These cells form the (), which is an area between the atria and ventricles, within the .

In the majority of patients, the SA node receives blood from the , meaning that a occluding it will cause in the SA node unless there is a sufficiently good from the left coronary artery. If not, death of the affected cells will stop the SA node from triggering the heartbeat.