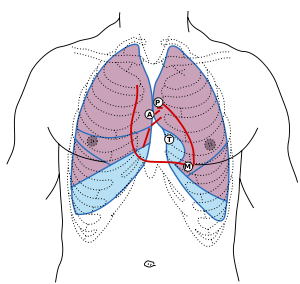 Front of thorax, showing surface relations of bones, lungs (purple), pleura (blue), and heart (red outline). The location of best auscultation for each heart valve are labeled with "M", "T", "A", and "P". 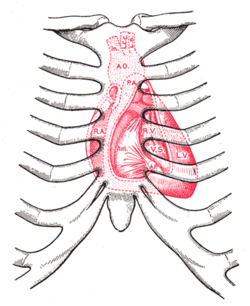 Heart sounds, or heartbeats, are the noises generated by the beating heart and the resultant flow of blood through it (specifically, the turbulence created when the heart valves snap shut). In cardiac auscultation, an examiner may use a stethoscope to listen for these unique and distinct sounds that provide important auditory data regarding the condition of the heart to a trained observer.

In healthy adults, there are two normal heart sounds often described as a lub and a dub (or dup), that occur in sequence with each heart beat. These are the first heart sound (S1) and second heart sound (S2), produced by the closing of the AV valves and semilunar valves respectively. In addition to these normal sounds, a variety of other sounds may be present including heart murmurs, adventitious sounds, and gallop rhythms S3 and S4.

Heart murmurs are generated by turbulent flow of blood, which may occur inside or outside the heart. Murmurs may be physiological (benign) or pathological (abnormal). Abnormal murmurs can be caused by stenosis restricting the opening of a heart valve, resulting in turbulence as blood flows through it. Abnormal murmurs may also occur with valvular insufficiency (or regurgitation), which allows backflow of blood when the incompetent valve closes with only partial effectiveness. Different murmurs are audible in different parts of the cardiac cycle, depending on the cause of the murmur.

The first heart tone, or S1, forms the "lub" of "lub-dub" and is composed of components M1 and T1. Normally M1 precedes T1 slightly. It is caused by the sudden block of reverse blood flow due to closure of the atrioventricular valves, i.e. tricuspid and mitral (bicuspid), at the beginning of ventricular contraction, or systole. When the ventricles begin to contract, so do the papillary muscles in each ventricle. The papillary muscles are attached to the tricuspid and mitral valves via chordae tendineae, which bring the cusps or leaflets of the valve closed (chordae tendineae also prevent the valves from blowing into the atria as ventricular pressure rises due to contraction). The closing of the inlet valves prevents regurgitation of blood from the ventricles back into the atria. The S1 sound results from reverberation within the blood associated with the sudden block of flow reversal by the valves.[1] If T1 occurs slightly after M1, then the patient likely has a dysfunction of conduction of the right side of the heart such as a right bundle branch block.

The second heart tone, or S2, forms the "dub" of "lub-dub" and is composed of components A2 and P2. Normally A2 precedes P2 especially during inspiration when a split of S2 can be heard. It is caused by the sudden block of reversing blood flow due to closure of the semilunar valves (the aortic valve and pulmonary valve) at the end of ventricular systole, i.e. beginning of ventricular diastole. As the left ventricle empties, its pressure falls below the pressure in the aorta. Aortic blood flow quickly reverses back toward the left ventricle, catching the pocket-like cusps of the aortic valve, and is stopped by aortic (outlet) valve closure. Similarly, as the pressure in the right ventricle falls below the pressure in the pulmonary artery, the pulmonary (outlet) valve closes. The S2 sound results from reverberation within the blood associated with the sudden block of flow reversal.

Splitting of S2, also known as physiological split, normally occurs during inspiration because the decrease in intrathoracic pressure increases the time needed for pulmonary pressure to exceed that of the right ventricular pressure. A widely split S2 can be associated with several different cardiovascular conditions, including right bundle branch block and pulmonary stenosis.

The rarer extra heart sounds form gallop rhythms and are heard in both normal and abnormal situations.

Rarely, there may be a third heart sound also called a protodiastolic gallop, ventricular gallop, or informally the "Kentucky" gallop as an onomatopoeic reference to the rhythm and stress of S1 followed by S2 and S3 together (S1=Ken; S2=tuck; S3=y).

It occurs at the beginning of diastole after S2 and is lower in pitch than S1 or S2 as it is not of valvular origin. The third heart sound is benign in youth, some trained athletes, and sometimes in pregnancy but if it re-emerges later in life it may signal cardiac problems like a failing left ventricle as in dilated congestive heart failure (CHF). S3 is thought to be caused by the oscillation of blood back and forth between the walls of the ventricles initiated by inrushing blood from the atria. The reason the third heart sound does not occur until the middle third of diastole is probably that during the early part of diastole, the ventricles are not filled sufficiently to create enough tension for reverberation.

It may also be a result of tensing of the chordae tendineae during rapid filling and expansion of the ventricle. In other words, an S3 heart sound indicates increased volume of blood within the ventricle. An S3 heart sound is best heard with the bell-side of the stethoscope (used for lower frequency sounds). A left-sided S3 is best heard in the left lateral decubitus position and at the apex of the heart, which is normally located in the 5th left intercostal space at the midclavicular line.[2] A right-sided S3 is best heard at the lower-left sternal border. The way to distinguish between a left and right-sided S3 is to observe whether it increases in intensity with inspiration or expiration. A right-sided S3 will increase on inspiration whereas a left-sided S3 will increase on expiration.

The rare fourth heart sound when audible in an adult is called a presystolic gallop or atrial gallop. This gallop is produced by the sound of blood being forced into a stiff/hypertrophic ventricle.

It is a sign of a pathologic state, usually a failing left ventricle, but can also be heard in other conditions such as restrictive cardiomyopathy. The sound occurs just after atrial contraction ("atrial kick") at the end of diastole and immediately before S1, producing a rhythm sometimes referred to as the "Tennessee" gallop where S4 represents the "Ten-" syllable. It is best heard at the cardiac apex with the patient in the left lateral decubitus position and holding his breath. The combined presence of S3 and S4 is a quadruple gallop, also known as the "Hello-Goodbye" gallop. At rapid heart rates, S3 and S4 may merge to produce a summation gallop (sometimes referred to as S7).## 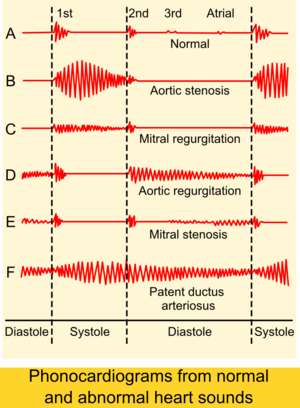 Heart murmurs are produced as a result of turbulent flow of blood, turbulence sufficient to produce audible noise. They are usually heard as a whooshing sound. The term murmur only refers to a sound believed to originate within blood flow through or near the heart; rapid blood velocity is necessary to produce a murmur. Yet most heart problems do not produce any murmur and most valve problems also do not produce an audible murmur.

The following paragraphs overview the murmurs most commonly heard in adults who do not have major congenital heart abnormalities.

As noted, several different cardiac conditions can cause heart murmurs. However, the murmurs produced often change in complex ways with the severity of the cardiac disease. An astute physician can sometimes diagnose cardiac conditions with some accuracy based largely on the murmur, related physical examination and experience with the relative frequency of different heart conditions. However, with the advent of better quality and wider availability of echocardiography and other techniques, heart status can be recognized and quantified much more accurately than formerly possible with only a stethoscope, examination and experience.

With expiration, the opposite haemodynamic changes occur. This means that left-sided murmurs generally increase in intensity with expiration. Having the patient lie supine and raising their legs up to a 45 degree angle facilitates an increase in venous return to the right side of the heart producing effects similar to inhalation-increased blood flow.

There are a number of interventions that can be performed that alter the intensity and characteristics of abnormal heart sounds. These interventions can differentiate the different heart sounds to more effectively obtain a diagnosis of the cardiac anomaly that causes the heart sound.

Clicks: With the advent of newer, non-invasive imaging techniques, the origin of other, so-called adventitial sounds or "clicks" has been appreciated. These are short, high-pitched sounds.

Rubs: Patients with pericarditis, an inflammation of the sac surrounding the heart (pericardium), may have an audible pericardial friction rub. This is a characteristic scratching, creaking, high-pitched sound emanating from the rubbing of both layers of inflamed pericardium. It is the loudest in systole, but can often be heard at the beginning and at the end of diastole. It is very dependent on body position and breathing, and changes from hour to hour.

The aortic area, pulmonic area, tricuspid area and mitral area are areas on the surface of the chest where the heart is auscultated. Heart sounds result from reverberation within the blood associated with the sudden block of flow reversal by the valves closing. Because of this, auscultation to determine function of a valve is usually not performed at the position of the valve, but at the position to where the sound waves reverberate.

Using electronic stethoscopes, it is possible to record heart sounds via direct output to an external recording device, such as a laptop or MP3 recorder. The same connection can be used to listen to the previously-recorded auscultation through the stethoscope headphones, allowing for more detailed study of murmurs and other heart sounds, for general research as well as evaluation of a particular patient's condition.

In the chest sound photo, the red dot doesn't match up with the tricuspid sound normally heart in the 5th intercostal space near the left sternal border.