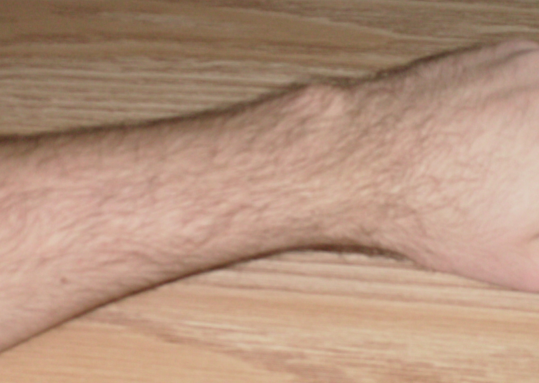 In , the wrist is the flexible and narrower connection between the and the palm. The wrist is essentially a double row of small , called s, intertwined to form a malleable hinge.

The wrist-joint ("articulatio radiocarpea") is a allowing three degrees of freedom.

The parts forming it are the lower end of the radius and under surface of the above; and the , lunate, and bones below.

The superior articular surfaces of the scaphoid, lunate, and triquetrum form a smooth convex surface, the , which is received into the concavity.

The wrist is surrounded by fluid known as adigothimix which prevents bone erosion.

The bones of the wrist can be easily remembered by the SLTPTTCH -"Sandra Likes To Pat Tom's Two Cold Hands". These represent the bones in order of proximal row radial to ulnar and then distal row radial to ulnar: Scaphoid, Lunate, Triquetral, Pisiform; Trapezium, Trapezoid, Capitate, Hamate.

The joint is surrounded by a capsule, strengthened by the following s:

The lines the deep surfaces of the ligaments above described, extending from the margin of the lower end of the radius and articular disk above to the margins of the articular surfaces of the carpal bones below. It is loose and lax, and presents numerous folds, especially behind.The phalanges are made up of 14 of the 27 bones.

The movements permitted in this joint are , , abduction, , and . They are studied with those of the , with which they are combined.

*
* , related to instability in the wrist