Behçet's disease
Not to be confused with Becker disease.

Behçet's disease (pronounced /bɛˈtʃɛt/) (Persian: 'بهجت') (Sometimes called Behçet's syndrome, Morbus Behçet, or Silk Road disease) is a rare immune-mediated systemic vasculitis[1] that often presents with mucous membrane ulceration and ocular involvements.Behçet disease (BD) was named in 1937 after the Turkish dermatologist Hulusi Behçet, who first described the triple-symptom complex of recurrent oral aphthous ulcers, genital ulcers, and uveitis. As a systemic disease, it can also involve visceral organs such as the gastrointestinal tract, pulmonary, musculoskeletal, and neurological systems. This syndrome can be fatal, due to ruptured vascular aneurysms, or severe neurological complications.[2]

Nearly all patients present with some form of painful oral mucocutaneous ulcerations in the form of aphthous ulcers or non-scarring oral lesions.[2] The oral lesions are similar to those found in inflammatory bowel disease and can be relapsing.[2] Painful genital ulcerations usually develop around the anus, vulva or scrotum and cause scarring in 75% of the patients.[2] Additionally, patients may present with erythema nodosum, cutaneous pustular vasculitis, and lesions similar to pyoderma gangrenosum.[2] 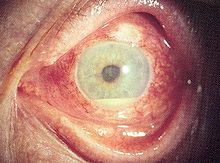 A patient depicting hypopyon which can be seen in anterior uveitis in a patient with Behcet's disease.

Optic nerve involvement in Behçet's disease is rare, typically presenting as progressive optic atrophy and visual loss. However, cases of acute optic neuropathy (specifically anterior ischemic optic neuropathy) have also been reported to occur.[3] Optic nerve atrophy has been identified as the most common cause of visual impairment. Behçet's disease may result in primary or secondary optic nerve involvement. Papilledema as a result of dural sinus thrombosis[4] and atrophy resulting from retinal disease, have been characterized as secondary causes of optic nerve atrophy in Behçet's disease.[5][6] 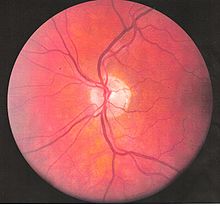 GI manifestations include abdominal pain, nausea, and diarrhea with or without blood, and they often involve the ileocecal valve.[2]

Lung involvement is typically in the form of hemoptysis, pleuritis, cough, or fever, and in severe cases can be life threatening if the outlet pulmonary artery develops an aneurysm which ruptures causing severe vascular collapse and death from bleeding in the lungs.[2]

Arthralgia is seen in up to half of patients, and is usually a non-erosive poly or oligoarthritis primarily of the large joints of the lower extremities.[2]

Neurological involvements range from aseptic meningitis to vascular thrombosis such as dural sinus thrombosis and organic brain syndrome manifesting with confusion, seizures, and memory loss.[2] They often appear late in the progression of the disease but are associated with a poor prognosis.

There is no specific pathological testing or technique available for the diagnosis of the disease, although the International Study Group criteria for the disease are highly sensitive and specific, involving clinical criteria and a pathergy test.[2][7] Behçet's disease has a high degree of resemblance to diseases that cause mucocutaneous lesions such as Herpes simplex labialis, and therefore clinical suspicion should be maintained until all the common causes of oral lesions are ruled out from the differential diagnosis.

Visual acuity, or color vision loss with concurrent mucocutaneous lesions and/or systemic Behçet's symptoms should raise suspicion of optic nerve involvement in Behçet's disease and prompt a work-up for Behçet's disease if not previously diagnosed in addition to an ocular work-up. Diagnosis of Behçet's disease is based on clinical findings including oral and genital ulcers, skin lesions such as erythema nodosum, acne, or folliculitis, ocular inflammatory findings and a pathergy reaction. Inflammatory markers such ESR, and CRP may be elevated. A complete ophthalmic examination may include a slit lamp examination, optical coherence tomography to detect nerve loss, visual field examinations, fundoscopic examination to assess optic disc atrophy and retinal disease, fundoscopic angiography, and visual evoked potentials, which may demonstrate increased latency. Optic nerve enhancement may be identified on Magnetic Resonance Imaging (MRI) in some patients with acute optic neuropathy. However, a normal study does not rule out optic neuropathy. Cerebrospinal fluid (CSF) analysis may demonstrate elevated protein level with or without pleocytosis. Imaging including angiography may be indicated to identify dural venous sinus thrombosis as a cause of intracranial hypertension and optic atrophy. 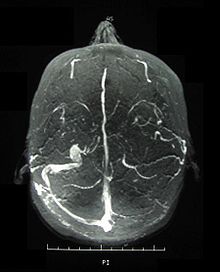 According to the International Study Group guidelines, for a patient to be diagnosed with Behçet's disease,[7] the patient must have oral (aphthous) ulcers (any shape, size or number at least 3 times in any 12 months period) along with 2 out of the following 4 "hallmark" symptoms:

Despite the inclusive criteria set forth by the International Study Group, there are cases where not all the criteria can be met and therefore a diagnosis cannot readily be made. There is however a set of clinical findings that a physician can rely upon in making a tentative diagnosis of the disease; essentially Behçet's disease does not always follow the International Study Group guidelines and so a high degree of suspicion for a patient who presents having any number of the following findings is necessary:

The etiology is not well-defined, but it is primarily characterized by auto-inflammation of the blood vessels. Although sometimes erroneously referred to as a "diagnosis of exclusion," the diagnosis can sometimes be reached by pathologic examination of the affected areas.[8]

The primary mechanism of the damage is an overactive immune system that seems to target the patient's own body. The primary cause is not well known. In fact, as of now, no one knows why the immune system starts to behave this way in Behçet's disease. There does however seem to be a genetic component involved, as first degree relatives of the affected patients are often affected in more than expected proportion for the general population.

Current treatment is aimed at easing the symptoms, reducing inflammation, and controlling the immune system. High dose Corticosteroid therapy (1 mg/kg/d oral prednisone) is indicated for severe disease manifestations.[9] Anti-TNF therapy such as infliximab has shown promise in treating the uveitis associated with the disease.[10][11] Another Anti-TNF agent, Etanercept, may be useful in patients with mainly skin and mucosal symptoms.[12]

Interferon alfa-2a may also be an effective alternative treatment, particularly for the genital and oral ulcers[13] as well as ocular lesions.[14] Azathioprine, when used in combination with interferon alfa-2b also shows promise,[15] and Colchicine can be useful for treating some genital ulcers, erythema nodosum, and arthritis.[16]

Thalidomide has also been used due to its immune-modifying effect.[17] Dapsone and rebamipide have been shown, in small studies, to have beneficial results for mucocutaneous lesions.[18][19]

Given its rarity, the optimal treatment for acute optic neuropathy in Behçet's disease has not been established. Early identification and treatment is essential. Response to ciclosporin, periocular triamcinolone, and IV methylprednisone followed by oral prednisone has been reported although relapses leading to irreversible visual loss may occur even with treatment.[20] Immunosuppressants such as interferon alpha and tumour necrosis factor antagonists may improve though not completely reverse symptoms of ocular Behçet's, which may progress over time despite treatment. When symptoms are limited to the anterior chamber of the eye prognosis is improved. Posterior involvement, particularly optic nerve involvement is a poor prognostic indicator. Secondary optic nerve atrophy is frequently irreversible. Lumbar puncture or surgical treatment may be required to prevent optic atrophy in cases of intracranial hypertension refractory to treatment with immunomodulators and steroids. 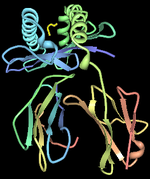 Behçet disease is considered more prevalent in the areas surrounding the old silk trading routes in the Middle East and in Central Asia. Thus, it is sometimes known as Silk Road Disease. However, this disease is not restricted to people from these regions. A large number of serological studies show a linkage between the disease and HLA-B51.[22] HLA-B51 is more frequently found from the Middle East to South Eastern Siberia, but the incidence of B51 in some studies was 3 fold higher than the normal population. However, B51 tends not to be found in disease when a certain SUMO4 gene variant is involved,[23] and symptoms appear to be milder when HLA-B27 is present.[24] At the current time, a similar infectious origin has not yet been confirmed that leads to Behçet's disease, but certain strains of Streptococcus sanguinis has been found to have a homologous antigenicity.[25]

Vasculitis resulting in occlusion of the vessels supplying the optic nerve may be the cause of acute optic neuropathy and progressive optic atrophy in Behçet's disease. Histological evaluation in a reported case of acute optic neuropathy demonstrated substitution of the axonal portion of the optic nerve with fibrous astrocytes without retinal changes.[6] CNS involvement in Behçet's may lead to intracranial hypertension most commonly due to dural venous sinus thrombosis[4] [8-10] and subsequent secondary optic atrophy.

The syndrome is rare in the United States, but is common in the Middle East and Asia, suggesting a possible cause endemic to the tropical areas.[26] It is not associated with cancer, and links with tissue-types (which are under investigation) are not certain. It also does not follow the usual pattern for autoimmune diseases. However, one study has revealed a possible connection to food allergies, particularly to dairy products.[27] An estimated 15,000 to 20,000 Americans have been diagnosed with this disease. In the UK, it is estimated to have about 1 case for every 100,000 people.[28] Globally, males are affected more frequently than females.[29] In the United States, more females are affected than males.[citation needed]

Behçet disease is named after Hulusi Behçet (1889–1948), the Turkish dermatologist and scientist who first recognized the syndrome in one of his patients in 1924 and reported his research on the disease in Journal of Skin and Venereal Diseases in 1936.[30][31] The name (Morbus Behçet) was formally adopted at the International Congress of Dermatology in Geneva in September 1947. Symptoms of this disease may have been described by Hippocrates in the 5th century BC, in his 3rd Epidemion-book.[32] Its first modern formal description was published in 1922.[30]

Some sources use the term "Adamantiades’ syndrome" or "Adamandiades-Behçet syndrome", for the work done by Benediktos Adamantiades.[33] However, the current World Health Organization/ICD-10 standard is "Behçet's disease". In 1991, Saudi Arabian medical researchers described "neuro-Behçet's disease",[34] a neurological involvement in Behçet's disease, considered one of the most devastating manifestations of the disease as investigated by an Egyptian researcher Sahar Saleem.[35] The mechanism can be immune-mediated, or thrombotic.[36] The term dates back to at least 1990.[37]