Cerebral venous sinus thrombosis (CVST) is a rare form of stroke that results from thrombosis (a blood clot) of the dural venous sinuses, which drain blood from the brain. Symptoms may include headache, abnormal vision, any of the symptoms of stroke such as weakness of the face and limbs on one side of the body, and seizures. The diagnosis is usually by computed tomography (CT/CAT scan) or magnetic resonance imaging (MRI) employing radiocontrast to demonstrate obstruction of the venous sinuses by thrombus.[1]

Treatment is with anticoagulants (medication that suppresses blood clotting), and rarely thrombolysis (enzymatic destruction of the blood clot). Given that there is usually an underlying cause for the disease, tests may be performed to look for these. The disease may be complicated by raised intracranial pressure, which may warrant surgical intervention such as the placement of a shunt.[1] There are several other terms for the condition, such as cerebral venous and sinus thrombosis, (superior) sagittal sinus thrombosis, dural sinus thrombosis and intracranial venous thrombosis as well as the older term cerebral thrombophlebitis.

Nine in ten people with sinus thrombosis have a headache; this tends to worsen over the period of several days, but may also develop suddenly (thunderclap headache).[1] The headache may be the only symptom of cerebral venous sinus thrombosis.[2] Many patients have symptoms of stroke: inability to move one or more limbs, weakness on one side of the face or difficulty speaking. This does not necessarily affect one side of the body as in the more common "arterial" stroke.[1]

40% of all patients have seizures, although it is more common still in women who develop sinus thrombosis peripartum (in the period before and after giving birth).[3] These are mostly seizures affecting only one part of the body and unilateral (occurring on one side), but occasionally the seizures are generalised and rarely they lead to status epilepticus (persistent or recurrent seizure activity for a long period of time).[1]

In the elderly, many of the aforementioned symptoms may not occur. Common symptoms in the elderly with this condition are otherwise unexplained changes in mental status and a depressed level of consciousness.[4]

The intracranial pressure (pressure around the brain) may rise, causing papilledema (swelling of the optic disc) which may be experienced as visual obscurations. In severely raised intracranial pressure, the level of consciousness is decreased, the blood pressure rises, the heart rate falls and the patient assumes an abnormal posture.[1]

Cerebral venous sinus thrombosis is more common in particular situations. 85% of patients have at least one of these risk factors:[1] 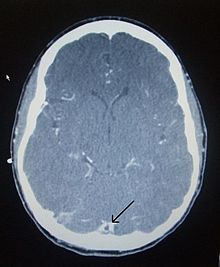 There are various neuroimaging investigations that may detect cerebral sinus thrombosis. Cerebral edema and venous infarction may be apparent on any modality, but for the detection of the thrombus itself, the most commonly used tests are computed tomography (CT) and magnetic resonance imaging (MRI), both using various types of radiocontrast to perform a venogram and visualise the veins around the brain.[1]

Computed tomography, with radiocontrast in the venous phase (CT venography or CTV), has a detection rate that in some regards exceeds that of MRI. The test involves injection into a vein (usually in the arm) of a radioopaque substance, and time is allowed for the bloodstream to carry it to the cerebral veins - at which point the scan is performed. It has a sensitivity of 75-100% (it detects 75-100% of all clots present), and a specificity of 81-100% (it would be incorrectly positive in 0-19%). In the first two weeks, the "empty delta sign" may be observed (in later stages, this sign may disappear).[5]

Magnetic resonance venography employs the same principles, but uses MRI as a scanning modality. MRI has the advantage of being better at detecting damage to the brain itself as a result of the increased pressure on the obstructed veins, but it is not readily available in many hospitals and the interpretation may be difficult.[5]

Cerebral angiography may demonstrate smaller clots than CT or MRI, and obstructed veins may give the "corkscrew appearance".[1] This, however, requires puncture of the femoral artery with a sheath and advancing a thin tube through the blood vessels to the brain where radiocontrast is injected before X-ray images are obtained. It is therefore only performed if all other tests give unclear results or when other treatments may be administered during the same procedure.

A 2004 study suggested that the D-dimer blood test, already in use for the diagnosis of other forms of thrombosis, was abnormal (above 500 μg/l) in 34 out of 35 patients with cerebral sinus thrombosis, giving it a sensitivity of 97.1%, a negative predictive value of 99.6%, a specificity of 91.2%, and a positive predictive value of 55.7%. Furthermore, the level of the D-dimer correlated with the extent of the thrombosis.[6] A subsequent study, however, showed that 10% of patients with confirmed thrombosis had a normal D-dimer, and in those who had presented with only a headache 26% had a normal D-dimer. The study concludes that D-dimer is not useful in the situations where it would make the most difference, namely in lower probability cases.[7]

In most patients, the direct cause for the cerebral sinus thrombosis is not readily apparent. Identifying a source of infection is crucial; it is common practice to screen for various forms of thrombophilia (a propensity to form blood clots).[1]

The veins of the brain, both the superficial veins and the deep venous system, empty into the dural venous sinuses, which carry blood back to the jugular vein and thence to the heart. In cerebral venous sinus thrombosis, blood clots usually form both in the veins of the brain and the venous sinuses. The thrombosis of the veins themselves causes venous infarction–damage to brain tissue due to a congested and therefore insufficient blood supply. This results in cerebral edema (both vasogenic and cytotoxic edema), and leads to small petechial haemorrhages that may merge into large haematomas. Thrombosis of the sinuses is the main mechanism behind the increase in intracranial pressure due to decreased resorption of cerebrospinal fluid (CSF). The condition does not lead to hydrocephalus, however, because there is no difference in pressure between various parts of the brain.[1]

Any blood clot forms due to an imbalance between coagulation (the formation of the insoluble blood protein fibrin) and fibrinolysis. The three major mechanisms for such an imbalance are enumerated in Virchow's triad: alterations in normal blood flow, injury to the blood vessel wall, and alterations in the constitution of blood (hypercoagulability). Most cases of cerebral venous sinus thrombosis are due to hypercoagulability.[1]

It is possible for the clot to break off and migrate (embolise) to the lungs, causing a pulmonary embolism.[1][3] An analysis of earlier case reports concludes that this occurs in about 10% of cases, but has a very poor prognosis.[8]

Various studies have investigated the use of anticoagulation to suppress blood clot formation in cerebral venous sinus thrombosis. Before these trials had been conducted, there had been a concern that small areas of hemorrhage in the brain would bleed further as a result of treatment; the studies showed that this concern was unfounded.[9] Clinical practice guidelines now recommend heparin or low molecular weight heparin in the initial treatment, followed by warfarin, provided there are no other bleeding risks that would make these treatments unsuitable.[3][10][11] Some experts discourage the use of anticoagulation if there is extensive hemorrhage; in that case, they recommend repeating the imaging after 7–10 days. If the hemorrhage has decreased in size, anticoagants are commenced, while no anticoagulants are given if there is no reduction.[12]

The duration of warfarin treatment depends on the circumstances and underlying causes of the condition. If the thrombosis developed under temporary circumstances (e.g. pregnancy), three months are regarded as sufficient. If the condition was unprovoked but there are no clear causes or a "mild" form of thrombophilia, 6 to 12 months is advised. If there is a severe underlying thrombosis disorder, warfarin treatment may need to continue indefinitely.[3]

Thrombolysis (removal of the blood clot with "clot buster" medication) has been described, either systemically by injection into a vein or directly into the clot during angiography. The 2006 European Federation of Neurological Societies guideline recommends that thrombolysis is only used in patients who deteriorate despite adequate treatment, and other causes of deterioration have been eliminated. It is unclear which drug and which mode of administration is the most effective. Bleeding into the brain and in other sites of the body is a major concern in the use of thrombolysis.[3] American guidelines make no recommendation with regards to thrombolysis, stating that more research is needed.[11]

Raised intracranial pressure, if severe or threatening vision, may require therapeutic lumbar puncture (removal of excessive cerebrospinal fluid), medication (acetazolamide), or neurosurgical treatment (optic nerve sheath fenestration or shunting).[1] In certain situations, anticonvulsants may be used to prevent seizures; these are focal neurological problems (e.g. inability to move a limb) and/or focal changes of the brain tissue on CT or MRI scan.[3]

In 2004 the first adequately large scale study on the natural history and long-term prognosis of this condition was reported; this showed that at 16 months follow-up 57.1% of patients had full recovery, 29.5%/2.9%/2.2% had respectively minor/moderate/severe symptoms or impairments, and 8.3% had died. Severe impairment or death were more likely in those aged over 37 years, male, affected by coma, mental status disorder, intracerebral hemorrhage, thrombosis of the deep cerebral venous system, central nervous system infection and cancer.[13] A subsequent systematic review of nineteen studies in 2006 showed that mortality is about 5.6% during hospitalisation and 9.4% in total, while of the survivors 88% make a total or near-total recovery. After several months, two thirds of the cases has resolution ("recanalisation") of the clot. The rate of recurrence was low (2.8%).[14]

In children with CVST, the mortality averages 50%. Poor outcome is more likely if a child with CVST develops seizures or has evidence of venous infarction on imaging.[15]

Cerebral venous sinus thrombosis is rare, with an estimated 3-4 cases per million annual incidence in adults. While it may occur in all age groups, it is most common in the third decade. 75% are female.[3] Given that older studies show no difference in incidence between men and women, it has been suggested that the use of oral contraceptives in women is behind the disparity between the sexes.[1] A 1995 report from Saudi Arabia found a doubled incidence at 7 cases per 100,000; this was attributed to the fact that Behçet's disease, which increases risk of CVST, is more common in the Middle East.[16]

A 1973 report found that CVST could be found on autopsy (examination of the body after death) in nine percent of all people. Many of these were elderly and had neurological symptoms in the period leading up to their death, and many suffered from concomitant heart failure.[17]

In children, a Canadian study reported in 2001 that CVST occurs in 6.7 per million annually. 43% occur in the newborn (less than one month old), and a further 10% in the first year of life. Of the newborn, 84% were already ill, mostly from complications after childbirth and dehydration.[15]

The first description of thrombosis of the cerebral veins and sinuses is attributed to the French physician Ribes, who in 1825 observed thrombosis of the saggital sinus and cerebral veins in a man who had suffered from seizures and delirium.[18] Until the second half of the 20th century it remained a diagnosis generally made after death.[19] In the 1940s, reports by Dr Charles Symonds and others allowed for the clinical diagnosis of cerebral venous thrombosis, using characteristic signs and symptoms and results of lumbar puncture.[20][21]

Improvements on the diagnosis of cerebral venous sinus thrombosis in life were made with the introduction of venography in 1951,[22] which also aided in the distinction from idiopathic intracranial hypertension,[23] which has similar presenting signs and symptoms in many cases.[19]

The British gynecologist Stansfield is credited with the introduction, in 1942, of the just recently introduced anticoagulant heparin in the treatment of CVST in 1942.[19][21] Clinical trials in the 1990s finally resolved the concern about using anticoagulants in most cases of CVST.[3]