The infarction leads to death of the ipsilateral medullary pyramid, the medial leminiscus, and hypoglossal nerve fibers that pass through the medulla. The spinothalamic tract is spared because it is located more laterally in the brainstem and is not supplied by the anterior spinal artery, but rather by the vertebral and posterior inferior cerebellar arteries. The trigeminal nucleus is also spared, since most of it is higher up in the pons, and the spinal part of it found in the medulla is lateral to the infarct.

The condition usually consists of: 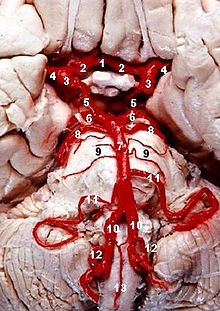 Sensation to the face is preserved, due to the sparing of the trigeminal nucleus.

The syndrome is said to be "alternating" because the lesion causes symptoms both contralaterally and ipsilaterally. Sensation of pain and temperature is preserved, because the spinothalamic tract is located more laterally in the brainstem and is also not supplied by the anterior spinal artery (instead supplied by the posterior inferior cerebellar arteries and the vertebral arteries).