An alkylating agent adds an alkyl group (CnH2n+1) to DNA. It attaches the alkyl group to the guanine base of DNA, at the number 7 nitrogen atom of the imidazole ring.

It is used to treat various types of cancer and some autoimmune disorders. It is a "prodrug"; it is converted in the liver to active forms that have chemotherapeutic activity.

The main use of cyclophosphamide is together with other chemotherapy agents in the treatment of lymphomas, some forms of leukemia[3] and some solid tumors.[4] It is a chemotherapy drug that works by slowing or stopping cell growth. 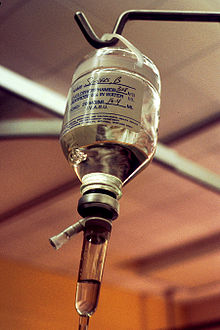 A 2004 study[10] showed that the biological actions of cyclophosphamide are dose-dependent. At higher doses, it is associated with increased cytotoxicity and immunosuppression, while at low continuous dosage it shows immunostimulatory and antiangiogenic properties. A 2009 study of 17 patients with docetaxel-resistant metastatic hormone refractory prostate cancer showed a Prostate-specific antigen (PSA) decrease in 9 of the 17 patients. Median survival was 24 months for the entire group, and 60 months for those with a PSA response. The study concluded that low-dose cyclophosphamide "might be a viable alternative" treatment for docetaxel-resistant MHRPC and "is an interesting candidate for combination therapies, e.g., immunotherapy, tyrosine kinase inhibitors, and antiangiogenisis."[11]

Recent clinical studies have shown that cyclophosphamide induce beneficial immunomodulatory effects in the context of adaptive immunotherapy. Although the mechanisms underlying these effects are not fully understood, several mechanisms have been suggested based on potential modulation of the host environment, including[citation needed]:

The main effect of cyclophosphamide is due to its metabolite phosphoramide mustard. This metabolite is only formed in cells that have low levels of ALDH.

Phosphoramide mustard forms DNA crosslinks both between and within DNA strands at guanine N-7 positions (known as interstrand and intrastrand crosslinkages, respectively). This is irreversible and leads to cell death.

Cyclophosphamide has relatively little typical chemotherapy toxicity as ALDHs are present in relatively large concentrations in bone marrow stem cells, liver and intestinal epithelium. ALDHs protect these actively proliferating tissues against toxic effects phosphoramide mustard and acrolein by converting aldophosphamide to carboxyphosphamide that does not give rise to the toxic metabolites (phosphoramide mustard and acrolein)..

Many people taking cyclophosphamide do have serious side effects. Side-effects include chemotherapy-induced nausea and vomiting (CINV), bone marrow suppression, stomach ache, diarrhea, darkening of the skin/nails, alopecia (hair loss) or thinning of hair, changes in color and texture of the hair, and lethargy. Hemorrhagic cystitis is a frequent complication, but this is prevented by adequate fluid intake and Mesna (sodium 2-mercaptoethane sulfonate). Mesna is a sulfhydryl donor and binds acrolein.

Cyclophosphamide is itself carcinogenic, potentially causing transitional cell carcinoma of the bladder as a long-term complication. It can lower the body's ability to fight an infection. It can cause temporary or (rarely) permanent sterility. A serious potential side-effect is Acute Myeloid Leukemia, referred to as secondary AML, due to it occurring secondarily to the primary disease being treated. The risk may be dependent on dose and a number of other factors, including the condition being treated, other agents or treatment modalities used (including radiotherapy), treatment intensity and length of treatment. For some regimens it is a very rare occurrence. For instance, CMF-therapy for breast cancer (where the cumulative dose is typically less than 20 grams of cyclophosphamide) seems to carry an AML risk of less than 1/2000th, with some studies even finding no increased risk compared to the background population. Other treatment regimens involving higher doses may carry risks of 1-2% or higher, depending on regimen. Cyclophosphamide-induced AML, when it happens, typically presents some years after treatment, with incidence peaking around 3–9 years. After 9 years, the risk has fallen to the level of the regular population. When AML occurs, it is often preceded by a Myelodysplastic syndrome phase, before developing into overt acute leukemia. Cyclophosphamide-induced leukemia will often involve complex cytogenetics, which carries a worse prognosis than de novo AML.

Other (serious) side effects include:

Cyclophosphamide and the related nitrogen mustard-derived alkylating agent ifosfamide were developed by Norbert Brock and ASTA (now Baxter Oncology). Brock and his team synthesised and screened more than 1,000 candidate oxazaphosphorine compounds.[13] They converted the base nitrogen mustard into a non-toxic "transport form". This transport form was a pro-drug, subsequently actively transported into the cancer cells. Once in the cells, the pro-drug was enzymatically converted into the active, toxic form. The first clinical trials were published at the end of the 1950s.[14][15][16]