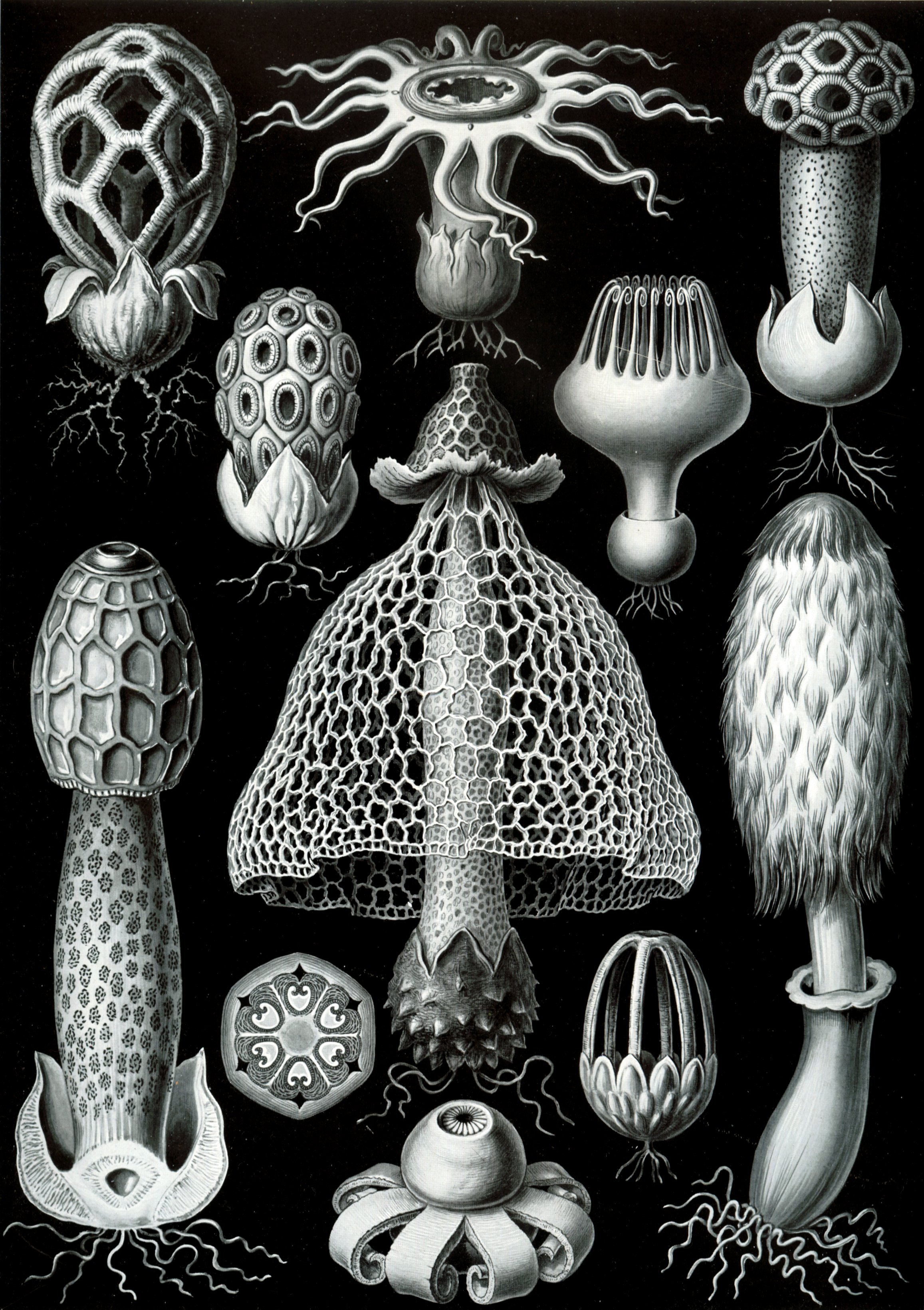 Basidiomycota is one of two large phyla that, together with the , comprise the subkingdom , which were in general what were called the "Higher Fungi" within the Kingdom . More specifically the Basidiomycota include s, , , , other , , , chanterelles, earth stars, smuts, bunts, rusts, , and the human pathogenic yeast, "". Basically, Basidiomycota are filamentous fungi composed of (except for those forming yeasts), and reproducing sexually via the formation of specialized club-shaped end cells called that normally bear external s (usually four), which are specialized meiospores called s. However, some Basidiomycota reproduce asexually, and may or may not also reproduce sexually. Asexually reproducing Basidiomycota (discussed below) can be recognized as members of this phylum by gross similarity to others, by the formation of a distinctive anatomical feature (the - see below), components, and definitively by molecular analysis of data.

The most recent classification

The Basidiomycota had traditionally been divided into 2 obsolete classes, the (including true ); and the (the Jelly, Rust and Smut fungi). Previously the entire Basidiomycota were called Basidiomycetes, an invalid class level name coined in 1959 as a counterpart to the , when neither of these taxa were recognized as phyla. The terms basidiomycetes and ascomycetes are frequently used loosely to refer to Basidiomycota and Ascomycota. They are often abbreviated to "basidios" and "ascos" as mycological slang.

The (see details on that page) includes what had previously been called the (an obsolete morphological based class of Basidiomycota that formed layers on their fruitbodies), the (another obsolete class that included species mostly lacking hymenia and mostly forming spores in enclosed fruitbodies), as well as most of the .

The are most (but not all) of the former smut fungi and along with the .

The includes the rust fungi, the insect parasitic/symbiotic genus "", a former group of smut fungi (in the , which includes mirror yeasts), and a mixture of odd, infrequently seen or seldom recognized fungi, often parasitic on plants.

Two classes, and cannot at present be placed in a subphylum.

Unlike higher animals and plants which have readily recognizable male and female counterparts, Basidiomycota (except for the Rust ()) tend to have mutually indistinguishable, compatible s which are usually being composed of filamentous . Typically haploid Basidiomycota mycelia fuse via and then the compatible nuclei migrate into each other's mycelia and pair up with the resident nuclei. is delayed, so that the compatible nuclei remain in pairs, called a . The hyphae are then said to be . Conversely, the haploid mycelia are called s. Often, the dikaryotic mycelium is more vigorous than the individual monokaryotic mycelia, and proceeds to take over the substrate in which they are growing. The dikaryons can be long-lived, lasting years, decades, or centuries. "The monokaryons are neither male nor female". They have either a bipolar (unifactorial) or a tetrapolar (bifactorial) mating system. This results in the fact that following , the resulting haploid and resultant monokaryons, have nuclei that are compatible with 50% (if bipolar) or 25% (if tetrapolar) of their sister basidiospores (and their resultant monokaryons) because the mating genes must differ for them to be compatible. However, there are many variations of these genes in the population, and therefore, over 90% of monokaryons are compatible with each other. It is as if there were multiple sexes.

The maintenance of the dikaryotic status in dikaryons in many Basidiomycota is facilitated by the formation of s that physically appear to help coordinate and re-establish pairs of compatible nuclei following synchronous nuclear divisions. Variations are frequent and multiple. In a typical Basidiomycota lifecycle the long lasting dikaryons periodically (seasonally or occasionally) produce , the specialized usually club-shaped end cells, in which a pair of compatible nuclei fuse () to form a cell. follows shortly with the production of 4 haploid nuclei that migrate into 4 external, usually apical . Variations occur, however. Typically the basidiospores are , hence they are sometimes also called s. In most species, the basidiospores disperse and each can start a new haploid mycelium, continuing the lifecycle. Basidia are microscopic but they are often produced on or in multicelled large fructifications called or s, or fruitbodies), variously called , , etc. Ballistic basidiospores are formed on sterigmata which are tapered spine-like projections on basidia, and are typically curved, like the horns of a bull. In some Basidiomycota the spores are not ballistic, and the sterigmata may be straight, reduced to stubbs, or absent. The basidiospores of these non-ballistosporic basidia may either bud off, or be released via dissolution or disintegration of the basidia.

In summary, meiosis takes place in a diploid basidium. Each one of the four haploid nuclei migrates into its own basidiospore. The basidiospores are ballistically discharged and start new haploid mycelia called monokaryons. There are no males or females, rather there are compatible thalli with multiple compatibility factors. Plasmogamy between compatible individuals leads to delayed karyogamy leading to establishment of a dikaryon. The dikaryon is long lasting but ultimately gives rise to either fruitbodies with basidia or directly to basidia without fruitbodies. The paired dikaryon in the basidium fuse (i.e karyogamy takes place). The diploid basidium begins the cycle again.

Many variations occur. Some are self compatible and spontaneously form dikaryons without a separate compatible thallus being involved. These fungi are said to be "homothallic", versus the normal "heterothallic" species with mating types. Others are secondarily homothallic, in that two compatible nuclei following meiosis migrate into each basidiospore, which is then dispersed as a pre-existing dikaryon. Often such species form only two spores per basidium, but that too varies. Following meiosis, mitotic divisions can occur in the basidium. Multiple numbers of basidiospores can result, including odd numbers via degeneration of nuclei, or pairing up of nuclei, or lack of migration of nuclei. For example, the chanterelle genus "" often has 6-spored basidia, while some corticioid "" species can have 2-, 4-, 6-, or 8-spored basidia, and the cultivated button mushroom, "". can have 1-, 2-, 3- or 4-spored basidia under some circumstances. Occasionally monokaryons of some taxa can form morphologically fully formed basidiomes and anatomically correct basidia and ballistic basidiospores in the absence of dikaryon formation, diploid nuclei, and meiosis. A rare few number of taxa have extended diploid life-cycles, but can be common species. Examples exist in the mushroom genera "" and "", both in the . Occasionally basidiospores are not formed and parts of the "basidia" act as the dispersal agents, e.g. the peculiar mycoparasitic jelly fungus, "" or the entire "basidium" acts as a "spore", e.g. in some false puffballs ("Scleroderma"). In the human pathogenic genus "" 4 nuclei following meiosis remain in the basidium but continually divide mitotically, each nucleus migrating into synchronously forming nonballistic basidiospores that are then pushed upwards by another set forming below them, resulting in 4 parallel chains of dry "basidiospores".

Other variations occur, some as standard life-cycles (that themselves have variations within variations) within specific orders.

Rusts (, previously known as ) at their greatest complexity produce five different types of spores on two different hosts in two unrelated host families. Such rusts are heteroecious (requiring 2 hosts) and macrocyclic (producing all 5 spores types). Wheat is an example. By convention the stages and spore states are numbered by . Typically, basidiospores infect host one, the mycelium forms , called , which are miniature, flask-shaped, hollow, submicroscopic bodies embedded in host tissue (such as a leaf). This stage, numbered "0", produces single-celled, minute spores that ooze out in a sweet liquid and that act as nonmotile , and also protruding . s and probably other vectors such as rain carry the spermatia from spermagonia to spermagonia, cross inoculating the mating types. Neither thallus is male or female. Once crossed, the dikaryons are established and a second spore stage is formed, numbered "I" and called , which form dikaryotic in dry chains in inverted cup-shaped bodies embedded in host tissue. These aeciospores then infect the second host genus and cannot infect the host on which they are formed (in macrocyclic rusts). On the second host a repeating spore stage is formed, numbered "II", the in dry pustules called . Urediospores are dikaryotic and can infect the same host that produced them. They repeatedly infect this host over the growing season. At the end of the season, a fourth spore type, the , is formed. It is thicker-walled and serves to overwinter or to survive other harsh conditions. It does not continue the infection process, rather it remains dormant for a period and then germinates to form (stage "IV"), sometimes called a . In the Pucciniales, the basidia are cylindrical and become 3-te after meiosis, with each of the 4 cells bearing one basidiospore each. The basidospores disperse and start the infection process on host 1 again. rusts complete their life-cycles on one host intead of two, and microcyclic rusts cut out one or more stages.

The characteristic part of the life-cycle of smuts is the thick-walled, often darkly pigmented, ornate, teliospore that serves to survive harsh conditions such as overwintering and also serves to help disperse the fungus as dry diaspores. The teliospores are initially dikaryotic but become diploid via karyogamy. Meiosis takes place at the time of germination. A promycelim is formed that consists to a short hypha (equated to a basidium). In some smuts such as "" the nuclei migrate into the promycelium that becomes te, and haploid yeast-like conidia/basidiospores sometimes called sporidia, bud off laterally from each cell. In various smuts, the yeast phase may proliferate, or they may fuse, or they may infect plant tissue and become hyphal. In other smuts, such as "Tilletia caries", the elongated haploid basidiospores form apically, often in compatible pairs that fuse centrally resulting in "H"-shaped diaspores which are by then dikaryotic. Dikaryotic conidia may then form. Eventually the host is infected by infectious hyphae. Teliospores form in host tissue. Many variations on these general themes occur.

Basidiomycota are smuts with both a yeast phase and an infectious hyphal state are examples of dimorphic Basidiomycota. In plant parasitic taxa, the saprotrophic phase is normally the yeast while the infectious stage is hyphal. However, there are examples of animal and human parasites where the species are dimorphic but it is the yeast-like state that is infectious. The genus "" forms basidia on hyphae but the main infectious stage is more commonly known by the ic yeast name "", e.g. "" and "".

The dimorphic Basidiomycota with yeast stages and the pleiomorphic rusts are examples of fungi with s, which are the asexual stages. Some Basidiomycota are only known as anamorphs. Many are yeasts, collectively called basidiomycetous yeasts to differentiate them from ascomycetous yeasts in the . Aside from yeast anamorphs, and uredinia, aecia and pycnidia, some Basidiomycota form other distinctive anamorphs as parts of their life-cycles. Examples are "s called gemmae.