A paraganglioma is a rare neuroendocrine neoplasm that may develop at various body sites (including the head, neck, thorax and abdomen). About 97% are benign and cured by surgical removal; the remaining 3% are malignant because they are able to produce distant metastases. Paragangliomas are still sometimes referred to using older, obsolete terminology (for example as "chemodectomas" or "glomus jugularis", the latter not to be confused with glomus tumors of the skin).

Paragangliomas originate from chromaffin cells in paraganglia or chromaffin-negative glomus cells derived from the embryonic neural crest, functioning as part of the sympathetic nervous system (a branch of the autonomic nervous system). These cells normally act as special chemoreceptors located along blood vessels, particularly in the carotid bodies (at the bifurcation of the common carotid artery in the neck) and in aortic bodies (near the aortic arch).

Accordingly, paragangliomas are categorised as originating from a neural cell line in the World Health Organization classification of neuroendocrine tumors. In the categorization proposed by Wick, paragangliomas belong to group II.[1] Given the fact that they originate from cells of the orthosympathetic system, paragangliomas are closely related to phaeochromocytomas, which however are chromaffine-positive.

Most paragangliomas are either asymptomatic or present as a painless mass. While all contain neurosecretory granules, only in 1–3% of cases is secretion of hormones such as catecholamines abundant enough to be clinically significant; in that case manifestations often resemble those of phaeochromocytomas.

About 75% of paragangliomas are sporadic; the remaining 25% are hereditary (and have an increased likelihood of being multiple and of developing at an earlier age). Mutations of the genes SDHD (previously known as PGL1), PGL2, and SDHC (previously PGL3) have been identified as causing familial head and neck paragangliomas. Mutations of SDHB play an important role in familial adrenal pheochromocytoma and extra-adrenal paraganglioma (of abdomen and thorax), although there is considerable overlap in the types of tumors associated with SDHB and SDHD gene mutations. Paragangliomas may also occur in MEN type 2A and 2B. 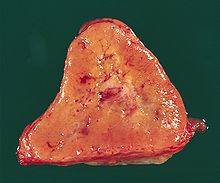 Mediastinal paraganglioma. The cut surface of a 3.9 x 3.5 x 2.5 cm tumor is triangular, with a bulging peripheral portion and a somewhat fibrotic center. It was surrounded by the heart, left lower lobe of the lung, aorta, esophagus, and diaphragm, and had been 1.8 cm in diameter 7 years before.

Micrograph of a carotid body tumor with the characteristic Zellballen. H&E stain.

The paragangliomas appear grossly as sharply circumscribed polypoid masses and they have a firm to rubbery consistency. They are highly vascular tumors and may have a deep red color.

On microscopic inspection, the tumor cells are readily recognized. Individual tumor cells are polygonal to oval and are arranged in distinctive cell balls, called Zellballen.[2] These cell balls are separated by fibrovascular stroma and surrounded by sustentacular cells.

About 85% of paragangliomas develop in the abdomen; only 12% develop in the chest and 3% in the head and neck region (the latter are the most likely to be symptomatic). While most are single, rare multiple cases occur (usually in a hereditary syndrome). Paragangliomas are described by their site of origin and are often given special names:-

The main treatment modalities are surgery, embolization[4] and radiotherapy.[5]