A vestibular schwannoma, often called an acoustic neuroma,[1] is a benign primary intracranial tumor of the myelin-forming cells of the vestibulocochlear nerve (CN VIII).[2] The term "vestibular schwannoma" involves the vestibular portion of the 8th cranial nerve[3] and arises from Schwann cells, which are responsible for the myelin sheath in the peripheral nervous system. Approximately 3,000 cases are diagnosed each year in the United States with a prevalence of about 1 in 100,000 worldwide. It comprises 5-10% of all intracranial neoplasms in adults. Incidence peaks in the fifth and sixth decades and both sexes are affected equally.

The earliest symptoms of acoustic neuromas include ipsilateral sensorineural hearing loss/deafness, disturbed sense of balance and altered gait, vertigo with associated nausea and vomiting, and pressure in the ear, all of which can be attributed to the disruption of normal vestibulocochlear nerve function. Additionally more than 80% of patients have reported tinnitus (most often a unilateral high-pitched ringing, sometimes a machinery-like roaring or hissing sound, like a steam kettle).

Large tumors that compress the adjacent brainstem may affect other local cranial nerves. Paradoxically, the 7th cranial nerves are rarely involved pre-operatively; involvement of the trigeminal nerve (CN V) may lead to loss of sensation in the involved side's face and mouth. The glossopharyngeal and vagus nerves are uncommonly involved, but their involvement may lead to altered gag or swallowing reflexes.

Larger tumors may lead to increased intracranial pressure, with its associated symptoms such as headache, vomiting, and altered consciousness.

Patients with a severe or profound unilateral hearing loss following the removal of an acoustic neuroma tumour are significantly disabled in a number of situations such as hearing sounds from the deaf side, hearing in the presence of background noise (both in quiet and noisy surroundings) and localising sounds.[4][5]

The perceived hearing handicap may even be greater in unilateral losses than in bilateral.[6] It has also been reported that patients with unilateral hearing loss experience difficulties in group discussions and dynamic listening situations where there is limited possibility to compensate for the handicap by changing listening position.[6]

It is recommended that the hearing difficulties after tumour removal should be thoroughly examined with each patient and rehabilitative options discussed.[4]

Acoustic neuromas may occur sporadically (meaning the cause is unknown),[7] or in some cases occur as part of von Recklinghausen neurofibromatosis, in which case the neuroma may take on one of two forms.

The usual tumor in the adult presents as a solitary tumor, originating in the nerve. It usually arises from the vestibular portion of the 8th nerve, just within the internal auditory canal. As the tumor grows, it usually extends into the posterior fossa to occupy the angle between the cerebellum and the pons (cerebellopontine angle). Because of its position, it may also compress the 5th, 7th, and less often, the 9th and 10th cranial nerves. Later, it may compress the pons and lateral medulla, causing obstruction of the cerebrospinal fluid and increased intracranial pressure. 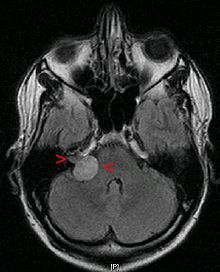 Acoustic neuroma on the right with a size of 20x22x25mm 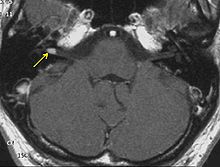 Contrast-enhanced CT will detect almost all acoustic neuromas that are greater than 2.0 cm in diameter and project further than 1.5 cm into the cerebellopontine angle. Those tumors that are smaller may be detected by MRI with gadolinium enhancement. Audiology and vestibular tests should be concurrently evaluated using air conduction and bone conduction threshold testing to assess for sensorineural versus conduction hearing loss.

Indicated treatments for acoustic neuroma include surgical removal and radiotherapy. About 25% of all acoustic neuromas are treated with medical management consisting of a periodic monitoring of the patient's neurological status, serial imaging studies, and the use of hearing aids when appropriate.[9]

Because these neuromata grow so slowly, a physician may opt for conservative treatment beginning with an observation period. In such a case, the tumor is monitored by annual MRI to monitor growth. This route is common among patients over 70 years old.[8] Records suggest that about 45% of acoustic neuromata do not grow detectably over the 3–5 years of observation.[10] In rare cases, acoustical neuromata have been known to shrink spontaneously.[10] Often people with acoustic neuromata die of other causes before the neuroma becomes life-threatening. This is especially true of elderly people possessing a small neuroma.

Since the growth rate of an acoustic neuroma rarely accelerates, annual observation is sufficient. Acoustic neuromata may cause either gradual or—less commonly—sudden hearing loss and tinnitus.

Removal of acoustic neuromas may be performed using several approaches. Each approach has its advantages and disadvantages. Microsurgery for acoustic neuroma is the only technique that removes the tumor. Radiation treatment (discussed in another section) does not remove the tumor, but has the potential to slow or stop its growth. Surgery is the only treatment that will definitively treat balance symptoms associated with tumor growth, as the vestibular nerves are removed at surgery.

Surgery cannot repair damage that has already occurred to the facial or hearing nerves. Even after surgery, there is a small chance that the neuroma will grow back and follow-up MRI scans are necessary.

Choice of surgical approach is based on the patient's age, medical condition, size of tumor, and preoperative hearing thresholds and speech discrimination, as well as other tests such as electronystagmography, imaging, and auditory brainstem response testing. The patient's and surgeon's preferences also play a significant role.

During removal of the tumor, the tumor along with the superior and inferior vestibular nerves are removed. This results in an acute loss of vestibular input to the brain from the operated side. However, vestibular function improves rapidly due to compensation by the other ear and other balance mechanisms.

Surgery carries risk to the facial nerve which may therefore be monitored during the procedure. Best results (normal or near normal facial function) are more likely with small acoustic neuromas.

Three surgical approaches are commonly used. The first is the translabyrinthine approach, which destroys hearing in the affected ear. Thus, it is often employed in patients who already have poor speech discrimination in the affected ear. Any size tumor may be removed with this approach. There is no brain retraction with this approach, so it is often considered the safest route to remove the tumor. In patients with neurofibromatosis type 2 who undergo auditory brainstem implantation, this technique is used as it provides the most direct path of access to the lateral recess and cochlear nucleus, where the device is placed.

The two other approaches (suboccipital retrosigmoid and middle fossa) are hearing preservation approaches, which have a chance of preserving some or all of the hearing in the affected ear. Neurosurgeons often prefer the retrosigmoid approach, as they are frequently more familiar with it from training.

A less common approach is minimally invasive endoscopic surgery. This approach is available in specialized centers.

Acoustic neuroma surgery is highly technically demanding. It may be performed by neurosurgeons or otolaryngologists, alone or together.

Radiation therapy is done in a variety of ways, but mainly by four methods: CyberKnife, gamma knife radiosurgery, fractionated stereotactic radiotherapy, with a linear accelerator (linac), or proton therapy.[11] In the gamma knife approach, 201 beams of gamma radiation are focused on the tumor in a single session. The damage to the tumor at the convergence point may cause it to stop growing but usually does not cause it to shrink in the long term. It may cause short-term shrinkage due to necrosis in the tumor. The damage may be to the tumor cells and/or to the tumor vasculature.

It is not clear what percentage of tumors are controlled by this method for long periods. In earlier times when higher radiation doses were used, the failure rate was about 12% (which then required surgery). Most surgeons feel that these tumors are much more difficult to remove after radiation treatment. Radiation does not remove the tumor, and when irradiated tumors are surgically removed, it is often found that they have growing tumor cells in them.

Two risks of radiation treatment are carcinogenic progression of the acoustic neuroma (conversion from benign to malignant) or induction of other tumors (such as glioblastoma) in the nearby irradiated brain tissue. The incidence of these events appears to be low, and it is often said to be one in one thousand or less (however, the incidence is markedly higher in patients with neurofibromatosis Type 2). This calculation is done by dividing the number of obvious cases of tumorigenic progression or secondary tumor reported in the medical literature by the estimated number of gamma knife procedures done in the world to date. This is not a scientifically valid method of estimating the carcinogenic risk of medical radiation exposures, and involves a list of very questionable assumptions.

The proper and scientifically valid way to estimate such risks can be found at the web site of the Health Physics Society, where estimates of the risks of CT scans and other procedures can be found. These calculations have never been made for gamma knife radiosurgery.

Due to the possibility of regrowth and the possibility of tumorigenic progression or secondary tumors, it is essential that radiation treatments for acoustic neuromas be followed by yearly MRI for the rest of the patient's life. MRIs at this time (2007) cost between $1,500-$3,000. Long-term secondary effects (for instance cognitive effects) on a scale of 10–20 years are not yet established for gamma knife surgery.

Fractionated stereotactic therapy involves a beam of ionizing radiation focused on the tumor from a moving gantry. The beam is wider and less accurate than that of the gamma knife. The total dose is also much higher than that used in gamma knife radiosurgery, but the fractionation of the dose (done on many different days) spares normal tissue. This method has not been done on as many patients as gamma knife procedures and there have not been as many years of follow-up study. This means that the tumor control by this method is not yet established, and the incidence of secondary effects of the radiation are not yet known. There are a number of variations on the linac machine, which can confuse patients. The best known are the "Peacock" which is essentially a modified collimator, and the Cyberknife which uses a miniature linac machine attached to a robot arm which is guided using x-ray imaging to check the position of the patient between each treatment shot.

A proton therapy machine uses a beam of protons to kill the tumour and a cyclotron is used to generate the beam. This is preferable to the x-rays used by the linac and gamma knife machines as the protons can be stopped before they exit the tumor, thus reducing damage to normal tissue.