Myelin is a dielectric (electrically insulating) material that forms a layer, the myelin sheath, usually around only the axon of a neuron. It is essential for the proper functioning of the nervous system. Myelin is an outgrowth of a type of glial cell. The production of the myelin sheath is called myelination. In humans, the production of myelin begins in the fourteenth week of fetal development, although little myelin exists in the brain at the time of birth. During infancy, myelination occurs quickly and continues through the adolescent stages of life.

Schwann cells supply the myelin for peripheral neurons, whereas oligodendrocytes, specifically of the interfascicular type, myelinate the axons of the central nervous system. Myelin is considered a defining characteristic of the (gnathostome) vertebrates, but myelin-like sheaths have also arisen by parallel evolution in some invertebrates, although they are quite different from vertebrate myelin at the molecular level.[1] Myelin was discovered in 1854 by Rudolf Virchow.[2]

Myelin may be made by different cell types varies in chemical composition and configuration, but performs the same insulating function. Myelinated axons are white in appearance, hence the "white matter" of the brain.

Myelin is about 40 % water; the dry mass of myelin is about 70 - 85 % lipids and about 15 - 30 % proteins. Some of the proteins that make up myelin are myelin basic protein (MBP), myelin oligodendrocyte glycoprotein (MOG), and proteolipid protein (PLP). The primary lipid of myelin is a glycolipid called galactocerebroside. The intertwining hydrocarbon chains of sphingomyelin serve to strengthen the myelin sheath. 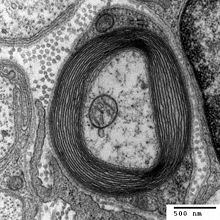 The main purpose of a myelin layer (or sheath) is to increase the speed at which impulses propagate along the myelinated fiber. Along unmyelinated fibers, impulses move continuously as waves, but, in myelinated fibers, they hop or "propagate by saltation." Myelin increases electrical resistance across the cell membrane by a factor of 5,000 and decreases capacitance by a factor of 50.[citation needed] Thus, myelination helps prevent the electrical current from leaving the axon.

When a peripheral fiber is severed, the myelin sheath provides a track along which regrowth can occur. Unfortunately, the myelin layer does not ensure a perfect regeneration of the nerve fiber. Some regenerated nerve fibers do not find the correct muscle fibers and some damaged motor neurons of the PNS die without re-growth. Damage to the myelin sheath and nerve fiber is often associated with increased functional insufficiency.

Some studies reveal that optic nerve fibers can be regenerated in postnatal rats. This optic nerve regeneration depends upon two conditions: axonal die-back has to be prevented with appropriate neurotrophic factors and neurite growth inhibitory components have to be inactivated. This study may lead to further understanding of nerve fiber regeneration in the central nervous system.[citation needed]

Disorders of the myelin sheath

Demyelination is the loss of the myelin sheath insulating the nerves, and is the hallmark of some neurodegenerative autoimmune diseases, including multiple sclerosis, acute disseminated encephalomyelitis, transverse myelitis, chronic inflammatory demyelinating polyneuropathy, Guillain-Barré Syndrome, central pontine myelinosis, inherited demyelinating diseases such as Leukodystrophy, and Charcot Marie Tooth. Sufferers of pernicious anaemia can also suffer nerve damage if the condition is not diagnosed quickly. Sub-acute combined degeneration of the spinal cord secondary to pernicious anaemia can lead to anything from slight peripheral nerve damage to severe damage to the central nervous system, affecting speech, balance and cognitive awareness. When myelin degrades, conduction of signals along the nerve can be impaired or lost and the nerve eventually withers.

The immune system may play a role in demyelination associated with such diseases, including inflammation causing demyelination by overproduction of cytokines via upregulation of tumor necrosis factor (TNF)[3] or interferon.

Demyelination results in diverse symptoms determined by the functions of the affected neurons. It disrupts signals between the brain and other parts of the body; symptoms differ from patient to patient, and have different presentations upon clinical observation and in laboratory studies.

Research to repair damaged myelin sheaths is ongoing. Techniques include surgically implanting oligodendrocyte precursor cells in the central nervous system and inducing myelin repair with certain antibodies. While there have been some encouraging results in mice (via stem cell transplantation), it is still unknown whether this technique can be effective in replacing myelin loss in humans.[4] Some researchers hypothesize that cholinergic treatments, such as acetylcholinesterase inhibitors (AChEIs), may have beneficial effects on myelination, myelin repair, and myelin integrity. It is argued that increasing cholinergic stimulation also acts through subtle trophic effects on brain developmental processes and particularly on oligodendrocytes and the lifelong myelination process they support. It is possible that by increasing oligodendrocyte cholinergic stimulation, AChEIs and other cholinergic treatments like nicotine could promote myelination during development and myelin repair in older age.[5]

Dysmyelination is characterized by a defective structure and function of myelin sheaths; unlike demyelination, it does not produce lesions. Such defective sheaths often arise from genetic mutations affecting the biosynthesis and formation of myelin. The shiverer mouse represents one animal model of dysmyelination. Human diseases where dysmyelination has been implicated include leukodystrophies (Pelizaeus-Merzbacher disease, Canavan disease, phenylketonuria) and schizophrenia.[6][7][8]