Granule cell
Not to be confused with granular cells in the kidney. 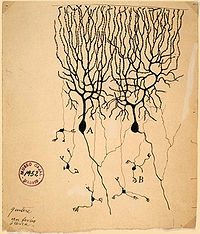 In neuroscience, granule cells refer to tiny neurons (a type of cell) that are around 10 micrometres in diameter. Granule cells are found within the granular layer of the cerebellum (which is also known as layer 3, the inner most layer of cerebellar cortex with the middle layer being the Purkinje cell layer and the outermost being the Molecular layer), the dentate gyrus of the hippocampus, the superficial layer of the dorsal cochlear nucleus, and in the olfactory bulb.

Cerebellar granule cells account for nearly half of the neurons in the central nervous system. Granule cells receive excitatory input from mossy fibers originating from pontine nuclei. Cerebellar granule cells send parallel fibers up through the Purkinje layer into the molecular layer where they branch out and spread through Purkinje cell dendritic arbors. These parallel fibers form thousands of excitatory Granule-cell-Purkinje-cell synapses onto the intermediate and distal dendrites of Purkinje cells using glutamate as a neurotransmitter.