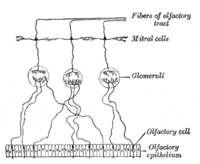 An olfactory receptor neuron (ORN), also called an olfactory sensory neuron (OSN), is a transduction cell within the olfactory system.[1]

ORs, which are located on the membranes of the cilia have been classified as a complex type of ligand-gated metabotropic channels.[3] There are approximately 1000 different genes that code for the ORs, making them the largest gene family. An odorant will dissolve into the mucus of the olfactory epithelium and then bind to an OR. ORs can bind to a variety of odor molecules, with varying affinities. The difference in affinities causes differences in activation patterns resulting in unique odorant profiles.[4] [5] The activated OR in turn activates the intracellular G-protein, GOLF (GNAL), adenylate cyclase and production of cyclic AMP (cAMP) opens ion channels in the cell membrane, resulting in an influx of sodium and calcium ions into the cell, and an efflux of chloride ions. This influx of positive ions and efflux of negative ions causes the neuron to depolarize, generating an action potential.

In insects, olfactory receptor neurons typically reside on the antenna. Much like in vertebrates, axons from the sensory neurons converge into glomeruli in the antennal lobe.