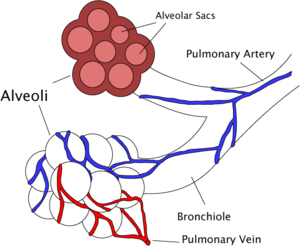 Diagram of the alveoli with both cross-section and external view

Pulmonary surfactant is a surface-active lipoprotein complex (phospholipoprotein) formed by type II alveolar cells. The proteins and lipids that surfactant comprises have both a hydrophilic region and a hydrophobic region. By adsorbing to the air-water interface of alveoli with the hydrophilic head groups in the water and the hydrophobic tails facing towards the air, the main lipid component of surfactant, dipalmitoylphosphatidylcholine (DPPC), reduces surface tension.

Alveoli can be compared to gas in water, as the alveoli are wet and surround a central air space. The surface tension acts at the air-water interface and tends to make the bubble smaller (by decreasing the surface area of the interface). The gas pressure (P) needed to keep equilibrium between the collapsing force of surface tension (γ) and the expanding force of gas in an alveolus of radius r is expressed by the law of Laplace:

Compliance is the ability of lungs and thorax to expand. Lung compliance is defined as the volume change per unit of pressure change across the lung. Measurements of lung volume obtained during the controlled inflation/deflation of a normal lung show that the volumes obtained during deflation exceed those during inflation, at a given pressure. This difference in inflation and deflation volumes at a given pressure is called hysteresis and is due to the air-water surface tension that occurs at the beginning of inflation. However, surfactant decreases the alveolar surface tension, as seen in cases of premature infants suffering from infant respiratory distress syndrome. The normal surface tension for water is 70 dyn/cm (70 mN/m) and in the lungs it is 25 dyn/cm (25 mN/m); however, at the end of the expiration, compressed surfactant phospholipid molecules decrease the surface tension to very low, near-zero levels. Pulmonary surfactant thus greatly reduces surface tension, increasing compliance allowing the lung to inflate much more easily, thereby eliminating the work of breathing. It reduces the pressure difference needed to allow the lung to inflate. The reduction in surface tension also reduces fluid accumulation in the alveolus as the surface tension draws fluid across the alveolar wall.

As the alveoli increase in size, the surfactant becomes more spread out over the surface of the liquid. This increases surface tension effectively slowing the rate of expansion of the alveoli. This also helps all alveoli in the lungs expand at the same rate, as one that expands more quickly will experience a large rise in surface tension slowing its rate of expansion. It also means the rate of shrinking is more regular, as if one reduces in size more quickly the surface tension will reduce more, so other alveoli can contract more easily than it can.

This is a phospholipid with two 16-carbon saturated chains and a phosphate group with quaternary amine group attached. The DPPC is the strongest surfactant molecule in the pulmonary surfactant mixture. It also has higher compaction capacity than the other phospholipids, because the apolar tail is less bent. Nevertheless, without the other substances of the pulmonary surfactant mixture, the DPPC's adsorption kinetics is very slow. This happens primarily because the phase transition temperature between gel to liquid crystal of pure DPPC is 41°C, which is higher than the human body's.

Phosphatidylcholine molecules form ~85% of the lipid in surfactant and have saturated acyl chains. Phosphatidylglycerol (PG) forms about 11% of the lipids in the surfactant, it has unsaturated fatty acid chains that fluidize the lipid monolayer at the interface. Neutral lipids and cholesterol are also present. The components for these lipids diffuse from the blood into type II alveolar cells where they are assembled and packaged for secretion into secretory organelles called lamellar bodies.

Proteins make up the remaining 10% of the surfactant. Half of this 10% is plasma proteins but the rest is formed by the apolipoproteins SP-A (SFTPA1), B (SFTPB), C (SFTPC) and D (SFTPD) (SP standing for "surfactant-associated protein"). The apolipoproteins are produced by the secretory pathway in type II cells. They undergo much post-translational modification, ending up in the lamellar bodies. These are concentric rings of lipid and protein, about 1 µm in diameter.

The SP proteins reduce the critical temperature of DPPC's phase transition to a value lower than 37°C,[2] what improves its adsorption and interface spreading velocity.[3][4] The compression of the interface causes a phase change of the surfactant molecules to liquid-gel or even gel-solid. The fast adsorption velocity is necessary to maintain the integrity of the gas exchange region of the lungs.

Each SP protein has distinct functions, which act synergetically to keep an interface rich in DPPC during lung's expansion and contraction. Changes in the surfactant mixture composition alter the pressure and temperature conditions for phase changes and the phospholipids' crystal shape as well.[5] Only the liquid phase can freely spread on the surface to form a monolayer. Nevertheless, it has been observed that if a lung region is abruptly expanded the floating crystals crack like "icebergs". Then the SP proteins selectively attract more DPPC to the interface than other phospholipids or cholesterol, whose surfactant properties are worse than DPPC's. The SP also fastens the DPPC on the interface to prevent the DPPC from being squeezed out when the surface area decreases [4] This also reduces the interface compressibility.[6] 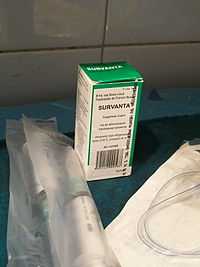 Survanta, surrounded by devices for its application.

Exosurf, Curosurf, Infasurf, and Survanta are the surfactants currently FDA approved for use in the U.S.[7]

Surface tension magnitude inside the lung

SP molecules contribute to increase the surfactant interface adsorption kinetics, when the concentration is below the saturation level. They also make weak bonds with the surfactant molecules at the interface and hold them longer there when the interface is compressed. Therefore, during ventilation, surface tension is usually lower than at equilibrium. Therefore the surface tension varies according to the volume of air in the lungs, which protects them from atelectasis at low volumes and tissue damage at high volume levels.[3][5][6]

Surfactant production in humans begins in Type II cells during the terminal sac stage of lung development. Lamellar bodies appear in the cytoplasm at about 20 weeks gestation. These lamellar bodies are secreted by exocytosis into the surface water layer lining the alveolar airspace, where the surfactant forms a meshwork of tubular myelin. Term infants are estimated to have an alveolar storage pool of approximately 100 mg/kg of surfactant, while preterm infants have an estimated 4–5 mg/kg at birth. This alveolar surfactant can be both broken down by macrophages and/or reabsorbed into the lamellar structures of type II cells. Up to 90% of surfactant phosphatidylcholine is recycled from the alveolar space in the newborn.

In late 1920s von Neergaard[8] identified the function of the pulmonary surfactant in increasing the compliance of the lungs by reducing surface tension. However the significance of his discovery was not understood by the scientific and medical community at that time. He also realized the importance of having low surface tension in lungs of newborn infants. Later, in the middle of the 1950s, Pattle and Clements rediscovered the importance of surfactant and low surface tension in the lungs. At the end of that decade it was discovered that the lack of surfactant caused infant respiratory distress syndrome (IRDS).[5]