Mount Sinai Hospital, New York
This article is about the hospital in New York. For the medical school, see Mount Sinai School of Medicine.

Located on the eastern border of Central Park, at 100th Street and Fifth Avenue, in New York City's Manhattan, Mount Sinai has a number of hospital affiliates in the New York metropolitan area, and an additional campus, the Mount Sinai Hospital of Queens.

The hospital is also affiliated with one of the foremost centers of medical education and biomedical research, Mount Sinai School of Medicine, which opened in September 1968.[2] Together, the two comprise the Mount Sinai Medical Center. 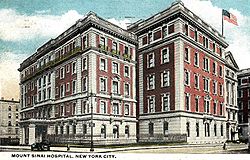 The hospital, from a postcard sent in 1920

As U.S. cities grew more crowded in the mid-19th Century, philanthropist Sampson Simson (b 1780, d 1857) founded a hospital to address the needs of New York's rapidly growing Jewish immigrant community. It was the second Jewish hospital in the United States.

The Jews' Hospital in the City of New York, as it was then called, was built on 28th Street in Manhattan, between 7th & 8th Avenues, on land donated by Simson; it opened two years before Simson's death. Four years later, it would be unexpectedly filled to capacity with soldiers from the Civil War.[13][14]

The Jews' Hospital felt the effects of the escalating Civil War in other ways, as staff doctors and board members were called in to service: Dr. Israel Moses served four years as Lieutenant Colonel in the 72nd;[15] Joseph Seligman had to resign as a member of the Board of Directors as he was increasingly called upon by President Lincoln for advice on the country's growing financial crisis.[16][17]

The Draft Riots of 1863 again strained the resources of the new hospital, as draft inequities and a shortage of qualified men increased racial tensions in New York City. As the Jews' Hospital struggled to tend to the many wounded, outside its walls over one hundred men, women and children were killed in the riots.[18]

More and more, the Jews' hospital was finding itself an integral part of the general community. In 1866, to reflect this new-found role, it changed its name. In 1872, the Hospital moved uptown to the east side of Lexington Avenue, between 66th and 67th Streets.

Now called The Mount Sinai Hospital, the institution forged relationships with many physicians who made contributions to medicine, including Henry N. Heineman, Frederick S. Mandelbaum, Charles A. Elsberg, Emanuel Libman, and, most significantly, Abraham Jacobi, known as the Father of American Pediatrics and a champion of construction at the hospital's new site on Manhattan's Upper East Side in 1904.[19]

The Hospital established a school of nursing in 1881. Created by Alma deLeon Hendricks and a small group of women, The Mount Sinai Hospital Training School for Nurses was taken over by the Hospital in 1895. In 1923 the name was changed to The Mount Sinai Hospital School of Nursing. This school closed in 1971 after graduating 4,700 nurses - all women except one man in the last class. An active alumnae association continues.

The early 20th century saw the population of New York City explode. That, coupled with many new discoveries at Mount Sinai (including significant advances in blood transfusions and the first endotracheal anesthesia apparatus), meant that Mount Sinai's pool of doctors and experts was in increasing demand. A $1.35 million expansion of the 1904 hospital site (equivalent to over 30 million in 2008 based on historical consumer price indexes)[20] raced to keep pace with demand. The opening of the new buildings was delayed by the advent of World War I. Mount Sinai responded to a request from the United States Army Medical Corps with the creation of Base Hospital No.3. This unit went to France in early 1918 and treated 9,127 patients with 172 deaths: 54 surgical and 118 medical, the latter due mainly to influenzal pneumonia.

Two decades later, with tensions in Europe escalating, a committee dedicated to finding placements for doctors fleeing Nazi Germany was founded in 1933. With the help of the National Committee for the Resettlement of Foreign Physicians, Mount Sinai Hospital became a new home for a large number of émigrés.

When war broke out, Mount Sinai was the first hospital to throw open its doors to Red Cross nurses' aides; the hospital trained thousands in its effort to reduce the nursing shortage in the States. Meanwhile, the President of the Medical Board, George Baehr, M.D. was called by President Roosevelt to serve as the nation's Chief Medical Director of the Office of Civilian Defense.[21]

These wartime roles would be eclipsed, however, when the men and women of Mount Sinai's Third General Hospital set sail for Casablanca, eventually setting up a 1,000 bed hospital in war-torn Tunisia. Before moving to tend to the needs of soldiers in Italy and France, the 3rd General Hospital had treated more than 5,000 wounded soldiers.[22]

Since the relative peace following World War II, Mount Sinai has welcomed the first graduating class of the Mount Sinai School of Medicine (in 1970); the 1980s saw a $500 million hospital expansion, including the construction of the Guggenheim Pavilion, the first medical facility designed by I.M. Pei; and it has made significant contributions to gene therapy, cardiology, immunotherapy, organ transplants, cancer treatments and minimally invasive surgery.