This page is about a medical school in New York. For other uses, please see: Mount Sinai (disambiguation)

Mount Sinai School of Medicine (MSSM) is an American medical school in the borough of Manhattan in New York City, currently ranked among the top 20 medical schools in the United States. It was chartered by Mount Sinai Hospital in 1963.

The first official proposal for the establishment of the medical school was made to the hospital's trustees in January 1958. Although almost half a century had passed since a medical school had been successfully created without the participation of a university, in 1963, a charter for the school was established.[14] The challenge of defining the new school's needs and refining its philosophy was met by, among other people, Hans Popper, Horace Hodes, Alexander Gutman, Paul Klemperer, George Baehr, Gustave L. Levy, and Alfred Stern.[14] Milton Steinbach was MSSM's first president.[14]

In 1968, MSSM commenced its first class of future physicians and quickly became one of the leading medical schools in the U.S., with Mount Sinai Hospital gaining international recognition for its laboratories as well as advances in patient care and the discovery of diseases.The City University of New York (CUNY) granted MSSM's degrees.[14]

In 1999, MSSM changed university affiliations from CUNY to New York University (NYU) but did not merge its operations with the New York University School of Medicine.[15] This affiliation change took place as part of the merger in 1998 of Mount Sinai and NYU medical centers to create the Mount Sinai-NYU Medical Center and Health System.[14] In 2007, Mount Sinai Medical Center's Boards of Trustees approved the termination of the academic affiliation between MSSM and NYU.[16] In 2010, MSSM was accredited by the Middle States Commission on Higher Education, and MSSM became an independent degree-granting institution without a university affiliation for the first time in its history.[17]

MSSM publishes the Mount Sinai Journal of Medicine: A Journal of Translational and Personalized Medicine six times a year. 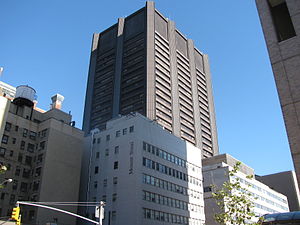 MSSM's medical curriculum is based on the standard division of medical education in the United States (U.S.): the former two years of study are confined to the medical sciences, the latter to the study of clinical sciences. The first and second years at MSSM are strictly pass/fail; the third and fourth years feature clinical rotations at Mount Sinai Hospital as well as affiliate hospitals – including Elmhurst Hospital Center, the Mount Sinai Hospital of Queens, and James J. Peters VA Medical Center in the Bronx.[18]

MSSM's quadruplet missions (quality education, patient care, research, and community service) follow the "commitment of serving science," and the majority of students take part in some aspect of community service. Notably, this participation includes The East Harlem Health Outreach Partnership (EHHOP), which was developed by the students of MSSM to create a health partnership between the East Harlem community and the MSSM, providing quality health care, regardless of ability to pay, to uninsured residents of East Harlem.

MSSM also features a unique early-admissions program, The Humanities and Medicine Program, which guarantees students admitted to that program a place in the medical school. These students, known colloquially as "HuMeds," apply during the fall of their sophomore year in college or university and do not take the Medical College Admission Test (MCAT). HuMeds make up about 25% of each year's MSSM medical class.

MSSM's student body is diverse, consisting of 17.9% underrepresented minorities (URM) and 53.6% women. The entering class of 2010 included 59 colleges, most heavily represented by Harvard, Yale, Columbia, Stanford, UPenn, Duke, Princeton, Brown, Cornell, and Dartmouth. One of the most selective medical schools in the United States, Mount Sinai boasts an average matriculating MCAT score of 35 and an average matriculating overall GPA of 3.7.[19]

Individual educational programs are accredited through the appropriate bodies, including but not limited to LCME, CEPH, ACCME and ACGME. All degree-granting programs are registered with the New York State Department of Education.