The main entrance to Manhattan College

Manhattan College is a Roman Catholic liberal arts college in the Lasallian tradition in New York City, United States. Despite the college's name, it is no longer located in Manhattan but in the Riverdale section of the Bronx, roughly 10 miles north of Midtown. Manhattan College offers undergraduate programs in the arts, business, education, engineering and science. Graduate programs are offered for education and engineering.

Manhattan College was founded as the Academy of the Holy Infancy in 1853 by five French Lasallian Brothers in a small building on Canal Street. When the need to expand forced them from Lower Manhattan, the College moved to 131st Street and Broadway, in the Manhattanville section of Harlem. Passengers on the uptown 1 line of the New York City Subway will find that there is a short section of above-ground track located near the college's original location. The school's name was changed to Manhattan College in 1863, and moved to its present location in the Riverdale section of The Bronx in 1922 as it outgrew its facilities in Manhattanville. This is often the cause of some confusion as the college is located outside of Manhattan but still within the city limits of New York City.

For 118 years, there existed on the Manhattan College campus a boys' secondary school, Manhattan College High School, familiarly known to students, parents, and rivals as Manhattan Prep. Founded in 1854, the school educated its young men in a Catholic college preparatory curriculum geared toward eventual university matriculation. It was, indeed, a "prep" school in the classic sense: coats and ties were mandatory for class attendance; strict standards of behavior were enforced; and daily newspaper reading was required. The curriculum included 3 years of Latin (with an optional 4th year); foreign language study, including Greek, French, and Spanish; 4 years of laboratory science, and 4 years each of theology, mathematics, English rhetoric and literary forms, history and social studies.

Throughout its existence, Manhattan Prep was very much a partner of its host institution with a significant percentage of its graduates continuing on to study at Manhattan College. The High School was located in De La Salle Hall. Students shared the college chapel, cafeteria, auditorium, and athletic facilities, and its sports teams bore the nickname, "the Jaspers" just as the Manhattan College teams. The "Prep" supported varsity teams in swimming, tennis, crew, cross country and indoor/outdoor track, and of course, basketball and baseball as members of the Catholic High School Athletic Association. There were also junior varsity and intramural sports. The school newspaper, published monthly, was called The Prepster.

After admitting a small class of 1972, Manhattan Prep closed its doors in 1971 due to rising costs and a decline in Lasallian Brothers' vocations. The members of the class of 1972 either accelerated to graduate in 3 years with the class of 1971 or left for other area Catholic High Schools. On June 4. 2011, forty years after its demise, a commemorative plaque was placed on De La Salle Hall in honor of Manhattan Prep.

Students are required to take college-wide general education requirements (such as math, college writing, religion and foreign language) as well as core requirements in their respective school, which varies by school. For example, the School of Arts maintains a core curriculum called The Roots of Modern Learning which includes courses such as "Classical Origins of Western Culture."

The College also offers graduate programs in Education, Engineering and Business. The graduate School of Engineering allows students studying engineering as an undergraduate the opportunity to continue on to get their Master's degree without having to switch colleges, as is the case at colleges with a 3 + 2 Engineering program. The B.S. Business / Masters of Business Administration Program offers students an option to complete a five-year multiple award program. The successful completion of the five-year program leads to two awards: a B.S. in Business (in one of six majors) and an MBA.

The Communication program and several other programs were entirely housed at the College of Mount Saint Vincent until 2008. At that time, a new, expanded Communication Department began offering courses on the Manhattan College campus. In the fall of 2008 this program was fully operational, with new, state-of-the-art broadcasting studios and computer labs, adding five new faculty members to create the present program housed in Leo Hall.

It once housed a public middle school, Jonas Bronck Academy, on the bottom floor of Hayden Hall, the primary residence of the Biochemistry, Chemistry and Physics departments, named after the noted philanthropist Charles Hayden. The middle school closed after the 2008-2009 school year. 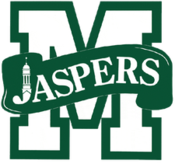 Manhattan College fields 19 Division-I athletic teams for men and women, including basketball, soccer, rugby, baseball and softball, tennis, lacrosse and volleyball. The school's men's sports teams are called the Jaspers; women are known as Lady Jaspers. Historically track and field has been the school's strongest sport.[2] Manhattan is a Member of the MAAC. h. The College annually played the New York Giants in the late 1880s and into the 1890s at the Polo Grounds and Manhattan is credited by the Baseball Hall of Fame with the practice of the "seventh inning stretch" spreading from there into major league baseball.[3] It is written in the Baseball Hall of Fame that "During one particularly warm and humid day when Manhattan College was playing a semi-pro baseball team called the Metropolitans, Brother Jasper noticed the Manhattan students were becoming restless and edgy as Manhattan came to bat in the seventh inning of a close game. To relieve the tension, Brother Jasper called time-out and told the students to stand up and stretch for a few minutes until the game resumed."On the college's 150th anniversary in 2003 at a New York Yankees game, Brother Jasper was credited with the Seventh-inning stretch.[citation needed]

Manhattan College had a football program from 1924 until 1942. The college team posted an all-time record of 194 wins, 198 losses, and 22 ties.[4] The final coach for the school's football team was Herbert M. Kopf. After the 1942 season, the school suspended intercollegiate football competition for World War II and then did not reactivate the program after completion of the war. The team was invited to the first ever Miami Palm Festival Game, predecessor to the Orange Bowl, played on January 2, 1933, University of Miami defeated Manhattan College 7–0.

Manhattan College's rowing program holds much history, as well. The school is one of the original 8 founding members of the Aberdeen Dad Vail Regatta, the largest Collegiate Regatta in the United States. The race attracts over one hundred Colleges and Universities from the U.S. and Canada and thousands of Student-Athletes on the second Saturday of May. The team's coach, Allen Walz along with the school's football coach at the time, Herbert M. Kopf served as Stewards to the regatta. In 1936 and 1938, Manhattan was one of two teams competing in the regatta, the other being Rutgers, on the Harlem River, where the team trains today. Both the men's and women's teams still compete in the Dad Vail Regatta today, as well as in the M.A.A.C. Championships, N.Y. State Championships, Knecht Cup and the C.R.A.S.H. B's World Indoor Rowing Championships.

Manhattan College occupies a relatively compact but architecturally arresting and various campus. The physical plant is divided into a North and a South campus. The North campus overlooks Van Cortlandt park, and has as its focal point "the Quad", which sits at the center of the campus four main buildings. Memorial Hall is the main entry onto campus and houses the office of the president as well as most of the other administrative offices on campus. Miguel Hall and De La Salle Hall are the main academic halls that border each side of the Quad. The fourth side of the Quad is bordered by the chapel building, which houses Smith Auditorium (used for receptions and various speakers and performances) on the first floor and the Chapel of De La Salle and His Brothers on the second floor, which features a painting of De La Salle and Brothers behind the altar, a large performing area where musical events and concerts take place on the altar, a grand piano and a pipe organ in the balcony.

Thomas Hall is the College's student life building. It houses the offices of the Dean of Students, the student government, the radio station, the newspaper, the TV station, the musical ensembles, and others. The college's three dining halls, Locke's Loft, Plato's Cave and Dante's Den, are also located in Thomas Hall.

The O'Malley Library is a relatively new, six-story structure that was joined with the previous library, the Cardinal Hayes Pavilion. Built on a hill, the new library was built directly next to and above the old one, essentially combining the two and creating more floors. The Office of Admissions is on the sixth floor of O'Malley.

Hayden Hall is on the east side of campus and houses the sciences as well as the department of fine arts.

On the South campus, across 240th street, is Leo Hall and the Research and Learning Center (RLC). The two are home to all of the engineering departments: electrical, computer, civil, chemical, mechanical, and environmental, along with the math and computer science departments and all communication classrooms, computer labs and broadcasting studios. Laboratories and classes for these disciplines take place in both buildings. Both biology and chemistry laboratories are also located in Leo. This building once contained a working nuclear reactor, which has since been decommissioned and stripped of its nuclear fuel and power generating capabilities in 1999. The Leo cafeteria, located in the basement, provides an alternative to trekking up to the main campus for breakfast and lunch.

Leo Hall is the home of the Communications Department's new television and audio studios and computer labs.

There are currently four on-campus residence halls at Manhattan. Jasper Hall and Chrysostom Hall are both traditional-style dorms, while Horan Hall (at 11 stories) is a suite-style building. In 1988, three floors were added to the wing of Jasper Hall raising it to six stories. Jasper 5th floor has the last original plaster-of-paris statue of the Virgin Mary and child. The famous naturalist and poet Harry V. Radford called Jasper 517 home. The newest hall, East Hill, was built in the style of Horan Hall. It opened in the fall of 2008. Overlook Manor, commonly known as "OV" is an off campus residence hall that offers apartment style living.

Draddy Gymnasium is the home of the basketball and volleyball teams, and also features the largest indoor track in New York City. Commencement exercises are held in Draddy. Gaelic Park, on 240th street, has recently been renovated with an artificial turf and is where soccer, lacrosse, and softball teams play. The college also heavily utilizes adjacent Van Cortlandt Park for baseball, outdoor track and field, golf, and cross country as well as intramural activities. Alumni Hall is the home of the college's workout facilities.

The Broadway Garage is the newly completed five floor parking garage located on Broadway. The garage offers parking to students, faculty and sporting events. The garage is also connected to Hayden hall via a pedestrian bridge that connects to one of Hayden's top floors, allowing pedestrians to bypass crossing Manhattan College Parkway. It is the newest addition to the college infrastructure.

The College is located between two major New York City roads, the Henry Hudson Parkway and the Major Deegan Expressway. The Van Cortlandt Park – 242nd Street subway station (1 train) provides access to Manhattan and the rest of the city. Travel time to midtown on the subway is roughly 30–40 minutes.