The College of Saint Benedict (CSB), for women, and Saint John's University (SJU), for men, are partnered liberal arts colleges respectively located in St. Joseph and Collegeville, Minnesota, USA. Students attend classes and activities together, and have access to the resources of both campuses. CSB/SJU are located about three and a half miles apart - the campuses are located on 3,200 acres (1,300 ha) of forests, prairies, and lakes.

Saint John's University has produced its own coarse-grained bread, Johnnie Bread, since 1856 and used the proceeds to fund projects such as the Abbey Church.[5]

CSB and SJU are two separate institutions that share a single academic program. Men and women attend classes together on both campuses. About 4,000 students are enrolled in CSB/SJU combined. They attend coed classes taught by a joint faculty of approximately 350 professors, mostly full-time, permanent appointees.

The Institute of International Education ranks CSB/SJU among the top baccalaureate institutions in the nation for the number of students who study abroad. Additionally, the colleges enroll approximately 250 students from 50 countries, and offer 200 undergraduate courses that have a global focus.

The Benedicta Arts Center of the College of Saint Benedict is a performing arts center on campus. The BAC presents three annual performances by the Minnesota Orchestra and has recently commissioned works by Diavolo and Merce Cunningham Dance Company. The Hill Museum and Manuscript Library at SJU is home to the Saint John's Bible (the first hand-scribed bible in 500 years) and a collection of religious sculpture, paintings, prints, and artifacts.[6] Saint John's University also includes Saint John's School of Theology Seminary, a graduate school which confers Master of Divinity and Master of Arts degrees. The school also prepares seminarians for the priesthood.

First-year dorms for the men of Saint John's University include Saint Thomas Aquinas Hall (Tommy Hall) and Saint Mary Hall. There are two men per dorm room in both of these buildings. Sophomore men at Saint John's live in three residence halls: St. Bernard (Bernie), St. Boniface (Bonnie), and St. Patrick (Pat). St. Boniface Hall and St. Patrick Hall are connected. Again, all three Sophomore halls have two men per dorm room. There are other housing options available for sophomores like St. Benet Hall which is attached to the Quadrangle Building (Quad). Also St. Joseph Hall (Joe Hall), St. Gregory House (Greg), and the Virgil Michel Apartments are an option. The first floor of Tommy is another common option for Sophomores to live. All of these are separate from the other three sophomore dorm halls. There are also housing options for juniors and seniors to live on campus, like on-campus apartments. These apartments include Placid House, Maur House, Saint Vincent Court, and Metten Court.[7]

CSB/SJU are members of the Minnesota Intercollegiate Athletic Conference (MIAC). Saint John's football team routinely finishes at or near the top of the conference, and their coach John Gagliardi has been with the program for 57 years. Gagliardi currently holds the record for winningest coach in college football history, regardless of division, with 478 wins. Saint John's has won six national team championships (2007, 2008 Golf Division III, 2003, 1976 Football Division III, 1965, 1963 Football NAIA). Saint John's biggest rival is the University of St. Thomas in St. Paul, Minnesota.

SJU made MIAC history in the fall of 2006 by winning team titles (or a share thereof) in all four fall sports: football, soccer, cross-country and golf (the golf team went on to finish first at the NCAA III championships in the spring).

The Nordic Ski teams at both schools were changed from intercollegiate to club teams in March of 2011 due to budget concerns.[9]

The rugby club recently celebrated its 40th anniversary in 2007 and continues to be a strong presence in Minnesota and the Midwest. The club has claimed the Minnesota Division II state championship from 2005-2009 and has made appearances in the Midwest Final Four the past three years.

The men's club lacrosse team competes within the Upper Midwest Lacrosse League (UMLL), a division of the Men's Collegiate Lacrosse Association (MCLA). The team won the 2004, 2005, 2007, 2008 and 2011 UMLL Championship. The team has also appeared in the MCLA National Championship Tournament from 2006-2011, playing in the National Championship game in 2006 and 2007 (runners up both years).

The women's club lacrosse team has also made appearances on the national lacrosse scene. The CSB Lacrosse appeared at the inaugural 2010 WDIA National Championships for D2 club lacrosse in Scottsdale, Arizona; After coming in second place in the North Central Women's Lacrosse League. 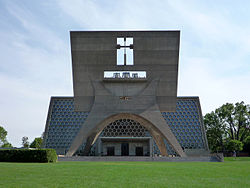 Saint John's Abbey Church on the campus of SJU

The Saint John's Senate (SJS) is the elected student government at Saint John's University. The Saint Ben's Senate (SBS) is the elected student government at the College of Saint Benedict. The Senates, while individually governering in the interest of their own student body, work closely together with students, faculty, staff, and university administrators to enhance all aspects of student life. 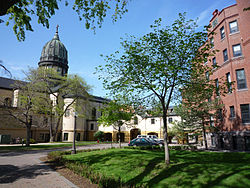 The music department at the College of Saint Benedict and Saint John's University is quite expansive considering the size of the school. The department of music has many ensembles including four choirs, an orchestra, a wind ensemble, a jazz ensemble, and several small chamber ensembles. Many of these ensembles tour extensively both domestically and abroad. The department also presents an opera every year and recently performed a Stephen Paulus oratorio about the Holocaust entitled "To Be Certain of the Dawn", jointly with choirs and orchestra from Saint Cloud State University in Europe in May 2008. There are also several student run groups, including the a cappella group Johnnie Blend. Over half of the students at the College of Saint Benedict and Saint John's University participate in some kind of music ensemble.

All student media is run independent of the CSB/SJU administration. 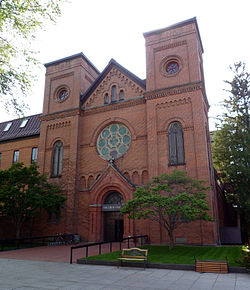 The Great Hall, on the campus of SJU; it served as the abbey church until the construction of current present church.

The official SJU newspaper since 1888, The Record became the official newspaper of CSB in 2000. The newspaper is published weekly during the fall and spring semesters and has been recognized among the best weekly college newspapers in Minnesota and the U.S. All back issues of CSB newspapers are available for full-text searching and viewing online through Vivarium, the CSB/SJU Digital Image Collection.

The official student radio station of CSB/SJU allows students to host talk and music-oriented shows in one-hour segments. When KJNB first started out in 1954, it was located in the basement of Mary Hall (where Bat Cave is supposedly right now). When Bat Cave moved in, there are rumors that KJNB supposedly moved to somewhere in the basement of Steven B. Humphrey theater. Around 2001, the studio was moved to its current location. The studio is located in the lower level of Guild Hall (also called the Old Gym and Rat Hall) in the center of campus. The location now (the basement) used to be Rat Hall, filled with dormitories that housed the ROTC students. The once-occupied dorm rooms were converted into what are now the offices and the studio itself. Broadcasts are streamed over the Internet and are broadcast on closed-circuit campus TV Channel 6 and in a few public locations across both campuses. The official broadcasting signal was purchased by a local commercial radio station (possibly Clear Channel), so it could expand its service area, though efforts are underway to regain the signal again someday. KJNB does not advertise (as it is a non-commercial station) and dead air is filled with randomly cycled music.