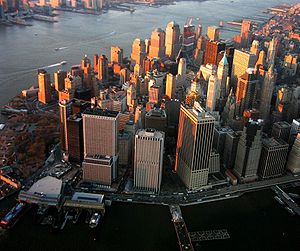 Lower Manhattan is the southernmost part of the island of Manhattan, the main island and center of business and government of the City of New York. Lower Manhattan or "downtown" is defined most commonly as the area delineated on the north by 14th Street, on the west by the Hudson River, on the east by the East River, and on the south by New York Harbor (also known as Upper New York Bay). When referring specifically to the lower Manhattan business district and its immediate environs, the northern border is commonly designated by thoroughfares approximately a mile-and-a-half south of 14th Street and a mile north of the island's southern tip: Chambers Street from near the Hudson east to the Brooklyn Bridge entrances and overpass. Two other major arteries are also sometimes identified as the northern border of "lower" or "downtown Manhattan": Canal Street, roughly half a mile north of Chambers Street, and 23rd Street, roughly half a mile north of 14th Street. Anchored by Wall Street, in Lower Manhattan, New York City is the financial capital of the world[1][2][3][4][5][6][7] and is home to the New York Stock Exchange, the world's largest stock exchange by market capitalization of its listed companies. 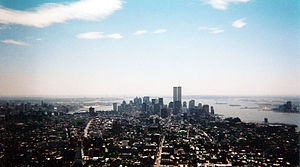 The Lower Manhattan skyline in May 2001, seen from the Empire State Building. The World Trade Center can be seen in the background, four months before it was destroyed.

The lower Manhattan business district forms the core of the area below Chambers Street. It includes the Financial District (often referred to as Wall Street, after its primary artery) and the former site of the World Trade Center. At the island's southern tip is Battery Park; City Hall is just to the north of the Financial District. Also south of Chambers Street are the planned community of Battery Park City and the South Street Seaport historic area. The neighborhood of TriBeCa straddles Chambers on the west side; at the street's east end is the giant Manhattan Municipal Building. North of Chambers Street and the Brooklyn Bridge and south of Canal Street lies most of New York's oldest Chinatown neighborhood. Many court buildings and other government offices are also located in this area. The Lower East Side neighborhood straddles Canal. North of Canal and south of 14th Street are the neighborhoods of SoHo, the Meatpacking District, the West Village, Greenwich Village, Little Italy, Nolita, and the East Village. Between 14th and 23rd streets are lower Chelsea, Union Square, the Flatiron District, Gramercy, and the large residential development Peter Cooper Village—Stuyvesant Town. 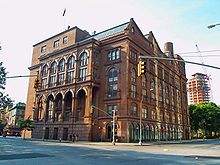 The Cooper Union at Astor Place, where Abraham Lincoln gave his famed Cooper Union speech, is one of downtown's most storied buildings. 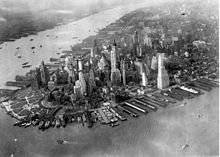 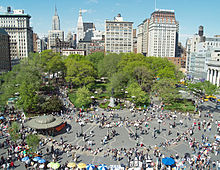 The Dutch established the first European settlements in Manhattan, which were located at the lower end of the island.[8] The first fort was built at the Battery to protect New Netherland. In 1771, Bear Market was established along the Hudson shore on land donated by Trinity Church, and replaced by Washington Market in 1813.[9] Washington Market was located between Barclay and Hubert Streets, and from Greenwich to West Street.[10] The area remains one of the few parts of Manhattan where the street grid system is largely irregular. Throughout the early decades of the 1900s, the area experienced a construction boom, with major towers such as 40 Wall Street, the American International Building, Woolworth Building, and 20 Exchange Place being erected.

In the 1950s, a few new buildings were constructed in lower Manhattan, including an 11-story building at 156 William Street in 1955.[11] A 27-story office building at 20 Broad Street, a 12-story building at 80 Pine Street, a 26-story building at 123 William Street, and a few others were built in 1957.[11] By the end of the decade, lower Manhattan had become economically depressed, in comparison with midtown Manhattan, which was booming. David Rockefeller spearheaded widespread urban renewal efforts in lower Manhattan, beginning with construction One Chase Manhattan Plaza, the new headquarters for his bank. He established the Downtown-Lower Manhattan Association (DLMA) which drew up plans for broader revitalization of lower Manhattan, with the development of a world trade center at the heart of these plans. The original DLMA plans called for the "world trade center" to be built along the East River, between Old Slip and Fulton Street. After negotiations with New Jersey Governor Richard J. Hughes, the Port Authority decided to build the World Trade Center on a site along the Hudson River and the West Side Highway, rather than the East River site.[citation needed]

Through much of its history, the area south of Chambers Street was mainly a commercial district, with a small population of residents—in 1960, it was home to about 4,000.[12] Construction of Battery Park City, on landfill from construction of the World Trade Center, brought many new residents to the area. Gateway Plaza, the first Battery Park City development, was finished in 1983. The project's centerpiece, the World Financial Center, consists of four luxury highrise towers. By the turn of the century, Battery Park City was mostly completed, with the exception of some ongoing construction on West Street. Around this time, lower Manhattan reached its highest population of business tenants and full-time residents.[citation needed]

Since the early twentieth century, lower Manhattan has been an important center for the arts and leisure activities. Greenwich Village was a locus of bohemian culture from the first decade of the century through the 1980s. Several of the city's leading jazz clubs are still located in Greenwich Village, which was also one of the primary bases of the American folk music revival of the 1960s. Many art galleries were located in SoHo between the 1970s and early 1990s; today, the downtown Manhattan gallery scene is centered in Chelsea. From the 1960s onward, lower Manhattan has been home to many alternative theater companies, constituting the heart of the Off-Off-Broadway community. Punk rock and its derivatives emerged in the mid-1970s largely at two venues: CBGB on the Bowery, the western edge of the East Village, and Max's Kansas City on Park Avenue South. At the same time, the area's surfeit of reappropriated industrial lofts played an integral role in the development and sustenance of the minimalist composition, free jazz, and disco/electronic dance music subcultures. The area's many nightclubs and bars—though mostly shorn of the freewheeling iconoclasm, pioneering spirit, and do-it-yourself mentality that characterized the pregentrification era—still draw patrons from throughout the city and the surrounding region. In the early twenty-first century, the Meatpacking District, once the sparsely populated province of after-hours BDSM clubs and transgendered prostitutes, gained a reputation as New York's trendiest neighborhood.[13]

Among the commercial districts of Lower Manhattan was the now vanished Radio Row, which was located on Cortlandt Street at what became the site of the World Trade Center. 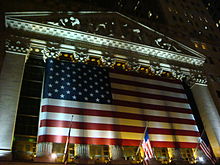 The area contains many old and historic building and sites, including Castle Garden, originally the fort Castle Clinton, Bowling Green, the old United States Customs House, now the National Museum of the American Indian, Federal Hall, where George Washington was inaugurated as the first U.S. President, Fraunces Tavern, New York City Hall, the New York Stock Exchange, renovated original mercantile buildings of the South Street Seaport (and a modern tourist building), the Brooklyn Bridge, South Ferry, embarkation point for the Staten Island Ferry and ferries to Liberty Island and Ellis Island, and Trinity Church. Lower Manhattan is home to some of New York City's most spectacular skyscrapers, including the Woolworth Building, 40 Wall Street (also known as the Trump Building), the Standard Oil Building at 26 Broadway, and the American International Building.

After the terrorist attacks of September 11, 2001, Lower Manhattan lost much of its economy and office space. While the area's economy has rebounded significantly, as of April 2010, the enormous site once occupied by the World Trade Center remains under construction. The Lower Manhattan Development Corporation plans to rebuild downtown Manhattan, by adding new streets, buildings, and office space.

The pre-9/11 Lower Manhattan skyline, from the Staten Island Ferry in December 1991. 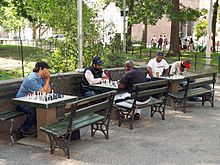 Downtown in the context of Manhattan, and of New York City generally, has different meanings to different people, especially depending on where in the city they reside. Residents of the island or of The Bronx generally speak of going "downtown" to refer to any southbound excursion to any Manhattan destination.[14] A declaration that one is going to be "downtown" may indicate a plan to be anywhere south of 14th Street—the definition of downtown according to the city's official tourism marketing organization[14]—or even 23rd Street.[15] The full phrase downtown Manhattan may also refer more specifically to the area of Manhattan south of Canal Street.[12] Within business-related contexts, many people use the term downtown Manhattan to refer only to the Financial District and the corporate offices in the immediate vicinity. For instance, the Business Improvement District managed by the Alliance for Downtown New York defines Downtown as South of Murray Street (essentially South of New York City Hall), which includes the World Trade Center area and the Financial District. The phrase lower Manhattan may apply to any of these definitions: the broader ones often if the speaker is discussing the area in relation to the rest of the city; more restrictive ones, again, if the focus is on business matters or on the early colonial and post-colonial history of the island.[citation needed]

As reflected in popular culture, "downtown" in Manhattan has historically represented a place where one could "forget all your troubles, forget all your cares, and go Downtown," as the lyrics of Petula Clark's 1964 hit "Downtown" celebrate. The protagonist of Billy Joel's 1983 hit "Uptown Girl" contrasts himself (a "downtown man") with the purportedly staid uptown world.[16] Likewise, the chorus of Neil Young's 1995 single "Downtown" urges "Let's have a party, downtown all right."

The city hall and related government infrastructure of the City Of New York are located in Lower Manhattan, next to City Hall Park.

Lower Manhattan is the fourth largest business district in the United States, after Midtown Manhattan, the Chicago Loop, and Washington, D.C., and will regain the title of 3rd after the completion of 1 World Trade Center, also known as Freedom Tower, and the three other skyscrapers at the site.[18]

55 Water Street houses the headquarters of EmblemHealth and Standard & Poor's.[19][20] HIP Health Plan of New York, which became a part of EmblemHealth, moved there with 2,000 employees in October 2004. It was the largest corporate relocation in downtown Manhattan following the September 11 attacks.[21]