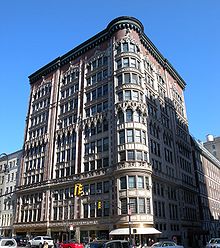 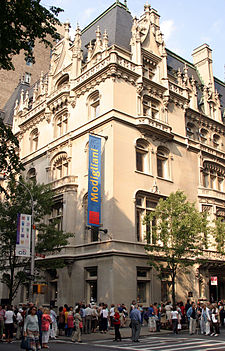 The Jewish Museum in New York on 5th Ave at 92nd St. The Museum Mile Festival.

Once known as the 'Silk Stocking District',[2] it retains its position as one of the most affluent neighborhoods of New York City.

Before the arrival of Europeans, the mouths of streams[3] that eroded gullies in the East River bluffs are conjectured to have been the sites of fishing camps used by the Lenape, whose controlled burns once a generation or so kept the dense canopy of oak-hickory forest open at ground level.[4]

In the 19th century[5] the farmland and market garden district of what was to be the Upper East Side was still traversed by the Boston Post Road and, from 1837, the New York and Harlem Railroad, which brought straggling commercial development around its one station in the neighborhood, at 86th Street, which became the heart of German Yorkville. The area was defined by the attractions of the bluff overlooking the East River, which ran without interruption from James William Beekman's "Mount Pleasant", north of the marshy squalor of Turtle Bay, to Gracie Mansion, north of which the land sloped steeply to the wetlands that separated this area from the suburban village of Harlem.[6] Among the series of villas a Schermerhorn country house overlooked the river at the foot of present-day 73rd Street and another, Peter Schermerhorn's at 66th Street,[7] and the Riker homestead was similarly sited at the foot of 75th Street.[8] By the mid-19th century the farmland had largely been subdivided, with the exception of the 150 acres (0.61 km2) of Jones's Wood, stretching from 66th to 76th Streets and from the Old Post Road (Third Avenue) to the river[9] and the farmland inherited by James Lenox, who divided it into blocks of houselots in the 1870s,[10] built his Lenox Library on a Fifth Avenue lot at the farm's south-west corner,[11] and donated a full square block for the Presbyterian Hospital, between 70th and 71st Streets, and Madison and Park Avenues.[12] At that time, along the Boston Post Road taverns stood at the mile-markers, Five-Mile House at 72nd Street and Six-Mile House at 97th, a New Yorker recalled in 1893.[8]

The fashionable future of the narrow strip between Central Park and the railroad cut was established at the outset by the nature of its entrance, in the southwest corner, north of the Vanderbilt family's favored stretch of Fifth Avenue in the 50s.[13] A row of handsome townhouses was built on speculation by Mary Mason Jones, who owned the entire block bounded by 57th and 58th Streets and Fifth and Madison; in 1870 she occupied the prominent corner house at 57th and Fifth, though not in the isolation described by her niece, Edith Wharton:

"It was her habit to sit in a window of her sitting room on the ground floor, as if watching calmly for life and fashion to flow northward to her solitary door... She was sure that presently the quarries, the wooden greenhouses in ragged gardens, the rocks from which goats surveyed the scene, would vanish before the advance of residences as stately as her own."[14]

Wharton's picture has been uncritically accepted as history, Christopher Gray has pointed out.[15] 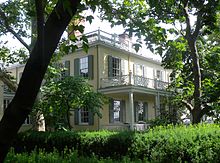 Before the Park Avenue railroad cut was covered (finished in 1910), fashionable New Yorkers shunned the smoky railroad trench up Fourth Avenue (now Park Avenue), to build stylish mansions and townhouses on the large lots along Fifth Avenue, facing Central Park, and on the adjacent side streets. The latest arrivals were the rich Pittsburghers Andrew Carnegie and Henry Clay Frick. The classic phase of Gilded Age Fifth Avenue as a stretch of private mansions was not long-lasting: the first apartment house to replace a private mansion on upper Fifth Avenue was 907 Fifth Avenue (1916), at 72nd Street, the neighborhood's grand carriage entrance to Central Park.[16]

Most members of New York's upper-class families have made residences on the Upper East Side, including the oil-rich Rockefellers,[17] political Roosevelts,[18] political dynastic Kennedys, [19][20] thoroughbred racing moneyed Whitneys,[21][22] and tobacco and electric power fortuned Dukes.[23]

Construction of the 3rd Avenue El, opened from 1878 in sections, followed by the 2nd Avenue El, opened in 1880, linked the Upper East Side's middle class and skilled artisans closely to the heart of the city, and confirmed the modest nature of the area to their east. The ghostly "Hamilton Square", which had appeared as one of the few genteel interruptions of the grid plan on city maps since the Commissioners' Plan of 1811, was intended to straddle what had now become the Harlem Railroad right-of-way between 66th and 69th Streets; it never materialized, though during the Panic of 1857 its unleveled ground was the scene of an open-air mass meeting called in July to agitate for the secession of the city and its neighboring counties from New York State, and the city divided its acreage into house lots and sold them.[24] From the 1880s Yorkville, as it was known, extended eastwards toward the river and westwards past Lexington Avenue; Yorkville became a suburb of middle-class Germans, many of whom worked in nearby piano factories, stables, and breweries.

Gracie Mansion, the last remaining suburban villa overlooking the East River, became the home of New York's mayor in 1942. The East River Drive, designed by Robert Moses, was extended southwards from the first section, from 125th Street to 92nd Street, which was completed in 1934 as a boulevard, an arterial highway running at street level; reconstruction designs from 1948 to 1966 converted FDR Drive, as it was renamed after Franklin Delano Roosevelt, into the full limited-access parkway that is in use today.

Demolishing the els on Third and Second opened the avenues of tenements to the spotty construction of high-rise apartment blocks from the 1950s.

The Metropolitan Museum of Art (left) at 5th Ave and 82nd St.

Many realtors used the term "Upper East Side" instead of "East Harlem" to define areas that are north of 96th street such as on 5th ave or areas close by such as 97th street to avoid the negative connotation since people associate the latter with being a less prestigious neighborhood.[26] However, zip codes 10029 and the elected officials that represent East Harlem never cross 96th street and they do not refer to their neighborhoods as being part of the Upper East Side. On the other hand, according the NY Department of Buildings, Upper East Side actually extends from 97th St. up to 110th St. if you are residing in the areas between Central Park 5th Avenue and Madison Avenue. [27]

Given its very high population density and per capita income ($85,081 in 2000), the neighborhood is believed to contain the greatest concentration of individual wealth in the world.[citation needed] As of 2000, 75.6% of adults (25+) had attained a bachelor's degree or higher.

The Upper East Side is also notable as a significant location of political fundraising in the United States. Four of the top five ZIP codes in the nation for political contributions are in Manhattan. The top ZIP Code, 10021, is on the Upper East Side and generated the most money for the 2004 presidential campaigns of both George W. Bush and John Kerry.[31] 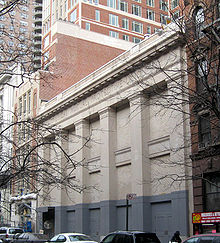 Missions to the United Nations in the Upper East Side include:[36]

The only public housing projects for those of low to moderate incomes on the Upper East Side are located just below the neighborhood's northern limit at 96th Street, the Holmes Towers and Isaacs Houses.

The Upper East Side is currently served by one subway line, the four-track IRT Lexington Avenue Line (4 5 6 <6> trains), and local bus routes. Due to severe congestion on the subway and buses, the Metropolitan Transportation Authority is currently building a new subway line, the Second Avenue Subway, along Second Avenue. The first phase will run from 96th Street to 63rd Street, where it will physically connect with the BMT Broadway Line; service will be provided by a northern extension of the Q train. In later phases, the line will be extended north to 125th Street/Park Avenue in Harlem and south to Hanover Square in the Financial District, and a new T train will run its entire length. 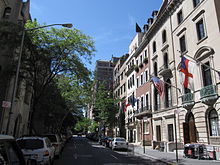 The area is host to some of the most famous museums in the world. The string of museums along Fifth Avenue fronting Central Park has been dubbed "Museum Mile." It was once named "Millionaire's Row." Among the cultural institutions on the Upper East Side: 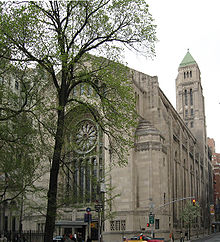 The Upper East Side has been a setting for many movies, television shows, and many other media due to its world-class museums, expensive restaurants and boutiques, proximity to Central Park, elite schools, and influential residents.

The neighborhood has a long tradition of being home to some of the world's most wealthy, powerful and influential families and individuals. Some of the notable people who have lived here include: