The Spence School is an American all-girls independent school in New York City, founded in 1892 by Clara B. Spence.[1]

Spence has about 688 students, with K-4 representing the Lower School, 5-8 representing the Middle School, and 9-12 representing the Upper School. Lower school average class sizes are 16-18 and middle and upper school averaging 13-14. The student: teacher ratio is 7:1 and students of color in all grades make up approximately 17 percent of the student body.[2] The school is popular with elite families in New York City.[3] The tuition is approximately $37,000. Its sister schools are the all-girls Brearley School, the all-girls Chapin School and the all-boys Collegiate School, all in New York City. Forbes magazine ranked Spence ninth on its 2010 list of the best prep schools in America.[4]

The Spence School was founded in 1892 by Clara B. Spence, who was its head for 31 years. The school was once boarding, and its motto is "non scholae sed vitae discimus" (Latin for "Not for school, but for life we learn"). The first building was located on New York City's West 48th Street.[5]

Clara B. Spence described her school as: "A place not of mechanical instruction, but a school of character where the common requisites for all have been human feeling, a sense of humor and the spirit of intellectual and moral adventure."

The Carnegie family donated their tennis court to be used as a playground for Spence. When the school wanted to expand and build on the lot in the 1990s, they built a new playground on the roof of the new building to meet the stipulations of the gift. The school has been located on East 91st Street since 1929.[6]

Spence offers a liberal arts and science curriculum, including programs in the arts and foreign languages. Computers are integrated into the curriculum in the Kindergarten class and continue through the twelfth grade. In addition, English courses include Asian, African, African American, Latin American, and Middle Eastern Literature. In the Upper School most students, even though not required, take four years of math and science. Beginning in 2007-08, Mandarin Chinese was added to the teaching of French, Spanish and Latin. Foreign language requirements begin in the third grade with either French, Spanish, or Chinese and in the seventh grade both Latin and Mandarin Chinese become electives as the students continue their study of foreign language. A specialized computer/robotics course also becomes an elective in the seventh grade.

In a Worth magazine study, out of the 31,700 private and public high schools in the United States, Spence ranked the sixth most successful school in the country in placing its graduates in Harvard, Yale and Princeton.[7]

The chess team in April 2008 finished first in the National All-Girls Chess Championship in Dallas, Texas.

The Grade 6 chess team won 7th place in the U.S. Chess Federation National K-12 Championship during the 2008-2009 school year. to the Page

The Middle School Swim Team has won the AAIS Championships 9 out fo the last 10 years.. 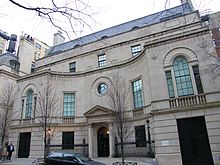 The Spence School campus is currently located in three buildings in the Carnegie Hill Historic District on the Upper East Side of Manhattan. The Upper School (9-12) and Middle School (5-8) are housed a half block from Central Park/5th Avenue at 20 East 91st Street, next to the Cooper-Hewitt Museum. The Lower School (K-4) is housed in the renovated landmark building William Goadby Loew House on East 93rd Street between Park Avenue and Madison Avenue. On April 28, 2008, the Spence School announced the acquisition of a third building through the purchase of the Wanamaker Munn townhouse at 17 East 90th Street, directly behind the Upper and Middle School facility. The new townhouse is connected to the main 91st Street building, and construction will be completed during the 2011-2012 academic year, with much of the new facility already being used for various academic programs. On September 16, 2011, the Spence School announced the purchase of a fourth building, a very large space located at 412 East 90th Street, that will become a state of the art physical education facility (with multiple gyms, courts and fields) within the next several years.

Spence in film and television

The main building of the Spence School (the Upper and Middle School) is on East 91st Street, one half block from 5th Avenue/Central Park, adjacent to the Cooper-Hewitt Museum (originally the Andrew Carnegie mansion), and across the street from the Consulate General of Russia. The location (5th Avenue and 91st Street) has been used as a backdrop in several movies and television shows including