Founded by Maria Bowen Chapin, the Chapin School originally opened in 1901, at 12 West 47th Street as "Miss Chapin's School for Girls and Kindergarten for Boys and Girls" with an enrollment of 78 students and seven teachers.[2] Following a move to East 58th Street in 1905 and a later move to East 57th Street in 1910, the school relocated, in 1928, from Midtown Manhattan to its present location on Manhattan's Upper East Side at 100 East End Avenue at East 84th Street.

Through Chapin's liberal-arts curriculum, students are instructed and supported by a dedicated faculty. Class sizes are small in each of the three divisions: Lower School (kindergarten through grade 3), Middle School (grades 4 through 7), and Upper School (grades 8 through 12). The school is a member of the New York Interschool Association. Annual tuition per student is $35,100.[4] The school does not have the usual two sets of exams; instead, one set is given to eighth through twelfth graders before the spring recess. 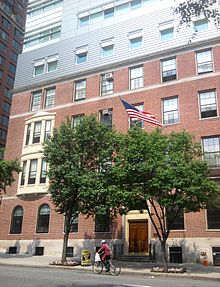 The school's motto, Fortiter et Recte (Bravely and Rightly), shows Miss Chapin's determination to get women to speak up, just as she did in her suffragette days.

The school's emblem, a wheel, is modeled after the wheel that was meant to kill Saint Catherine of Alexandria, but miraculously fell apart. The wheel is claimed to symbolize a Chapin student's spirit of endurance and moral fortitude. The students leave assembly in a wheel pattern.

Chapin has a longstanding tradition of green/gold field day. Every year, all the fourth graders and new students fifth grade and above are placed on either the green or the gold team. This is done at a special assembly, in which all of the new team members are given either a green or gold ribbon. Since descendants of many former students attend the school, a girl is assigned to the same team as her relative. For example, if a girl's grandmother was a "green", the girl will be a "green" also. Throughout the school year, the girls compete in green versus gold games. The rivalry between the two teams is fierce, and most students choose to dress in their team colors, with some going as far as to dye their hair and use face paint during the most competitive day, field day. At the end of the year the final team winner is announced and a banner with the winning team's name on it is hung in the gymnasium.

Because of growth in its student body the school expanded the fifth and sixth floors and added a seventh and eighth floor. The addition, completed in 2008, provides new facilities for art, language, science and a greenhouse.

Chapin ranked 14th at sending students to Harvard University, Yale University and Princeton University .[5] In late 2007, the school placed third[6] (in a list limiting the scope to schools that had senior classes of at least 50) in a ranking in The Wall Street Journal of college placement at a sampling of universities and liberal arts colleges.