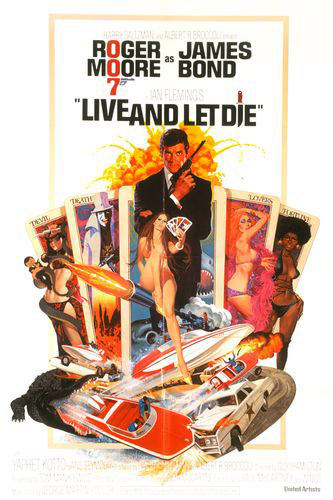 "Live and Let Die" is the eighth of the British series and the first to star as the fictional British secret agent James Bond. The film was produced in 1973 by and . Despite wanting to return after his role in the previous Bond film "Diamonds Are Forever", Connery declined which sparked a search for a new actor which lead to British actor Roger Moore selected for the lead role.

The film is adapted from the novel of the same name by . In the film, a drug lord known as Mr. Big plans to distribute two tons of free so as to put rival drug barons out of business. Bond is investigating the death of three British agents which leads him to Big and is soon trapped in a world of gangsters and voodoo as he fights to put a stop to Mr. Big's scheme.

"Live and Let Die" was released during the height of the blaxploitation era, and many blaxploitation s and cliché are depicted such as hairstyles, derogatory racial epithets (""), black gangsters, and "s." It departs from the former plots of the James Bond films about c supervillains, and instead focuses on , depicted primarily in blaxploitation films. Moreover, it is set in cultural centres such as , , and the . It was also the first James Bond film featuring an African American to be romantically involved with , who was played by .

Three British agents, including one "on loan" to the American government, are killed under mysterious circumstances within 24 hours while monitoring the operations of Dr. Kananga, the of a small Caribbean island called San Monique. James Bond is sent to , where the first agent was killed and where Kananga is currently visiting the UN, to investigate. As soon as Bond arrives in New York City, his driver is killed while taking him to meet of the CIA and Bond is nearly killed in the ensuing car crash.The driver's killer leads Bond to Mr. Big, a gangster who runs a chain of "Fillet of Soul" s throughout the . It is during his confrontation with Mr. Big that Bond first meets Solitaire, a beautiful expert who has the uncanny ability to see both the future and remote events in the present. In disguise as Mr. Big, Kananga demands that his henchman kill Bond, who manages to escape unscathed. Bond follows Kananga back to San Monique, where he subsequently meets Rosie Carver, a CIA , who is subsequently murdered on the island by Kanaga's scarecrow men after Bond suspects her of working for Kananga. Later he meets the boatman Quarrel, Jr. who takes him to Solitaire's home. Using a stacked deck of only cards showing "The Lovers", Bond tricks her into thinking that seduction is in her future and then seduces her. Solitaire loses her ability to foretell the future when she loses her to Bond and is forced into cooperating with Bond to bring down Kananga.

It transpires that Kananga is producing two metric tons of heroin and is protecting the fields by exploiting locals' fear of and the . Through his alter ego, Mr. Big, Kananga plans to distribute the heroin free of charge on the market, which will drive all the other drug cartels out of business, increase the number of addicts, and give Kananga a monopoly of the heroin market. Kananga's men capture Bond and Solitaire at the New Orleans airport. Bond does not identify Mr. Big, as the latter is wearing a plastic gangster mask. Kananga rips off his mask and asks a disgusted Bond if he slept with Solitaire, using Bond to test her abilities. Kananga turns Solitaire over to Baron Samedi to be sacrificed after he discovers that her ability to read the tarot is gone. Kananga leaves Bond with his henchman, Tee Hee Johnson, who takes Bond to a farm community in the Louisiana backwoods. Bond escapes being eaten by the crocodiles by running along the animals' backs to safety. He sets the farm on fire and steals a speedboat, engaging in a chase with Kananga's men, local sheriff and the Louisiana state police. Later, back in San Monique, Bond interrupts the voodoo sacrifice and saves Solitaire. Bond and Solitaire escape below ground into Kananga's lair. Kananga captures them both and proceeds to lower them into a shark tank. Bond escapes and forces a shark gun pellet in Kananga's mouth, causing him to literally blow up like a balloon, float to the top of the cave, and explode. After the job is done, Felix leaves Bond and Solitaire on a train out of the country.

Tee Hee makes a last attempt on Bond's life and is ejected from their train compartment at high speed. Samedi is seen perched on the front of the speeding train in which Bond and Solitaire are travelling, in his voodoo outfit and laughing mysteriously.

* as James Bond: A British agent who is sent on a mission to investigate the murder of three fellow agents. This mission leads him to Mr. Big and his sunsequent drug ring.
* as Dr. Kananga and Mr. Big: A corrupt Caribbean Prime Minister who doubles as a drug lord.
* as M: Head of the "OO" section of MI6.
* as : M's secretary of whom has feelings for Bond.
* as : Bond's CIA colleague. Leiter is also investigating Mr. Big.
*Jane Seymour as Solitaire: Kananga's girlfriend and the love interest of Bond.
* as Sheriff J.W. Pepper: A local Louisiana sheriff.
* as Tee Hee Johnson: Kananga's primary henchman who has a pincer for hand.
* as Baron Samedi: Kananga's henchman who has ties to the Voodoo occult.
* as Rosie Carver: A traitorous young CIA agent in San Monique.
* as Quarrel Jr.: Bond's ally in San Monique and son of Quarrel from "Dr. No".
* as Miss Caruso: An Italian agent whom Bond romances.
* as Whisper: Kananga's henchman who only whispers.

"Live and Let Die" was chosen as the next Ian Fleming novel to be adapted because screenwriter thought it would be daring to use black villains at the period, which had the Black Panthers and other racial movements.

While searching for locations in Jamaica, the crew discovered a crocodile farm owned by Ross Kananga, after passing a sign warning that "trespassers will be eaten." The farm was put into the script and also inspired Mankiewicz to baptize the film's villain after Kananga.

Broccoli and Saltzman tried to convince Sean Connery to return as 007, but he declined. Many other actors wereauditioned or considered for Bond most notably (later the villain in the 1981 Bond film "For Your Eyes Only"), ,

Mankiewicz had thought of turning Solitaire into a black woman, with as his primary choice.

"Live and Let Die" is the first of two films featuring Louisiana portrayed by , who appeared again in "The Man with the Golden Gun". It is also the first of two films featuring as , who reprised the role in "", despite it being a traditon of a different actor for each film Leiter appeared in. Hedison had said "I was sure that would be my first and last" [ [http://www.mi6.co.uk/sections/articles/interview_david_hedison.php3?t=lald&s=lald James Bond 007 :: MI6 - The Home Of James Bond ] ] before being cast again.

, who played the Italian agent sharing Bond's bed in the film's opening, was recommended for the part by Roger Moore after he had appeared with her on TV. Smith said that Moore was extremely polite to work with, but she felt very uncomfortable being clad in only blue bikini panties while Moore's wife was on set overseeing the scene.

This was the only Bond film until 2006 not to feature 'Q', played at this stage by . Llewellyn was currently appearing in the TV series "", but written out of two episodes to appear in the film. The producers however had already decided not to include the character, much to Llewellyn's annoyance. [ [http://www.follyfoot-tv.co.uk/jott/des_inter/des_interveiw.htm Desmond Llewellyn's final interview with reference to "Live and Let Die" and "Follyfoot"] ]

Production began in 1972, with filming in , along with location shooting in , , and doubling for the fictional San Monique. [cite video|title=Exotic Locations|location="Live and Let Die", Ultimate Edition, disc 2|accessdate=2008-03-22] The producers were reportedly required to pay to a local to ensure the crew's safety. When the cash ran out, they were "encouraged" to leave.

Ross Kananga suggested the jump on crocodiles, and was enlisted by the producers to do the stunt. The scene took five takes to be completed, including one in which the last crocodile snapped at Kananga's heel, tearing his trousers. The production also had trouble with snakes. The was so afraid that she refused to be on set with them; an actor fainted while filming a scene where he is killed by a snake; Jane Seymour became terrified as a reptile got closer, and only agreed to fall into the snake-filled casket because Princess Alexandra was visiting the set.

The boat chase was filmed on the Louisiana , with some interruption caused by flooding. 26 boats were built by the Glastron boat company for the film. Seventeen were destroyed during rehearsals. [ [http://seattletimes.nwsource.com/html/outdoors/2003539511_nwwboatshow25.html The Seattle Times: Outdoors: Big, gaudy and Bond-like, Seattle Boat Show exhibit cuts to the chase ] ] The speedboat jump scene over the bayou, filmed with assistance with a specially-constructed ramp, unintentionally set a at the time with 110 feet cleared. Unfortunately, the waves created by the impact caused the following boat to flip over.

The chase involving the was filmed with a second-hand London bus adapted by having a top section removed and then replaced so that it ran on s and so would slide off on impact.

Taking a temporary hiatus from scoring Bond films, John Barry was replaced by for the film.

For the theme song, Martin teamed with former-Beatle , who had previously been considered for "Diamonds Are Forever" in 1971. This was the first time the pair worked together since "Abbey Road" in 1969. The theme was written by Paul and his wife and performed by Paul and his group, Wings. The tune, the first 'true' song used to open a Bond film, was a major success in the U.S. (#2 for three weeks) and the UK (#9), Paul's best showings in over a year. For many years "Live and Let Die" was a highlight of his live shows, complete with fireworks and lasers and in 2005, it was performed live by McCartney during the halftime show at . In 1991 the song was covered by the rock band . had a notable part in "Live and Let Die" where they lead a funeral march for an assassinated victim. Trumpeter plays the killer.

The world premiere of the film was at in on 6 July 1973 and released generally in the United Kingdom on 12 July 1973. It was released earlier however, in the United States on 27 June 1973.

The film holds the record for the most viewed broadcast film on television in the United Kingdom by attracting 23.5 million viewers when premiered on on 20 January 1980.

gave the film a 62% "fresh" rating, however this is ratings from various reviewers since 2000, which gives a more modern reception of the film. [cite web|url=http://www.rottentomatoes.com/m/live_and_let_die/| title=Live and Let Die (1973)| work=Rotten Tomatoes| publisher=| accessdate=2008-03-14]

Roger Ebert of "" stated that Moore "has the superficial attributes for the job: The urbanity, the quizzically raised eyebrow, the calm under fire and in bed". He felt though that Moore wasn't satisfactory in living up to the legacy left by Sean Connery in the precedding films. On the villians he rated them "are a little banal" and that the film "doesn't have a Bond villain worthy of the Goldfingers, Dr. Nos and Oddjobs of the past." [cite web|url=http://rogerebert.suntimes.com/apps/pbcs.dll/article?AID=/19730706/REVIEWS/307060301/1023| title=Live and Let Die| work=Chicago Sun-Times| accessdate=2008-10-05] "BBC Films" reviewer William Mager praised the use of locations band said that the plot is "convoluted". He stated that "Connery and Lazenby had an air of concealed thuggishness, clenched fists at the ready, but in Moore's case a sardonic quip and a raised eyebrow are his deadliest weapons" [cite web| url=http://www.bbc.co.uk/films/2001/07/26/live_and_let_die_1973_review.shtml| title=Live and Let Die (1973)| work=| publisher| accessdate=2008-10-05]