Princess Alexandra carries out royal duties on behalf of her cousin, Queen Elizabeth II. As of October 2011 she is 39th in the line of succession to the thrones of 16 states; at the time of her birth in 1936, she was sixth in line to the thrones of seven countries.

Princess Alexandra was born on 25 December 1936 at 3 Belgrave Square, London. Her father was The Prince George, Duke of Kent, the fourth son of George V and Queen Mary. Her mother was Princess Marina of Greece and Denmark, a daughter of Prince Nicholas of Greece and Denmark and Grand Duchess Elena Vladimirovna of Russia. As a male-line granddaughter of the British monarch, she was styled as a British princess with the prefix Her Royal Highness. At the time of her birth, she was sixth in the line of succession to the British throne. The Princess was baptised in the Private Chapel of Buckingham Palace, on 9 February 1937, and her godparents were: King George VI and Queen Elizabeth (her paternal uncle and aunt); the Queen of Norway (her grandaunt); Princess Nicholas of Greece and Denmark (her maternal grandmother); Princess Olga of Yugoslavia (her maternal aunt); the Princess Beatrice (her paternal great-grandaunt); the Earl of Athlone (her paternal granduncle); and Count Karl Theodor of Törring-Jettenbach (her maternal uncle by marriage). Of her godparents, only the King and Queen and Lord Athlone were present.[2] She was named after her great-grandmother, Queen Alexandra, her maternal grandmother, Princess Nicholas of Greece and Denmark, and both of her maternal aunts, Countess Karl Theodor of Törring-Jettenbach and Princess Paul of Yugoslavia. She received the name Christabel because she was born on Christmas Day like her aunt by marriage Princess Alice, Duchess of Gloucester.

Princess Alexandra spent most of her childhood at her family's country house, Coppins, in Buckinghamshire. She lived with her grandmother Queen Mary, the widow of George V, during World War II at Badminton. Her father was killed in an aeroplane crash near Caithness, Scotland on 25 August 1942 while serving in the Royal Air Force.

On 24 April 1963, she married the Hon Angus James Bruce Ogilvy (1928–2004), the second son of the 12th Earl of Airlie and Lady Alexandra Coke, at Westminster Abbey. The wedding ceremony was attended by all the members of the Royal Family and was broadcast worldwide on television, watched by an estimated 200 million people.[citation needed]

Ogilvy declined the Queen's offer of an Earldom upon marriage. This meant that any children they might have would carry no titles at all.

Angus Ogilvy remained in line to the Earldom of Airlie until his death. He received a Knighthood in 1988, and was appointed to the Privy Council in 1997. Princess Alexandra and Sir Angus have two children, James and Marina, and four grandchildren, none of whom carries out Royal duties: 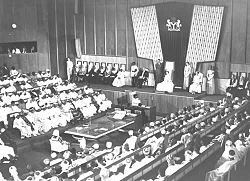 Since the late 1950s, Princess Alexandra has carried out an extensive programme of royal engagements in support of the Queen, both in the United Kingdom and overseas.

Princess Alexandra was 15 years old when her cousin ascended to the throne. It has been customary for eldest sons to carry out official duties which are included in the Court Circular. Princess Alexandra was asked by the Queen to undertake such duties because of a lack of female members of the family[why?]. The only other princesses by birth were the Queen's sister Margaret, and the Queen's young daughter, Princess Anne.

In 1959, she carried out an extensive tour of Australia, and attended the Queensland Centenary Celebrations. She returned to the country in 1967 for a private holiday, but also carried out engagements in Canberra and Melbourne. The Princess represented the Queen when Nigeria gained its independence from the United Kingdom on 1 October 1960, and later opened the first Parliament on 3 October. Later overseas tours included visits to Canada, Italy, Norway, Thailand, Gibraltar and the Falkland Islands.

Princess Alexandra receives £225,000 per year from the Civil List to cover the cost of official expenses; although like the other members of the Royal Family (except the Duke of Edinburgh) the Queen repays this amount to the Treasury. Alexandra lives at Thatched House Lodge in Richmond, London a Crown property purchased on a 150-year lease from the Crown Estate Commissioners by Sir Angus Ogilvy after their wedding in 1963.

It was reported in the London Evening Standard on 11 January 2006, that a widow living alone in the seven-bedroom house was too full of memories and that she wanted to sell her lease. However, she currently has not changed her mind. She also has use of a grace-and-favour apartment at St James's Palace in London. Her husband supported Alexandra in Royal duties at times, although he also had an independent career.

She is the patron of the Blackie Foundation Trust, a charity dedicated to the promotion of research and education in homoeopathy. She is also a patron of the English National Opera, the London Philharmonic Choir,[3] the not-for-profit housing association Anchor, the charity Independent Age, St Christopher's Hospice in Sydenham, England, the Nature in Art Trust[4] and London Academy of Music and Dramatic Art (LAMDA), the oldest drama school in the English speaking world and President of WWF-UK.

Although described as "one of the most popular members of the royal family",[5] Princess Alexandra and her family have come under media scrutiny at various points in her life. Her husband was a director at a mining company, Lonrho, when it was involved in a scandal over the breaking of trade sanctions against British-held Rhodesia. The Prime Minister at the time, Edward Heath, criticised the company, and Ogilvy resigned his directorships.

Her full style is Her Royal Highness Princess Alexandra Helen Elizabeth Olga Christabel, The Honourable Lady Ogilvy, Royal Lady of the Most Noble Order of the Garter, Dame Grand Cross of the Royal Victorian Order. 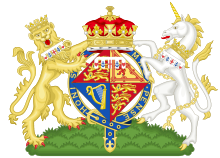 Coat of Arms of Princess Alexandra, The Honourable Lady Ogilvy.

Princess Alexandra's personal Coat of Arms was granted in 1961. Her Arms are the Royal Coat of Arms of the United Kingdom, with a five point label—the standard differentiation for a male-line grandchild of a British Monarch. The first and fifth points bear a red heart, the second and fourth points bear a blue anchor, and the third point bears a red cross.