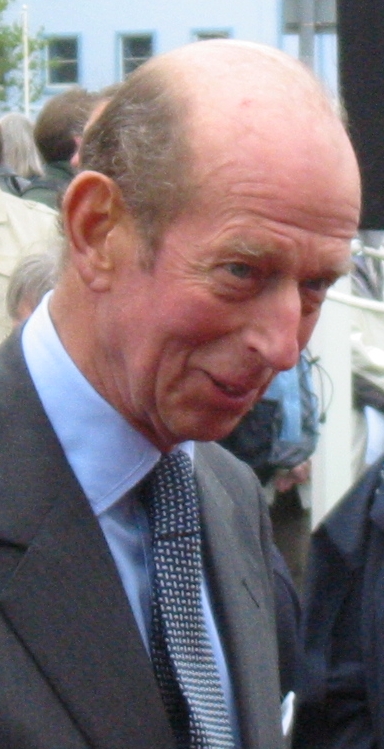 Prince Edward, Duke of Kent (Edward George Nicholas Patrick Paul; born 9 October 1935) is a member of the , a grandchild of George V. He has held the title of since 1942.

The Duke of Kent holds the UK's most senior position – Grand Master – in .

The Duke of Kent carries out royal duties on behalf of his first cousin, Queen Elizabeth II. He is perhaps best known as President of the , presenting the winner of the Wimbledon men's tennis tournament with the winning shield. He also served as the United Kingdom's , retiring in 2001. He is also the President of the Scout Association.

The Duke of Kent is currently 24th in the .

Prince Edward was born on 9 October 1935, at No. 3 , . His father was , the fourth son of George V and Queen Mary. His mother was (née Princess Marina of Greece and Denmark), the daughter of , and Grand Duchess Helen Vladimirovna of Russia. As a grandson of the British sovereign in the male line, he was styled as a Prince of the United Kingdom of Great Britain and Northern Ireland with the prefix, "His Royal Highness", styled "HRH" Prince Edward of Kent.

The Prince was baptised in the Private Chapel of Buckingham Palace on 20 November 1935 by the , and his godparents were: George V, Queen Mary, The Prince of Wales, The Princess Royal, the Duke of Connaught (whose son, , stood proxy), the Duchess of Argyll and .

Prince Edward began his schooling at in before going on to and then in . After school he entered where he won the for foreign languages and qualified as an interpreter of French.

As a , he was destined for royal duties at an early age. Aged 16, he walked behind the coffin of his uncle, George VI, at his in 1952. In 1953, he attended the of his cousin, Elizabeth II, paying at her throne after her crowning (following the Dukes of Edinburgh and Gloucester).

The Duke of Kent graduated from the Royal Military Academy in 1955 as a in the , the beginning of a military career that would last over 20 years. The Duke of Kent saw service in from 1962-63 and later served on the staff in Eastern Command. Later in 1970, the Duke commanded a squadron of his regiment serving in the British in , part of the force enforcing peace between the Greek and Turkish halves of the island. The Duke retired from the Army in 1976 with the rank of . He was subsequently promoted on 11 June 1983 and Field Marshal on 11 June 1993.It was allegedWho|date=February 2008 that the Duke's regiment was deliberately held back from service in , during the Troubles in the 1970s. Although the Duke was keen to join his regiment anywhere it was required to go, the British government were not keen to see the Queen's cousin exposed to potential danger, given the embarrassment his death or capture would cause. However, this story is almost certainly untrue, as it would have been much less disruptive to have simply ensured that the Duke was assigned elsewhere if his unit was required in .Fact|date=February 2008

The Duke of Kent married Katharine Worsley at on 8 June 1961. Katharine is the only daughter of Sir William Arthrington Worsley, 4th Bt., and his wife, Joyce Morgan. After their marriage, she was styled Her Royal Highness The Duchess of Kent, though in 2002, she abandoned the style of Royal Highness and has expressed a preference to be known as Katharine Kent, or , the latter the typical style of a divorced or widowed peeress, which she is not.

The Duke and Duchess of Kent have three children, none of whom carries out royal duties:

The couple also had a stillborn child on 5 October 1977.

The Duke and Duchess of Kent reside at , in .

The Duke of Kent has performed royal duties on behalf of his cousin, the Queen, for over 50 years. The Duke has represented the Queen during independence celebrations in the former British colonies of , , , and most recently Ghana for their (Ghana's) 50th Independence Anniversary Celebration. He has also acted as during periods of the Queen's absence abroad.

One of the Duke's major public roles for many years was Vice-Chairman of , and later as the United Kingdom's Special Representative for International Trade and Investment . This position saw the Duke travel abroad to represent the British government in fostering trade relations with foreign countries and organisations.

His other interests include serving as the president of the Wimbledon All England Lawn Tennis and Croquet Club, a position he succeeded from his late mother, Princess Marina, Duchess of Kent. His other roles include President of the , the , the and the .

Edward is President of the Scout Assosciation, and, along with Prince William, visited the Centenary World Scout Jamboree at Hylands Park, Chelmsford in July 2007.

For almost 29 years Edward as been the Patron of Endeavour a national youth organisation. He has also served as of The Honourable Society of since 2001, a position previously occupied by his father.

*Chancellor of the
*: Grand Master of the and First Grand Principal of the Supreme Grand Chapter of Royal Arch Masons of England
*Patron of the , UK
*Patron of , London

The Royal Arms differenced by a label of five points argent, the first, third and fifth points charged with a blue anchor, and the second and fourth points with a red cross.

Crest: On a coronet of four crosses-patées alternated with four strawberry leaves a lion statant guardant or, crowned with the like coronet and differenced with a label as in the Arms.

Supporters: The Royal Supporters differenced with the like coronet and label.

Prince Edward, Duke of Kent's patriline is the line from which he is descended father to son.

His (the principle behind membership in Germanic royal houses) can be traced back through the generations -- which means that if The Duke of Kent were to choose an historically accurate house name it would be Wettin, as all his male-line ancestors have been members.

The line diverges from the British royal line at Victoria's husband, Prince Albert, and from then on follows his paternal ancestors.