The Prince Edward, Duke of Kent and Strathearn (Edward Augustus; 2 November 1767 – 23 January 1820) was a member of the British Royal Family, the fourth son of King George III and the father of Queen Victoria. He was created Duke of Kent and Strathearn and Earl of Dublin on 23 April 1799, the same year he became commander-in-chief in North America.

Prince Edward was born on 2 November 1767.[1] His father was the reigning British monarch, George III, the eldest son of The Prince Frederick, Prince of Wales and Augusta of Saxe-Gotha. His mother was Queen Charlotte (née Duchess Charlotte of Mecklenburg-Strelitz), the daughter of Duke Charles Louis Frederick of Mecklenburg-Strelitz. As a son of the British monarch, he was styled His Royal Highness The Prince Edward from birth, and was fourth in the line of succession to the throne. He was named after his paternal uncle the Duke of York and Albany, who had died several weeks earlier and was buried at Westminster Abbey the day before his birth.

Prince Edward was baptised on 30 November 1767; his godparents were The Hereditary Prince of Brunswick-Lüneburg (his paternal uncle by marriage, for whom The Earl of Hertford, Lord Chamberlain, stood proxy), Duke Charles of Mecklenburg-Strelitz (his maternal uncle, for whom The Earl of Huntingdon, Groom of the Stole, stood proxy), The Hereditary Princess of Brunswick-Wolfenbüttel (his paternal aunt, who was represented by a proxy) and The Landgravine of Hesse-Kassel (his twice-paternal great-aunt, for whom The Duchess of Argyll, Lady of the Bedchamber to The Queen, stood proxy).

In 1785, Prince Edward began his military training in Germany.[1] King George III intended to send him to the University of Göttingen, but decided against it upon the advice of the Duke of York. Instead, Prince Edward went to Lüneburg[1] and later Hanover, accompanied by his tutor, Baron Wangenheim.[1] During 1788 to 1789 he completed his education in Geneva.[1]

In 1789 he was appointed colonel of the 7th Royal Fusiliers.[1] In 1790 he returned home without leave and, in disgrace, was sent off to Gibraltar as an ordinary officer.[1]

He was ordered to Canada in 1791.[1] The prince received promotion to the ranks of major-general in October 1793[1] and lieutenant-general in January 1796.[1] On 24 April 1799,[2] he was created Duke of Kent and Strathearn and Earl of Dublin, and was later, in May, promoted to the rank of general and appointed the Commander-in-Chief, North America.[1] For most of this period he lived in Halifax, Nova Scotia[1] and was instrumental in shaping that port's military defences for protecting the important Royal Navy base, as well as influencing the city's and colony's socio-political and economic institutions.

On 24 May 1802, the Duke began an appointment as Governor of Gibraltar, with express orders from the government to restore discipline among the troops.[1] However, the Duke's harsh discipline precipitated a mutiny by soldiers in the Royal Fusiliers and the 25th Regiment on Christmas Eve 1802.[1] The Duke of York, then Commander-in-Chief of the Forces, recalled him in May 1803 after receiving reports of the mutiny.[1] The Duke refused to return to England, despite orders to, until his successor arrived. The Duke of Kent formally held the governorship of Gibraltar until his death, although the Duke of York forbade him to return. As a consolation for the end of his active military career, he was promoted to the rank of field marshal[1] and appointed Ranger of Hampton Court Park on 5 September 1805.[1] The Duke of Kent continued to serve as honorary colonel of the 1st Regiment of Foot (the Royal Scots) until his death.

The Duke of Kent had a number of mistresses, most notably Adelaide Dubus, (with whom he may have had an illegitimate daughter Adelaide Victoria Augusta Dubus 1789–1790) and later Julie de St Laurent. However, he remained single until 1818 when, following the death of the only legitimate grandchild of George III, Princess Charlotte Augusta of Wales, the succession began to look uncertain. The Prince Regent and his younger brother, the Duke of York, though married, had no surviving legitimate children. King George's surviving daughters were all past likely childbearing age. The other unmarried sons of King George III, the Duke of Clarence (later King William IV), the Duke of Kent, and the Duke of Cambridge, all rushed to contract lawful marriages and provide an heir to the throne. (The fifth son of King George III, the Duke of Cumberland, was already married but had no living children at that time, whilst the marriage of the sixth son, the Duke of Sussex, was void because he had married in contravention of the Royal Marriages Act 1772.)

The Duke and Duchess sought to find a place where they could live inexpensively, considering the Duke's great debts (which were not paid until his daughter took the throne and paid them over time from her income). After the coast of Devon was recommended to them, they took a lease on Woolbrook Cottage in Sidmouth.[1]

The Duke took great pride in his daughter, bringing the infant to a military review[when?], to the outrage of the Prince Regent, who demanded to know what place the child had there.

The Duke of Kent died on 23 January 1820 at Woodbrook Cottage, Sidmouth, Devon, from pneumonia.[1] He was buried at St. George's Chapel, Windsor Castle.[1] He died only six days before his father, George III, and less than a year after his daughter's birth.

The Duke of Kent predeceased his father and his three elder brothers, but, since none of his elder brothers had any surviving legitimate children, his daughter, Victoria, succeeded to the throne on the death of King William IV in 1837. 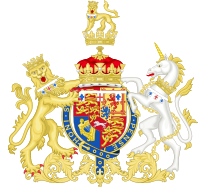 Arms of Prince Edward, Duke of Kent and Strathearn used from 1801 until his death.

As a son of the sovereign, the Duke of Kent had use of the arms of the kingdom, differenced by a label argent of three points, the centre point bearing a cross gules, the outer points each bearing a fleur-de-lys azure.[3] HRH The Duke of Kent and Strathearn was made first Grand Master of The United Grand Lodge of England in 1813.