Duke of Connaught and Strathearn 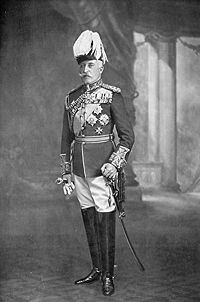 The title Duke of Connaught and Strathearn was granted by Queen Victoria of the United Kingdom of Great Britain and Ireland to her third son, Prince Arthur.

By tradition members of the sovereign's family received titles associated with England, Scotland, Ireland and Wales, the four home nations that made up the United Kingdom. The Dukedom of Connaught and Strathearn was named after one of the four provinces of Ireland, now known by its modern Irish language-based spelling of Connacht. It was seen as the title that if available would henceforth be awarded to a monarch's third son; the first son was traditionally Duke of Cornwall (in England) and Duke of Rothesay (in Scotland), and would be made Prince of Wales at some point, while the second son would often become Duke of York, if the title were available.

Since the exit of the Republic of Ireland from the United Kingdom in 1922, titles related to locations in the Republic have not been awarded (though Prince Edward, Prince of Wales—in 1936 briefly King Edward VIII—was made a Knight of the Order of St Patrick). However, territorial titles relating to Northern Ireland have continued to be awarded.

After Prince Arthur's death in 1942, the title was inherited by his grandson, Alastair. In the absence of any male heirs, the Dukedom became extinct when Alastair died, 15 months after his grandfather.

Dukes of Connaught and Strathearn (1874)

Memorial Site for HRH The Duke of Connaught, Governor General of Canada