Ernst August, Crown Prince of Hanover, Heir of Brunswick, 3rd Duke of Cumberland and Teviotdale, 3rd Earl of Armagh, (Ernest Augustus William Adolphus George Frederick; 21 September 1845 – 14 November 1923), was the eldest child and only son of George V of Hanover and his wife, Marie of Saxe-Altenburg. Ernst August was deprived of the thrones of Hanover upon its annexation by Prussia in 1866 and later the Duchy of Brunswick in 1884. Although he was the senior male-line great-grandson of George III, the Duke of Cumberland was deprived of his British peerages and honours for having sided with Germany in World War I.

Prince Ernest Augustus of Hanover, Duke of Brunswick and Lunenburg, Prince of the United Kingdom of Great Britain and Ireland, was born at Hanover during the reign of his paternal grandfather, Ernest Augustus I. He became the Crown Prince of Hanover upon his father's ascension as George V in November 1851. William I of Prussia and his minister-president Otto von Bismarck deposed George V for having sided with the defeated Austria in the 1866 Austro-Prussian War. During that war, the Crown Prince saw action at the Battle of Langensalza.

After the war, the exiled Hanoverian royal family took up residence in Hietzing, near Vienna, but spent a good deal of time in Paris. George V never abandoned his claim to the Hanoverian throne and maintained the Guelphic Legion at his own expense. The former Crown Prince travelled during this early period of exile. While visiting his second cousin Albert Edward, Prince of Wales (later King Edward VII) at Sandringham in 1875, he met Princess Thyra of Denmark (29 September 1853 – 26 February 1933), the youngest daughter of King Christian IX and a sister of the Princess of Wales (later Queen Alexandra).

When King George V died in Paris on 12 June 1878, Prince Ernst August succeeded him as Duke of Cumberland and Teviotdale in the Peerage of Great Britain and Earl of Armagh in the Peerage of Ireland. Queen Victoria created him a Knight of the Garter on 1 August 1878.

On 21 December/22 December 1878, he married Princess Thyra of Denmark at Copenhagen.

Queen Victoria appointed the Duke of Cumberland a major general in the British Army in 1886 and promoted him to lieutenant general in 1892 and general in 1898. Although he was a British peer and a prince of Great Britain and Ireland, he continued to consider himself an exiled monarch of a German realm, making his home in Gmunden, Upper Austria. He refused to disclaim his succession rights to Hanover. In 1884, the reigning Duke William of Brunswick, a distant cousin, died and the Duke of Cumberland was hereditary heir and first in line of succession to the Duchy. Bismarck, however, managed to exclude him from this inheritance, as he had also from his father's throne, declaring the throne vacant and putting the Duchy under Prussian administration.

The Duke of Cumberland was partially reconciled with the Hohenzollern dynasty in 1913, when his surviving son, Prince Ernst August, married the only daughter of German Emperor Wilhelm II, the grandson of the Prussian king who had deposed his father. He renounced his succession rights to the Brunswick duchy (which had belonged to the Guelph dynasty since 1235) on 24 October 1913. In exchange, the younger Ernst August became the reigning Duke of Brunswick on 1 November. William II created the elder Ernst August a Knight of the Order of the Black Eagle. In 1918 the younger Duke Ernst August abdicated his throne along with the other German princes when all the German dynasties were disestablished by the successor German provisional Government which was established when the Emperor himself abdicated and fled Germany in exile to the Netherlands.

The outbreak of World War I created a breach between the British Royal Family and its Hanoverian cousins. On 13 May 1915, King George V of Great Britain ordered the removal of the Duke of Cumberland from the Roll of the Order of the Garter. Under the terms of the Titles Deprivation Act 1917, on 28 March 1919 his name was removed from the roll of Peers of Great Britain and of Ireland by Order of the King in Council for "bearing arms against Great Britain."

Prince Ernst August, the former Crown Prince of Hanover and former Duke of Cumberland, died of a stroke on his estate at Gmunden in November 1923. 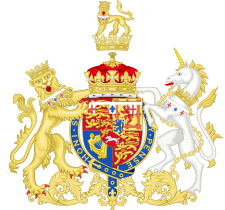 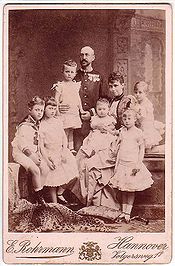 The Duke and Duchess of Cumberland had six children.