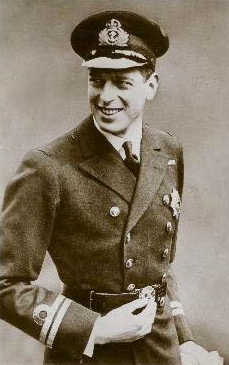 The Prince George, Duke of Kent (George Edward Alexander Edmund; - ) was a member of the , the fourth son of George V and . He held the title of from 1934 until his death in 1942.

Prince George was born on at York Cottage on the Sandringham Estate in , . His father was The Prince George, Prince of Wales, the eldest surviving son of Edward VII and Queen Alexandra. His mother was the Princess of Wales, the eldest daughter of The Duke and Duchess of Teck. At the time of his birth, he was fifth in the line of succession. As a grandchild of the British monarch in a male line, he was styled "His Royal Highness" Prince George of Wales.

He was baptised in the Private Chapel at on by , (with "ordinary" water, as opposed to water from the , which is almost always used for royal christenings). His godparents were his grandparents King Edward VII and Queen Alexandra, his grand-uncle , , and his grand-aunts The Dowager Empress of Russia and Princess Christian of Schleswig-Holstein.

Prince George received his early education from a tutor and then followed his elder brother, Prince Henry (later the Duke of Gloucester), to St. Peter's Court Preparatory School at Broadstairs, in Kent. At age thirteen, like his brothers, Prince Edward (later Edward VIII) and Prince Albert (later George VI), before him, he went to naval college, first at Osborne and, later, at Dartmouth. He remained in the until 1929, serving on the Iron Duke and later the Nelson. After leaving the navy, he briefly held posts at the Foreign Office and later the Home Office, becoming the first member of the to work as a civil servant.

At the start of , he returned to active military service at the rank of , briefly serving on the Intelligence Division of the . In April 1940, he transferred to the . He temporarily relinquished his rank as (the equivalent of Rear Admiral) to assume the post of Staff Officer in the RAF Training Command at the rank of .

Princess Marina became known as HRH The Duchess of Kent following the marriage. She and her husband had three children:
* Prince Edward of Kent, born
* , born
* , born

Both before and after his marriage, Kent had a long string of affairs with both men and women, from socialites to Hollywood celebrities. The better known of his partners included the African-American cabaret singer , banking heiress , socialite Margaret Whigham (later Duchess of Argyll), musical star and actor , with whom he carried on a 19-year affair. [Picknett, Prince, Prior & Brydon, p. 56.] Intimate letters from the Duke to Coward are believed to have been stolen from Coward's house in 1942. [Coward, Noel, "The Letters of Noel Coward," Alfred A. Knopf, 2007] There is some suggestion that the duke had an affair with , the of (1892&ndash;1968), in the late 1920s, according to British historian . [Moore, Lucy, "Maharanis," Viking, 2004.]

The Duke of Kent is also said to have been addicted to drugs (notably and ) — a weakness which his brother the Prince of Wales was deputed to cure him of during the latter part of the 1920s — and reportedly was blackmailed by a to whom he wrote intimate letters. Another of his reported bisexual liaisons was with his distant cousin ; homosexual spy and art historian was reputedly another intimate. [Picknett, Prince, Prior & Brydon, p. 57.] The Duke was known to have attempted to court Queen Juliana of the Netherlands. She spurned the overture and married Prince Bernhard of Lippe-Bisterfeld instead.

In addition to his legitimate children, the Duke is said to have had a son by (née Alice Gwynne) (1898&ndash;1946), an American socialite whom he reportedly shared in a with , the bisexual son of the Argentine ambassador to the Court of St. James's. Known as "the girl with the silver syringe", drug addict Preston, a cousin of railroad heiress , was married first to Horace R.B. Allen and then, in 1925, to banker Jerome Preston. [Picknett, Prince, Prior & Brydon, p. 58.] She died after jumping out of a window of the in . According to the memoirs of a friend, Loelia, Duchess of Westminster, Prince George's brother (the ) believed that the son was (1926&ndash;1969), the adopted son of American publisher and the first husband of , sister of . [Westminster, Loelia, Duchess of, "Grace and Favour", Weidenfeld Nicholson, 1961]

The Duke's early life is dramatised in 's 2003 film "" - a biopic of the life of his younger brother John, who suffered from epilepsy, was isolated from most of the family and kept away from public gaze, and who died at the age of 13. In the film, the teenage Prince 'Georgie' is portrayed as sensitive, intelligent, artistic and almost uniquely sympathetic to his brother's plight. He is shown to detest his time at Naval College, and to have a difficult relationship with his austere father.

Much of his later life was outlined in the documentary film "The Queen's Lost Uncle" mentioned above. The Duke's and drug addictions were explored in "African Nights", a 2004 play written by American playwright .

In 1932 he was appointed as of The Honourable Society of , a position previously occupied by his father, the King.

Prince George was killed in northern on , as a passenger in the crash of a airplane. The plane was en route from Evanton, Rosshire to , and then on to .

Many questions remain about this mission and Prince George's role in it. [ [http://www.spartacus.schoolnet.co.uk/2WWkentD.htm Prince George, Duke of Kent ] ] An unproven claim has been made that British Intelligence assassinated Prince George. One possible reason is given by author , in the second, revised edition of his book "The Dutchess of Windsor: The Secret Life", as serious concern over the Duke of Kent's lack of discretion and his political dealings with Nazi leadership, with negotiations towards a separate peace, to allow Germany to concentrate on its war with the in eastern Europe. Higham writes that the (SOE), worried that the Duke would talk about these matters once he left the British Isles, tampered with the plane before its takeoff, ensuring its crash soon afterwards, with the deaths of all but one of the passengers. ["The Duchess of Windsor: The Secret Life", second, revised edition, by , 2005.]

There is another claim that the plane struck Wolf Rock on Ben Morven while attempting to take off from Loch More after picking up who had been smuggled north after parachuting on Eaglesham Moor, near East Kilbride on a mission to broker a peace deal between Germany and Britain. The Sunderland was certainly heading Southwest when it hit the ground and broke up, although it has been claimed that The Duke of Kent was at the controls and he was "buzzing" his cousin's lodge at Langwell Estate, Berridale. Purportedly, women's clothing and footwear was found at the crash site by estate workers first on the scene. A possible reason for the Sunderland crashing was it was unable to gain enough altitude/airspeed after take off to clear the hillside, due to its short take-off on Loch More, extra passenger and heavy fuel load, enough to take it to Ayrshire without stopping. One member of crew survived the crash with only minor injuries, but never talked about the event and took what he knew to the grave, further fuelling conspiracy theorists. [ [http://www.martinfrost.ws/htmlfiles/royal_nazis.html Royal Nazis and the Scottish connection ] at www.martinfrost.ws]

The Duchess of Kent had given birth to their third child, , only six weeks earlier. The Duke's remains lay initially in . Later they were buried in the Royal burial ground, directly behind Queen Victoria's mausoleum, at , Windsor. He was succeeded as by his eldest son, Edward.

Around the time of his elder brother Prince Henry's twenty-first birthday, Prince George was granted the use of the Royal Arms, differenced by a label argent of three points, each bearing an anchor azure. [ [http://www.heraldica.org/topics/britain/cadency.htm Heraldica – British Royal Cadency] ]