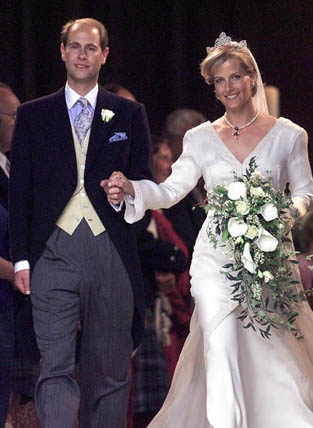 Edward was born at , . His mother is the current reigning Monarch of the and the s, Elizabeth II, the elder daughter of George VI and Queen Elizabeth (later Queen Mother). His father is , the only son of Prince Andrew of Greece and Denmark and .

He was baptised in the Private Chapel at on 2 May 1964 by Robert Woods, . His godparents were: Prince Richard of Gloucester (now the Duke of Gloucester), , The Earl of Snowdon, The Duchess of Kent (for whom stood proxy) and his paternal aunt, .

As a child of the reigning monarch, he was styled "His Royal Highness" The Prince Edward from birth.

Prince Edward, like other royal children at that time, was educated by a private until the age of seven. Afterwards he attended Gibbs School, in , West London. In 1972, he went to near Ascot in . Following in the footsteps of his father and brothers, he attended in and was appointed head boy in his last term.

Like his brother, Prince Andrew, Prince Edward spent a "" abroad, spending two terms at the Collegiate School, , , as a house tutor/junior master during September 1982.

Returning to England, Prince Edward enrolled at Jesus College, , reading history. He graduated with a third class BA degree in 1986. Subsequently, he was awarded an MA (Cantab.) degree in 1991.

On leaving university, Prince Edward joined the to train as an officer. However, he resigned his commission in January 1987, before graduation. After leaving the Marines, Prince Edward became more involved in theatre, an activity he had enjoyed extensively at school and university. In the late 1980s, he worked for two theatrical production companies, including 's Really Useful Theatre Company. During his time at Lloyd Webber's company, he worked on such plays as "", "", and "Cats", and dated actress for two years.

Prince Edward's first foray into the world of television production was, "" television programme in June 1987, in which teams sponsored by himself and other members of the Royal Family competed for charity. In 1993, Prince Edward formed the Ardent Television production company, under the name Edward Windsor. Ardent was heavily involved in the production of documentaries and dramas, particularly on the Royal Families of Europe. With extensive access to the Royal Archives at , Prince Edward had plenty of material for his work. However, he was accused in the media of using his Royal connections for personal and business gain, particularly given the financial problems of Ardent since its founding (it reported losses in all years of existence except one). In 2002, the Prince announced that he would step down as director of production and joint managing director of Ardent to concentrate on his public duties and to support the Queen during her year.

During his television career, the Prince used the names Edward Windsor and, later, Edward Wessex, leading "", for one, to refer to him as "the Edward formerly known as Prince".

In 1994, the leaders of Estonia's (now defunct) Royalist Party, with 10 percent of the seats in the Estonian National Parliament, wrote to Prince Edward indicating that they would, if they came to power, like to offer him the position of King of Estonia. In their letter, they said that they wanted Edward as King because of their admiration "for him, Britain, its monarchy, democracy and culture". It is unknown how, or even if, the Prince responded, but he obviously has not assumed, and almost certainly never will assume, the non-existent throne of this Baltic state

On 6 January 1999 the Prince announced his engagement to Sophie Rhys-Jones, a public relations manager with her own firm. Their wedding took place on 19 June 1999 at . This was a break with the recent tradition of holding large formal royal weddings at .

On his wedding day, the Queen conferred the titles of and Viscount Severn on Prince Edward. This was a break with tradition, whereby the sons of a sovereign were usually created a , but the Earldom of Wessex has a distinguished Royal lineage, the having played the leading role in the unification of . The last person known as "Earl of Wessex" was , prior to his accession to the English throne as King Harold II in 1066. Edward is styled "HRH" The Earl of Wessex, with Sophie taking the style "HRH" The Countess of Wessex.

It was also announced at that time that the Earl of Wessex would be created when the current creation of that Dukedom, held by Prince Philip since 1947, reverts to the Crown

In addition, it was announced that any children of the Earl and Countess would not use the style Prince or Princess with the style , to which they are entitled under the Letters Patent drawn up by George V in 1917. Instead, as the children of the Earl, the first-born male would use the courtesy title Viscount Severn, any further sons "The Honourable", and all daughters "Lady"

The Earl and Countess of Wessex have two children: (born 8 November 2003) and a son, James, Viscount Severn (born 17 December 2007) [cite news|url=http://www.royal.gov.uk/output/Page5586.asp|title=Countess gives birth to a baby boy|publisher=|date=17 December 2007] . It is expected that Viscount Severn will take the courtesy title Earl of Wessex when his father becomes Duke of Edinburgh and will, in time, succeed his father to the Dukedom.

The family reside at in Surrey, once the home of the Duke of Connaught's family.

The Earl and Countess of Wessex carry out a full schedule of Royal duties on behalf of the Queen, receiving monies from the Queen of £141,000 per annum. [ [http://www.royal.gov.uk/OutPut/Page4968.asp The Monarch Today] , Official Website of the British Monarchy, Retrieved 2007-12-11]

The Earl has, in recent years, succeeded to many of the roles of his father, the Duke of Edinburgh, who is reducing some of his roles owing to his age. The Earl replaced him as President of the Federation (since 2006 its Vice-Patron) and opened the in . He has also taken over the Duke's role in the scheme (which is very fitting given the understanding that he will become the Duke of Edinburgh upon the death of his parents).

The Earl attended the Duke of Edinburgh Gold Award Ceremony, along with 100 award achievers, at in , , on the 7th of June, 2008.

As part of the celebrations of the 50th anniversary of the Duke of Edinburgh Award scheme, the Prince visited Richard Huish College in Taunton, Somerset. There, he met with several representatives and participants of the scheme. The Earl of Wessex also made a visit to Torquay Boys' Grammar School where he talked, in front of around 400 people, about the Duke of Edinburgh's award scheme.

His other appointments reflect his interests in sport and the arts.

The Prince's style in full: "His Royal Highness The Prince Edward Antony Richard Louis, Earl of Wessex, Viscount Severn, Knight Companion of the Most Noble Order of the Garter, Knight Commander of the Royal Victorian Order, Honorary Member of the , Aide-de-Camp to Her Majesty"

notes = The Earl's personalized are those of the with a label for difference
adopted =
crest =
torse =
helm =
escutcheon = Quarterly 1st and 4th gules three lions passant guardant in pale or armed and langed azure 2nd or a lion rampant gules armed and langued azure within a double tressure flory counterflory of the second 3rd azure a harp or stringed argent
supporters = Dexter a lion rampant gardant Or imperially crowned Proper, sinister a unicorn Argent, armed, crined and unguled Or, gorged with a coronet Or composed of crosses patée and fleurs de lis a chain affixed thereto passing between the forelegs and reflexed over the back also Or
compartment =
motto =
orders =
other_elements =
banner =
badge =
symbolism = As with the Royal Arms of the United Kingdom. The first and third quarters are the arms of England, the second of Scotland, the fourth of Ireland.
previous_versions =