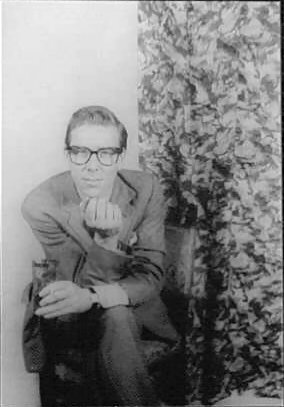 Antony Charles Robert Armstrong-Jones, 1st Earl of Snowdon GCVO RDI (born ) is an English photographer and -winning filmmaker who sits in the by a life granted him in . He was married to Princess Margaret from to . Despite his divorce from Princess Margaret, he maintains a close relationship with the royal family and occasionally takes official photographs of the Queen.

The future Lord Snowdon was born of minor Welsh gentry and ish banking heritage, the only son from the marriage of the (1899&ndash;1966) and his first wife, the society beauty Anne Messel (1902&ndash;1992, later Countess of Rosse). His maternal great-grandfather was the "Punch" cartoonist Linley Sambourne (1844&ndash;1910), his great-great-uncle was a well-known architect, and his mother's brother was , a noted British set and costume designer and architect. His parents separated when he was young, and his childhood was completely lacking any normal emotional warmth - as a schoolboy he contracted polio, and, for the entire six months that he was in Royal Infirmary, his only family visits were from his sister Susan. [ [http://www.telegraph.co.uk/arts/main.jhtml?view=DETAILS&grid=&xml=/arts/2008/06/14/bocou114.xml "Snowdon: the Biography" by Anne de Courcy, reviewed by Duncan Fallowell, Daily Telegraph, 20 June 2008.] ]

After being educated at Eton and Cambridge, where he studied architecture, Armstrong-Jones took up a career as a photographer in the fields of fashion, design and theatre. As his career as a portraitist began to flourish, he became known for his royal studies, among which were the official portraits of his future sister-in-law, Queen Elizabeth II, and the Duke of Edinburgh for their 1957 tour of .

In the early 1960s, he became the picture editor of the "Sunday Times" magazine, and by the 1970s had gained a reputation as one of Britain's most prominent and respected photographers. Though his subject matter includes everything from fashion models to documentary-style images of inner city life and the mentally ill, he is best known for his portraits of world notables (the National Portrait Gallery has more than 100 in its collection), many of them published in "Vogue", "Vanity Fair", and "The Daily Telegraph" magazine. His subjects have included , , , , and others.

In 2001, Snowdon was given a retrospective exhibition at the National Portrait Gallery, "Photographs by Snowdon: A Retrospective", which later travelled to the . More than 180 of his photographs were displayed in an exhibition that honored what the museums called "a rounded career with sharp edges".

On [May] Snowdon, still known as Antony Armstrong-Jones, became engaged to the Queen's sister, Princess Margaret, and they married on at . He was created Earl of Snowdon and Viscount Linley of Nymans in the County of Sussex on , due to concerns over the prospect of a British princess giving birth to a child without a title. The Snowdon title has centuries-old royal associations, since the name Snowdon was borne by the Welsh princes and the House of Gwynedd prior to 1282, though in this instance it was granted as a nod to Armstrong-Jones's Welsh ancestry. The subsidiary Linley title honored Lord Snowdon's great-grandfather Linley Sambourne as well as Nymans, the Messel family estate in West Sussex. David, Viscount Linley, was born ), and a second child, Lady Sarah Armstrong-Jones, on ). Recently it has emerged that Snowdon fathered a daughter shortly before marrying Princess Margaret. [Andy Bloxham [http://www.telegraph.co.uk/news/newstopics/theroyalfamily/2056112/Lord-Snowdon-fathered-a-secret-love-child-just-months-before-marrying-Princess-Margaret.html "Lord Snowdon fathered a secret love child just months before marrying Princess Margaret",] "Sunday Telegraph", 31 May 2008. Retrieved on 28 June 2008.]

The marriage began to collapse very early and publicly. Various causes may have lain behind the failure: on Margaret's side there was a penchant for late-night partying, on Snowdon's, an undisguised sexual promiscuity. ("If it moves, he'll have it," was the summing up of one close friend. "To most of the girls who worked in the Pimlico Road studio, there seemed little doubt that Tony was gay"; to which Snowdon himself responded, "I didn't fall in love with boys - but a few men have been in love with me.")

The break-up lasted sixteen years, accompanied by drugs, alcohol, and bizarre behaviour by both parties. Snowdon did not read books and had no intellectual interests, but Margaret did; Snowdon therefore took to leaving lists between the pages for her to find, of "things I hate about you".According to biographers and Anne de Courcy, one note read: "You look like a Jewish manicurist and I hate you". [cite book | last=Bradford | first=Sarah |title=Elizabeth | publisher=William Heinemann | location=London |year=1996 ] When high society palled, Snowdon would escape to a hideaway cottage with his lovers, or on overseas photographic assignments; most people, including the Royal Family, took his side.

Princess Margaret was equally promiscuous. Insecure in the shadow of her sister the Queen, she would point out her husband's less-than-royal origins, once correcting publicly his use of the "non-U" word "material" (as in cloth) for what U-speakers offhandedly called "stuff".

The marriage ended in divorce in 1978, when briefly entered Princess Margaret's life and Snowdon played the outraged husband.

After his divorce from Princess Margaret, Lord Snowdon married Lucy Lindsay-Hogg, daughter of and former wife of film director , on . Their only child, , was born seven months later, on . They divorced in upon the revelation that the 68-year-old Lord Snowdon had fathered a son out of wedlock, Jasper William Oliver Cable-Alexander (born ), with , an editor at "Country Life" magazine.

On Lord Snowdon was created Baron Armstrong-Jones, of Nymans in the County of West Sussex. This was a age given him so that he could keep his seat in the after the hereditary peers had been excluded. An offer of a life peerage was made to all hereditary peers of the first creation ("i.e.", those for whom a peerage was originally created, as opposed to those who inherited a peerage from an ancestor) at that time.