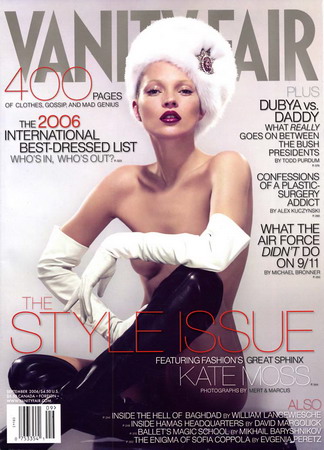 "Vanity Fair" is an American magazine of , , and published by .

Condé Nast began his empire by purchasing the men's fashion magazine "Dress" in 1913. He is said to have paid $3,000 for the right to use the title "Vanity Fair" in the United States, but it is unknown whether the right was granted by an earlier English publication or some other source.

Condé Nast renamed the magazine "Dress and Vanity Fair" and published four issues in 1913. After a short period of inactivity it was relaunched in 1914 as "Vanity Fair".

The magazine achieved great popularity under editor . In 1919 was tapped to become managing editor. He joined , who had come to the magazine from "Vogue", and was the staff drama critic. Benchley hired future playwright , who had recently returned from . The trio were among the original members of the , which met at the , on the same West 44th Street block as Condé Nast's offices.

Starting in 1925 "Vanity Fair" competed with "" as the American establishment's top culture chronicle. It contained writing by , and , theatre criticisms by Dorothy Parker, and photographs by ; was its editor for some time.

Condé Nast Publications, under the ownership of , announced in June 1981 that it was reviving the magazine. ["Conde Nast to Revive Vanity Fair Magazine", "Wall Street Journal", July 1, 1981, p. 16.] The first issue was published in February 1983 (cover date March), edited by Richard Locke, formerly of "". [Sandra Salmans, "Covering the Elite at Condé Nast", "New York Times", February 6, 1983, p. F1.] After three issues, Locke was replaced by , veteran features editor of "Vogue". [Curt Suplee, "Vanity Fair Editor Fired", "The Washington Post", April 27, 1983, p. B4.] He was followed by editors (1984–1992) and (since 1992). Regular include , Michael Wolff, , , and . Famous contributing photographers for the magazine include Bruce Weber, , and the late , all who have provided the magazine with a string of lavish covers and full-page portraits of current . Amongst the most famous of these was the August 1991 cover featuring a naked, pregnant , an image entitled "" that to this day holds a spot in pop culture.

In addition to its controversial photography, the magazine is also known for its high quality articles. In 1996, journalist Marie Brenner wrote an exposé on the entitled "The Man Who Knew Too Much". The article was later adapted into a movie "The Insider" (1999), which starred and . Most famously, after more than thirty years of mystery, an article in the May 2005 edition revealed the identity of Deep Throat (), one of the sources for "" articles on Watergate, which led to the 1974 resignation of U.S. President . The magazine also includes candid interviews from celebrities: from admitting to being abused as a child to 's first interview after her divorce from . talked about his brother's death while gave an exclusive to the magazine right after her release from prison.

In August 2006, "Vanity Fair" sent photographer Annie Leibovitz to the home of and for its October 2006 issue. The photo shoot was of the couple and their daughter, Suri Cruise, who had previously been "hidden", without pictures released to the public, causing many to start to deny her existence. This issue became the second highest selling issue for the magazine; the first was the Jennifer Aniston cover after her divorce.

In keeping with the influence of Hollywood and pop culture on the magazine, "Vanity Fair" hosts a high-profile, exclusive after-party at the restaurant Morton's. In addition, its annual Hollywood issue usually consists of pictorials of that year's respective nominees. Previous Hollywood issue covers have included group images of , , and together and , , , and together.

The magazine was the subject of 's book, "How to Lose Friends and Alienate People", about his search for success, from 1995, in working for Graydon Carter's "Vanity Fair". The book has been made into a movie, with playing Carter.

There are currently four international editions of "Vanity Fair" being published, namely in the , , and . The latter two editions are published weekly.

Some of the pictorials in "Vanity Fair" have garnered criticism. The April 1999 issue featured an image of actor Mike Myers dressed as a deity for a photo spread by : after criticism, both the photographer and the magazine apologized. [ [http://www.saja.org/vf.html SAJA Vanity Fair article] , 9 June, 2000 ]

Another issue whose cover image courted controversy was the March 2006 's Special Edition: the cover, shot by Annie Leibovitz, featured and , both nude, accompanied by a fully-clothed , a last-minute replacement for , who had backed out of the shoot after refusing to appear nude.

In addition, the December, 2006 issue (Vanity Fair's first "Art Issue") drew controversy with its photo of Brad Pitt wearing nothing but a pair of white boxers. Although Pitt had signed a release for the image, which was taken in September 2005, he claims he did not expect it to emerge on the magazine cover more than a year later. Vanity Fair has said that it obtained the rights for the image, as part of a collection, and that it had issued a letter to Pitt informing him, prior to the publication.

On , , the televised entertainment program "" reported that 15 year old had posed for a photo shoot with Vanity Fair. [cite web|url=http://www.news.com.au/dailytelegraph/story/0,22049,23608789-5001026,00.html|title=Miley Cyrus topless controversy|date=2008-04-28|accessdate=2008-04-27|publisher=news.com.au/dailytelegraph/] The photo, and subsequently released behind-the-scenes photos, show Cyrus without a top, her bare back exposed but her front covered with a bedsheet. The photo shoot was taken by photographer . [cite web|url=http://www.people.com/people/article/0,,20195785,00.html|title=Miley Cyrus: I'm Sorry for Photos|author=Stephen M. Silverman|date=2008-04-27|accessdate=2008-04-27|publisher=people.com] The full photograph was published with an accompanying story on ""' website on , . On , "The New York Times" clarified that though the pictures left an impression that she was bare-breasted, Cyrus was wrapped in a bedsheet and was actually not topless.

In response to the internet circulation of the photo and ensuing media attention, Cyrus released a statement of apology on :

"I took part in a photo shoot that was supposed to be ‘artistic’ and now, seeing the photographs and reading the story, I feel so embarrassed. I never intended for any of this to happen and I apologize to my fans who I care so deeply about."

In 2005, "Vanity Fair" was found liable in a brought in the UK by film director , who claimed the magazine had led him in an article published in 2002, accusing him of boorish behavior and child molestation following the murder of his wife in 1969. A 2002 article in the magazine written by recounted a claim by , editor of "", that Polański had made sexual advances towards a young model as he was travelling to Sharon Tate's funeral, claiming that he could make her "the next Sharon Tate". The court permitted Polański to testify via a video link, after he expressed fears that he might be extradited were he to enter the United Kingdom. [ [http://news.bbc.co.uk/2/hi/entertainment/4019031.stm Polanski takes appeal to Lords] (online), 17 November, 2004 ] The trial started on , 2005, and Polański made English legal history as the first claimant to give evidence by video link. During the trial, which included the testimonies of and others, it was proved that the alleged scene at the famous New York restaurant Elaine's could not possibly have taken place on the date given, because Polański only dined at this restaurant three weeks later. Also, the Norwegian then-model disputed the accounts that he had claimed to be able to make her "the next Sharon Tate".

Polański was awarded £50,000 damages by the High Court in London. The case was notable because Polanski was living in France as a fugitive from U.S. justice, and never appeared in the London court for fear he would be extradited to the U.S. and Graydon Carter, editor of "Vanity Fair", responded, "I find it amazing that a man who lives in France can sue a magazine that is published in America in a British courtroom," while Samantha Geimer commented, "Surely a man like this hasn't got a reputation to tarnish?" [ [http://www.vanityfair.com/commentary/content/printables/050919roco02?print=true How I spent my summer vacation in London being sued by Roman Polanski — and what I learned about "solicitors," pub food, and the British chattering class] , by Graydon Carter, "Vanity Fair", 19 September, 2005 ]

In January 2006, "Vanity Fair" published a cover feature and an interview with in which she admitted using drugs "a little", although she denied ever using cocaine, describing it as a "sore subject". The article said she had recovered from "bulimic episodes", and that her 2005 hospitalization was for "a swollen liver and kidney infection".