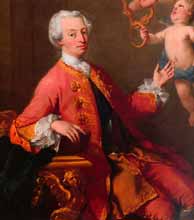 
The Prince Frederick, Prince of Wales (Frederick Louis; &ndash; ) was a member of the Hanoverian and , the eldest son of George II and father of George III. He was born into the and, under the Act of Settlement passed by the in 1701, Frederick was in the direct . He moved to Great Britain following the accession of his father, and became the . He predeceased his father however, and the throne, upon the death of George II on , passed to Prince Frederick's eldest son, George, Prince of Wales, who reigned as King George III from 1760 until 1820.

Frederick served as the tenth Chancellor of Trinity College, Dublin, from 1728 to 1751.

Prince Frederick had a hostile relationship with his parents. [Thomson: "Odd Men In", p. 16.]

Prince Frederick Louis (slightly-less commonlyFact|date=August 2008 rendered Lewis [ [http://www.londongazette.co.uk/ViewPDF.aspx?pdf=5501 The London Gazette for Frederick's knighthood] ] ), the grandson of the then Elector of Hanover (later George I) and , was born in , as Duke Friedrich Ludwig of Hanover. His godparents were his grandfather The Elector and his great-uncle The King in Prussia [ [http://users.uniserve.com/~canyon/christenings.htm#Christenings Yvonne's Royalty Home Page: Royal Christenings] ] . His parents, Prince George (later George II) and Princess , were called upon to leave the country when their eldest son was only seven years old, and they did not see him again until he arrived in in 1728 as a grown man. By then, they had several younger children, and they rejected Frederick both as their son and as a person, referring to him as a "foundling" and nicknaming him "Griff", short for the mythical beast known as a .

The motives for the ill-feeling between Frederick and his parents may include the fact that he had been set up by his grandfather, even as a small child, as the representative of the house of Hanover, and was used to presiding over official occasions in the absence of his parents. He was not permitted to go to Great Britain until his father took the throne as George II on . In fact, Frederick continued to be known as Prince Friedrich Ludwig of Hanover (with his British HRH style) even after his father had been created Prince of Wales. Frederick was created Prince of Wales on .

He had a will of his own and sponsored a court of ‘opposition’ politicians at his residence, . Frederick and his group supported the Opera of the Nobility in as a rival to Handel's royally-sponsored opera at the King’s Theatre in Drury Lane. Frederick was a genuine lover of music who played the cello; he is depicted as a cellist in an oil portrait by of Frederick and his sisters, now part of the National Portrait Gallery collection [http://www.npg.org.uk/live/search/person.asp?LinkID=mp07308&role=art] . He enjoyed the natural sciences and the arts, and became a thorn in the side of his parents, thwarting their every ambition and making a point of opposing them in everything, according to the court gossip Lord Hervey. At court, the favourite was Frederick's younger brother, , to the extent that the king looked into ways of passing over Frederick in the succession.

A permanent result of Frederick's patronage of the arts is "", one of the best-known British songs. It was written by the Scottish and playwright James Thomson as part of the "Alfred" which was first performed in 1745 at , the country home of the Prince and Princess of Wales.

A masque linking the Prince with both the ancient hero-king 's victories over the and with the contemporary issue of building up the British obviously went well with Frederick's political plans and aspirations.

Later the words, set to music by - another of Frederick's favorite artists - got a permanent life of his own regardless of the masque. Thomson, who supported the Prince of Wales politically, also dedicated to him an earlier major work, "Liberty" (1734).

Patron of the arts

Unlike the king, Frederick was a knowledgeable amateur of painting, who patronized immigrant artists like Amigoni ("illustration above right") and , who painted the portraits of the prince and his consort for Frederick's champion . The list of other artists he employed&mdash;, , Phillips and the French engraver &mdash;represents some of the principal figures of the English . 's neo-Palladian state barge of 1732 is still preserved, though Sir William Chambers' palace at Kew for his widow Augusta (1757) was demolished in 1802.

Quickly accumulating large debts, Frederick relied for an income on his wealthy friend, . The Prince's father refused to make him the financial allowance that the Prince considered should have been his, and Parliament was obliged to intervene, resulting in further bad feeling between the two.

Although in his youth he was undoubtedly a spendthrift and womaniser, Frederick settled down, on his marriage, in 1736, to the sixteen-year-old , and soon became a devoted family man, taking his wife and eight children (his youngest daughter was born posthumously) to live in the countryside at , since he was effectively banished from court.

By the time Frederick arrived in Great Britain, cricket had developed into the country's most popular team sport and it thrived on gambling. Perhaps because he wished to "anglicise" and so fit in with his new society, Frederick developed an academic interest in cricket that soon became a genuine enthusiasm. He began to make wagers and then to patronise and play the sport, even forming his own team on several occasions.

The earliest mention of Frederick in cricket annals is in a contemporary report that concerns a major match on Tuesday 1731 between Surrey and London, played on . No post-match report was found despite advance promotion as "likely to be the best performance of this kind that has been seen for some time". It is interesting that "for the convenience of the gamesters, the ground is to be staked and roped out" which was a new practice in 1731 and could have been done partly for the benefit of a royal visitor. The advertisement refers to "the whole county of Surrey" as London’s opponents and states that the Prince of Wales is "expected to attend"

By the 1733 season, he was really getting involved. We read of him giving a guinea to each player in a Surrey v Middlesex game at

In the years following 1733, there are frequent references to the Prince of Wales as a patron of cricket and as an occasional player, though it is doubtful if he was actually any good as a player.

When he died on 31 March 1751, cricket suffered a double impact for his death closely followed that of , who was the game's greatest patron. The loss of these patrons had an adverse impact on the game’s finances and the number of top-class matches reduced for some years to come, although economic difficulties arising from the wars of the period certainly inhibited many potential investors

It has frequently been said that the Prince of Wales died as a result of being struck on the head by a cricket ball. He may well have been hit on the head but that did not kill him; the cause of death was a burst abscess in a lung. Cricket has had its share of fatalities in its time, but Prince Frederick Louis was not one of them.

His political ambitions remained unfulfilled, because he died prematurely at the age of forty-four. The cause of death has been commonly attributed to an abscess created by a blow by a or a tennis ball, but a burst in the was given as the cause of death. [Deborah Fisher, "Princes of Wales" (University of Wales Press, 2006)] Frederick died at Leicester House in and he was buried at .

Between his creation as Duke of Edinburgh in 1726 and his creation as Prince of Wales, he bore the arms of the kingdom, differenced by a "label argent of three points, the centre point bearing a cross gules". As Prince of Wales, the difference changed to simply a "label argent of three points". [ [http://www.heraldica.org/topics/britain/cadency.htm Marks of Cadency in the British Royal Family] ]