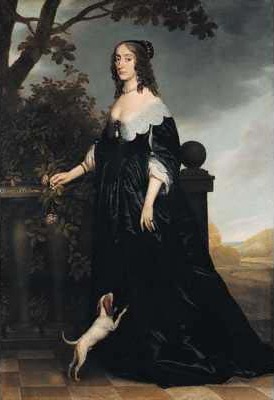 Elisabeth, Electress Palatine and Queen of Bohemia (born Princess Elizabeth Stuart of Scotland; &ndash; ) was the eldest daughter of James VI of Scots, I of England and Ireland and his . She was thus sister to and cousin to . With the demise of the in 1714, her direct descendants, the Hanoverian rulers, succeeded to the .

At the time of Elizabeth's birth at , , her father was still the King of Scots only. She was named in honour of the Queen of England, in an attempt by her father to flatter the old queen, whose kingdom he hoped to inherit. When the younger Elizabeth was six years old, in 1603, Elizabeth I died and James succeeded to the thrones of and , making his daughter a much more attractive bride.

Part of the intent of the of 1605 was to put the nine year old Elizabeth onto the throne of England (and, presumably, Scotland) as a monarch, after assassinating her father and the English aristocracy. At the time of the plot she was staying at in , from where the conspirators planned to kidnap her.

On , she married Frederick V, then Elector of the Palatinate, and took up her place in the court at . Frederick was the leader of the association of Protestant princes in the known as the Evangelical Union, and Elizabeth was married to him in an effort to increase James's ties to these princes. In 1619, Frederick was offered and accepted the crown of , but his rule was extremely brief, and thus Elizabeth became known as the "Winter Queen." She was also sometimes called "Queen of Hearts" because of her popularity.

Driven into exile, the couple took up residence in , and Frederick died in 1632. Elizabeth remained in Holland even after her son, Charles I Louis, regained his father's electorship in 1648. Following the Restoration of the English & Scottish monarchies, she travelled to to visit her nephew, Charles II, and died while there. Her youngest daughter was known later as ; pursuant to the English , the Electress Sophia and her issue were made heirs to the English, Scottish and Irish thrones (later British throne), so that all monarchs of Great Britain from George I are descendants of Elizabeth.

Cape Elizabeth, a peninsula and today a town in the of was named in honor of Elizabeth. John Smith explored and mapped New England and gave names to places mainly based on the names used by Native Americans. When Smith presented his map to Charles I he suggested that the king should feel free to change the "barbarous names" for "English" ones. The king made many such changes, but only four survive today, one of which is Cape Elizabeth. [cite book |last= Stewart |first= George R. |authorlink= George R. Stewart |title= Names on the Land: A Historical Account of Place-Naming in the United States |origyear= 1945 |edition= Sentry edition (3rd) |year= 1967 |publisher= |page= p. 38]

In WG Sebald's novel "Vertigo" (1990), a woman appears whom the narrator, travelling through Heidelberg by train in 1987, recognizes instantly "without a shadow of a doubt" as Elizabeth when she enters his carriage.

The Winter Queen also plays a seminal role in Neal Stephenson's the Baroque Cycle by giving birth to many children.http://en.wikipedia.org/wiki/The_Baroque_Cycle