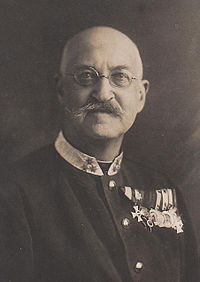 HRH Prince Ernest Augustus, the last person to hold the title, was deprived thereof in 1919

Duke of Cumberland is a peerage title that was conferred upon junior members of the British Royal Family, named after the county of Cumberland.

The first creation, in the Peerage of England, was in 1644 for Prince Rupert of the Rhine, nephew of King Charles I. When he died without heirs, the title was created again in the Peerage of England in 1689 for Prince George of Denmark, husband of Princess Anne, younger daughter of King James II. He also died without heirs, in 1708. Neither of these men, however, was usually known by their peerage title.

The third creation, in the Peerage of Great Britain, was for Prince William, the third son of King George II. Other titles granted to Prince William were Marquess of Berkhampstead, Earl of Kennington, Viscount Trematon and Baron Alderney. Since the Prince died unmarried and without children, his titles became extinct at his death.

The title was created again in the Peerage of Great Britain, but the form being changed to "Cumberland and Strathearn". The dukedom and also the Earldom of Dublin in the Peerage of Ireland were bestowed on Prince Henry, the third son of Frederick, Prince of Wales, and grandson of King George II. Since Prince Henry died without legitimate children, the title became extinct again.

The last creation (the form being "Duke of Cumberland and Teviotdale") was for Ernest Augustus (later King of Hanover), fifth son of King George III of the United Kingdom. The title was suspended for the third Duke's pro-German activities during World War I under the 1917 Titles Deprivation Act, as it was for his son. Under the Act the lineal male heirs of the 3rd Duke of Cumberland and Teviotdale have the right to petition the British Crown for the restoration of his peerages. To date, none has done so. The present heir is Prince Ernst August of Hanover (born 26 February 1954), great grandson of the 3rd Duke and current head of the House of Hanover. He is the senior male-line descendant of George III of the United Kingdom.

Dukes of Cumberland and Strathearn (1766)

Dukes of Cumberland and Teviotdale (1799)

Heirs to the Dukedom, if restored