Napier was the son of Major Charles Frederick Napier, who was wounded at the storming of Meester Cornelis (now Jatinegara) in Java on (26 August 1810) and died some months later. Robert was born in Ceylon on 6 December 1810.[1]

He was educated at Addiscombe Military Academy from which he joined the Bengal Engineers at the age of 18, arriving in India in November 1828.[1]

Napier was employed in the irrigation works of the Public Works Department for some years, before being promoted to Captain in January 1841, when he was appointed to Sirhind.[1]

In December 1845 he joined the Army of the Sutlej and commanded the Bengal Engineers at the Battle of Mudki. He was severely wounded at the battle of Ferozeshah on 31 December 1845 while storming the Sikh camp. He was also present at the battle of Sobraon on 10 February 1846 and in the advance on Lahore. He was mentioned in despatches for his services and received a brevet majority.[1]

In May 1846 he was chief engineer at the reduction of the fortress of Kote Kangra in the Punjab by Brigadier-General Wheeler, for which he received the thanks of the government.[1]

Having been appointed as consulting engineer to the Punjab resident and Council of Regency, in 1848 Napier was again called into action, to direct the siege of Multan. In September 1848 he was wounded in the attack, but managed to be present at the successful storming of Multan on 23 January 1849 and the surrender of the fortress of Chiniot.[1]

Joining Sir Hugh Gough, Napier then took part in the battle of Gujrat in February 1849, accompanied Sir Walter Gilbert as he pursued the Sikhs, and was present at the passage of the Jhelum, and the surrender of the Sikh army. For his services he was mentioned in despatches and received a brevet lieutenant-colonelcy. At the close of the war he was appointed civil engineer to the Board of Administration of the annexed province of Punjab, and carried out many significant public works during his time in that position.[1]

In December 1852 Napier took command of a column in the first Hazara expedition, and in the following year against the Baris on the North-West frontier. For his services he was again mentioned in despatches, and received the special thanks of the government and a brevet-colonelcy.[1]

Napier was appointed military secretary and adjutant-general to Sir James Outram, whose forces took part in the actions leading to the first relief of Lucknow on 25 September 1857. He then took charge of Lucknow's defence until the second relief, when he was badly wounded while crossing an exposed space with Outram and Sir Henry Havelock to meet with Sir Colin Campbell.[1]

After the fall of Lucknow, Napier was mentioned in despatches and made CB. He then joined Sir Hugh Rose as second-in-command in the march on Gwalior, and commanded the 2nd Brigade at the battle of Morar on 16 June 1858. After Gwalior fell, he and his 700 men pursued, caught and completely defeated Tantya Tope and 12,000 men on the plains of Jaora Alipur.[1]

After Sir Hugh Rose's departure, Napier assumed command of the Gwalior division. He captured Paori in August, routed Prince Ferozeshah at Ranode in December, and in January 1859 succeeded in securing the surrender of Man Singh and Tatya Tope, ending the war. For his services Napier received the thanks of parliament and of the Indian government, and was made GCB.[1]

In January 1860 during the Second Anglo-Chinese War, Napier assumed command of the 2nd division of the expeditionary force under Sir James Hope Grant. Napier took part in the action at Sinho, the storming of the Taku (Peiho) Forts, and the entry to Peking. For his services he received the thanks of parliament, and was promoted major-general for distinguished service in the field.[1]

Napier was a military member of the Governor-General of India's council until 1865, acting for a short while as Governor-General after the sudden death of Lord Elgin. In January 1865 he assumed command of the Bombay Army. In March 1867 he received promotion to lieutenant-general and later that year took command of the punitive expedition to Abyssinia.[1] 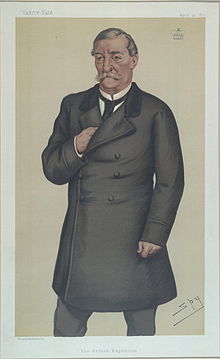 "The British Expedition". Caricature by Spy published in Vanity Fair in 1878.

He achieved his greatest fame as an army officer when he led the expedition of 1868 against Emperor Tewodros II of Ethiopia. The Ethiopian ruler was holding a number of Protestant missionaries hostage, in his mountain capital of Magdala, as well as two British diplomats who had unsuccessfully attempted to free them. After months of planning and other preparations, the advance guard of engineers landed at Zula on the Red Sea to construct a port on 30 October 1867; Napier himself arrived in Zula on 2 January 1868, and on 25 January led his troops south in the Ethiopian highlands.[1]

The expedition involved crossing 400 miles (644 km) of mountainous terrain lacking roads or bridges occupied by local people with a known history of hostility towards outsiders. The expedition overcame the first obstacle, the terrain, by thorough logistical planning and engineering ability. Shrewd diplomacy dealt with the second obstacle, local opposition. On the one hand, Napier made it clear to the Ethiopians that the sole intent of the British force was to rescue the imprisoned Europeans—not conquest; on the other, Napier met with local potentates such as Ras Kassa (the future Emperor Yohannes IV), and arranged to purchase needed supplies with the 4.35 million Maria Theresa Thalers (the preferred currency of the area) the British had purchased from the mint in Vienna. What helped Napier was the general disaffection with, if not hostility to, Tewodros.[2]

Napier's troops reached the foot of Magdala on 9 April and the next day, Good Friday, where they defeated the 9,000 troops still loyal to Tewodros at the Battle of Magdala for the loss of only 2 British lives. Although Emperor Tewodros surrendered his hostages and made repeated efforts for a negotiated surrender, Napier pressed on and ordered an assault on the mountain redoubt 13 April. The British captured Magdala, and Emperor Tewodros took his own life, preferring to "fall into the hands of God, rather than man."[3] Napier then ordered the destruction of Tewodros' artillery and the burning of Magdala. The expedition and its troops looted many historical and religious artifacts, which they took back to Britain. The looted artifacts still reside in collections in the UK, despite representations by various parties for their return.[4][5]

After the Ethiopian campaign, Napier received many honors. The Royal Society of London for the Improvement of Natural Knowledge inducted him as a member in 1869.[6] He received a parliamentary pension, was made Grand Commander of the Order of the Bath and a Freeman of the City of London and by way of victory title was given a hereditary peerage, Baron Napier of Magdala.[1]

Napier became Commander-in-Chief in India (1870–1876), being promoted to general in 1874. From 1876 to 1883 he served as Governor of Gibraltar. In 1877, during a tense period in European politics, he was appointed commander-in-chief of a proposed force which was to be dispatched to Constantinople.[1]

In 1879 he was a member of the Royal Commission on the organization of the army, and in November of the same year represented Queen Victoria at Madrid as ambassador extraordinary upon the occasion of Alfonso XII of Spain's second marriage.[1]

On 1 January 1883 Napier was promoted to Field Marshal, and in January 1887 appointed Constable of the Tower of London.[1]

He died in London on 14 January 1890, receiving a state funeral and being buried in St. Paul's Cathedral. His eldest son, Robert William Napier (born 1845) succeeded to his barony.[1]

Robert Napier Secondary School in Gillingham Kent (UK) is named in his honour.