The islands in the group have been declared Special Nature Reserves under the South African Environmental Management: Protected Areas Act, No. 57 of 2003, and activities on the islands are therefore restricted to research and conservation management.[1][2] The only human inhabitants of the islands are the staff of a meteorological and biological research station run by the South African National Antarctic Programme on Marion Island. 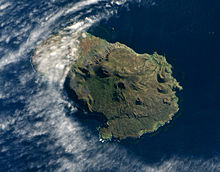 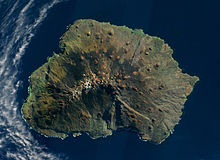 Both islands are of volcanic origin. Marion Island is one of the peaks of a large underwater shield volcano that rises some 5,000 metres (16,404 ft) from the sea floor to the top of Mascarin Peak. The volcano is active, with eruptions having occurred between 1980 and 2004.[3]

The islands lie directly in the path of eastward-moving depressions all year round and this gives them an unusually cool and windy climate. Strong winds blow almost every day of the year and the prevailing wind direction is north-westerly. Annual rainfall averages from 2,400 mm (94.5 in) up to over 3,000 mm (118.1 in) on Mascarin Peak. It rains on average about 320 days a year (about 28 days a month) and the islands are among the cloudiest places in the world – about 1300 hours a year on the sheltered eastern side of Marion island but falling to around 800 hours away from the coast and on the wet western sides of Marion and Prince Edward Island. Summer and winter have fairly similar climates with cold winds and threat of snow or frost at any time of the year. However, the mean temperature in February (midsummer) is 8.3 °C (46.9 °F) and in August (midwinter) it is 3.9 °C (39.0 °F).[4][5]

The islands are part of the Southern Indian Ocean Islands tundra ecoregion that includes several subantarctic islands. In this cold climate, plant life is mainly limited to grasses, mosses and lichens, while the main indigenous animals are insects along with large populations of seabirds, seals and penguins.[6] The waters surrounding the islands are often frequented by several species of whale, especially orcas which prey on penguins and seals.

The wildlife is particularly vulnerable to introduced species and one particular problem has been cats. In 1949, five domestic cats were brought to Marion Island to deal with a mouse problem in the station. The cats multiplied quickly, and by 1977 there were approximately 3,400 cats on the island, feeding on burrowing petrels instead of mice, threatening to drive the birds to extinction on the island. Some species of petrels became extinct on Marion Island, and a "cat eradication program" was established. A few cats were infected with the highly specific feline panleukopenia virus, which reduced the cat population to about 600 by 1982.[7] The remaining cats were killed by nocturnal shooting, and in 1991 only eight cats were trapped in a 12 month period. It is believed that no cats remain on Marion Island today.

Prince Edward, after whom the islands are named

The islands were discovered in 1663 by the Dutch ship Maerseveen and were named Dina (Prince Edward) and Maerseveen (Marion).[8] In 1772, Marc-Joseph Marion du Fresne visited the islands[9] and spent five days trying to land, thinking he had found Antarctica (then not yet proven to exist). In 1776, his expedition, now headed by his second-in-command, Jules Crozet, after the death of du Fresne, met James Cook in Cape Town. Cook subsequently set sail for the islands, but was unable to attempt a landing due to bad weather conditions. Cook named[10][9] the smaller island after Prince Edward, the fourth son of King George III, and to the larger gave the name of Marc-Joseph Marion du Fresne.[citation needed]

The first recorded landing was in 1803 and was made by a group of seal hunters. These sealers, however, found signs of earlier human occupation, probably other sealers.[citation needed] James Clark Ross also visited the islands in 1840 but was also unable to land. Finally, the islands were surveyed by Captain George Nares in 1873.[citation needed]

In 1908, the British government, assuming ownership of the islands, granted William Newton the rights to exploit guano deposits for the next twenty-one years. Also in 1908, shipwrecked hunters established a village at the north coast, called Fairbairn Settlement.[citation needed] A ten-year grant for seal exploitation was issued by the British to a sealing company in 1926.

In late 1947 and early 1948, South Africa, with Britain's agreement, annexed the islands and installed the meteorological station on Transvaal Cove on the north-east coast of Marion Island. The research station was soon enlarged and today researches the biology of the islands, in particular the birds (penguins, petrels, albatrosses, gulls) and seals. Today, the research station is called RSA Marion Station.[11]

On September 22, 1979, one of the US Vela spy satellites recorded an activity near the Prince Edward Islands, which was initially interpreted as the "double flash" of a small nuclear test. The event is still controversial and is known as the Vela Incident.

Marion Island and Prince Edward Island were claimed for South Africa by a South African Navy force from the HMSAS Transvaal on 29 December 1947 and 4 January 1948 respectively. On 1 October 1948 the annexation was made official when Governor-General Gideon Brand van Zyl signed the Prince Edward Islands Act, 1948. Because the United Kingdom relinquished its claims on the islands to South Africa, no other nation has made a claim on the islands, and they have been occupied continuously since 1948 by South Africa, the status of the islands is not in dispute.

In terms of the Act, the islands fall under the jurisdiction of the Cape Town Magistrate's Court, and South African law as applied in the Western Cape applies on them. The islands are also deemed to be situated within the electoral district containing the Port of Cape Town; as of 2006[update] this is ward 55 of the City of Cape Town.

As of 2009 Marion Island, prefix ZS8, was the third most wanted DXCC "entity" by the amateur radio community. It was hoped that a new radio operator at the meteorological station would meet some of this demand.[12]

Prince Edward Island features as the setting for the climax of the maritime adventure story "Southtrap" by Geoffrey Jenkins.