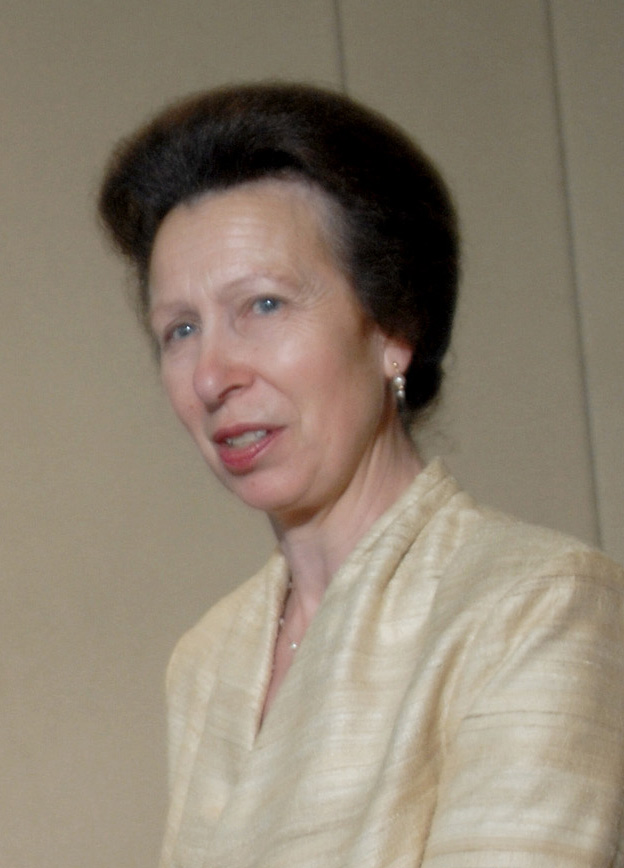 The Princess Anne, Princess Royal (Anne Elizabeth Alice Louise; born 15 August 1950) is a member of the and the only daughter of Elizabeth II. She is the seventh holder of the title , and is currently tenth in the . At the time of her birth, she was third in line, but moved to second place when her mother became Queen, until the birth of her brother, The Prince Andrew, in 1960.

The Princess Royal is known for her charitable work, and is the only member of the British Royal Family to have competed in the .

Princess Anne Elizabeth Alice Louise was born on 15 August 1950 at , . Her father is , the son of Prince Andrew of Greece and Denmark and the former . Her mother is Queen Elizabeth II, Queen of the United Kingdom, the elder daughter of King George VI and Queen Elizabeth, The Queen Mother.

She was baptised in the Music Room of on 21 October 1950 by , . Her godparents were: The Earl Mountbatten of Burma, , Queen Elizabeth, The Queen Mother, Princess Andrew of Greece and Denmark and The Princess of Hohenlohe-Langenburg.

Shortly before the birth of her elder brother, Prince Charles, in 1948, their grandfather King George VI issued granting the titular dignity of "Prince or Princess of the United Kingdom of Great Britain and Northern Ireland" and the style "Royal Highness" to any children born to the Duke and Duchess of Edinburgh. Thus, from birth, Princess Anne was styled "Her Royal Highness" Princess Anne of Edinburgh. Had it not been for these letters patent she would have been known as 'Lady Anne Mountbatten' until her mother became Queen in 1952.

Princess Anne was educated in Buckingham Palace and then at , a public boarding school in .

On 6 February 1952, when Anne's grandfather, George VI, died, her mother ascended the throne as Elizabeth II. Anne was now styled "Her Royal Highness" The Princess Anne. Given her young age, she did not attend her mother's . Princess Anne began to undertake royal and official duties as a teenager in the late 1960s. She has visited many countries and towns.

Anne has always shown a keen interest in horses, and equine pursuits have been an important part of her life. At the age of 21, she won the individual title at the held at Burghley and was voted in 1971. Her daughter would win the same award 35 years later, on 10 December 2006. For over five years she competed with the British team, winning a silver medal in both individual and team disciplines in the 1975 s held in Germany riding the home-bred Doublet. The following year she participated in the 1976 Montreal Olympic Games as a member of the British team, riding the Queen's horse Goodwill. On 5 February 1987, she appeared as a panellist on the 200th edition of the BBC TV panel game "", becoming the first titled British royal to appear as a contestant on a TV quiz show.

In 1981, following the retirement of The Queen Mother, Anne was elected Chancellor of the , following an election by graduates of the university in which she was chosen above Jack Jones and .

In 1994, Princess Anne was created a Lady of the Garter by The Queen. She also received special dispensation to use the post-nominal "KG", rather than the normal female equivalent of "LG".

On 14 November 1973 Princess Anne married , a Lieutenant and later a Captain in the at , . The marriage was televised around the world with an estimated audience of 100 million. The couple has two children, both of whom, like their mother, were born on the 15th day of a month:
*Peter Phillips, born 15 November 1977
*, born 15 May 1981 As is customary, the Queen is believed to have offered Capt. Phillips an on his wedding day, which he turned down. This may also have been the specific wish of Princess Anne, who wanted to shield future children from the publicity that courtesy titles might bring. They thus became the first grandchildren of a sovereign to carry no title. However, they are not the first children of a British princess to carry no title. The children of , the Queen's cousin, who were born in the 1960s, are also untitled.

After their wedding, Princess Anne and Captain Mark Phillips lived at , in .

Princess Anne was the target of a failed kidnapping attempt on 20 March 1974. It remains the closest in modern times any individual has come to kidnapping a member of the British Royal Family.

The incident occurred as Princess Anne and Mark Phillips were returning to from a London charity event on Pall Mall. Their Austin Princess Limousine was forced to stop by a . [Daily Express, 21 August 2006] The driver of the Escort, Ian Ball (later judged to be mentally unstable) jumped from his car, firing a gun. Inspector James Beaton, the Princess's personal police officer, responded by jumping out to shield the Princess as he tried to disarm Ball. However, Beaton's firearm jammed, and he was also shot in the head and chest by the assailant. The car's chauffeur, Alex Callender

Ball later pleaded guilty to attempted murder and attempted kidnapping, and he was detained under the Mental Health Act. He was sent to the , where he remains. Ball planned to ransom the Princess for a sum given in various sources as £2 million [ [http://news.bbc.co.uk/2/hi/uk_news/4139187.stm Princess foiled 1974 kidnap plot] ] or £3 million to the NHS. [Daily Express, 21 August 2006] The incident prompted higher security levels for the Royal Family. Police officer Beaton was awarded the for his defence of the Princess Royal. Alex Callender, Brian McConnell, Ron Russell, PC Michael Hills, and DC Peter Edmonds were awarded the . [Daily Express, 21 August 2006]

In 2006 Granada Television produced a docu-drama entitled "To Kidnap a Princess" directed by John Alexander which related this incident.

The would-be kidnapper has placed bizarre advertisements [Private Eye Magazine, 5th September 2008] directing readers to [http://www.ianball.me.uk/ his Web site] , which offers £1 million to anyone who can prove his theory that the whole incident in fact took place a year later, and formed part of a long-standing and elaborate persecution of Ball by a policeman.

On 13 June 1987, the Queen bestowed the title of on Princess Anne, the seventh creation of this title. Anne was now to be styled Her Royal Highness The Princess Royal. The title is only given to the eldest daughter of the sovereign, the last holder being George V's daughter, Princess Mary, Countess of Harewood.

In 2007, the Princess Royal had the honour of being installed by The Queen as Grand Master of the , succeeding her late grandmother, Queen Elizabeth, The Queen Mother.

In August, 1989, the Princess Royal and Mark Phillips announced their intention to separate. The marriage had been under strain for many years. The couple divorced on 23 April 1992. [cite web |url=http://query.nytimes.com/gst/fullpage.html?res=9E0CE4DC133EF937A15757C0A964958260 |title= CHRONICLE |accessdate=2008-06-08 |author=Nadine Brozan |date=1992-04-24 |work= |publisher=The New York Times] On 12 December 1992, Anne remarriedmdash the first royal divorcée since to do so. She chose to remarry in the since the forbade divorced persons from remarrying in their churches.

She married in near the Balmoral Estate, Aberdeenshire. At the time of their marriage, he was a , and has since risen to the rank of . They have had no children together.

The Princess Royal carries out the most engagements of any member of the Royal Family. This current popularity is in contrast to her previous reputation when she earned the nickname "Princess Sourpuss".

The Princess Royal is involved with over 200 charities and organisations in an official capacity. The Princess Royal works extensively for the charity of which she has been president since 1970. was created on her initiative in 1991 - her work for the charity takes her all over the world, including many poverty stricken African nations. Also her extensive work for as Commandant-in-Chief of St. John Ambulance Cadets has helped to develop many young people as she annually attends the Grand Prior Award Reception. She is also a British representative in the as an administrator, and is a member of the .

The Princess Royal is also patron of the and attends most international games at Murrayfield. She is patron of the , the Charity of British and Irish rugby and of , which supports over 750,000 young people across the UK.

In 2001, the Princess Royal faced criminal court charges. She pleaded guilty to driving at 93 mph on a on her way to in . She was fined £400 by Magistrates' Court and had five points added to her driving licence. [cite news|title=Princess Anne fined for speeding|url=http://news.bbc.co.uk/1/hi/uk/1218009.stm|Publisher=BBC News|date= 2001-03-13|accessdate=2006-05-31|quote=She saw the police car and believed it was waiting to escort her on her journey.]

In 2002, the Princess Royal was convicted of a second offence under the . She pleaded guilty to the charge that her dog, Dotty, attacked two boys while she and her husband were taking her for a walk in . The Princess Royal was fined £500 by Magistrates' Court and ordered to give Dotty more training. [cite news|title=Princess Royal fined over dog attack|url=http://news.bbc.co.uk/2/hi/uk_news/2497531.stm|Publisher=BBC News|date= 2002-11-21|accessdate=2006-05-31|quote=Relatives of the two boys involved criticised the sentence, calling it 'neither moral nor just'.]

Like other senior royals, The Princess Royal holds a number of honorary appointments in the armed forces of several s. In 2002, she made history when she wore a uniform at the funeral of her grandmother, Queen Elizabeth, the Queen Mother. She was the first non-reigning woman, who was also royal, to wear military uniform at a funeral.

She is of the following regiments, corps, and branches: 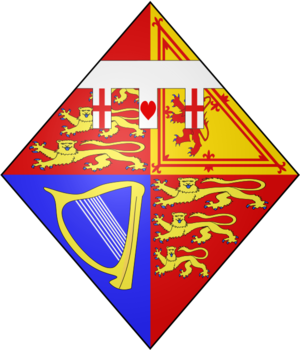 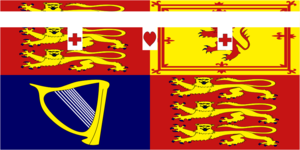 notes = The Princess' personalized coat of arms are those of the Royal coat of arms of the United Kingdom with a label for difference.
adopted =
crest =
torse =
helm =
escutcheon = Quarterly 1st and 4th gules three lions passant guardant or 2nd or a lion rampant gules within a double tressure flory counterflory gules 3rd azure a harp or stringed argent
supporters =
compartment =
motto =
orders =
other_elements = The whole differenced by a label of three points Argent, first and third charged with a St George's cross the second with a heart gules
banner = The princess' personal is that of the Sovereign, labelled for difference as in her arms.
badge =
symbolism = As with the Royal Arms of the United Kingdom. The first and fourth quarters are the arms of England, the second of Scotland, the fourth of Ireland.
previous_versions =