Coat of arms of England

Coat of arms of England 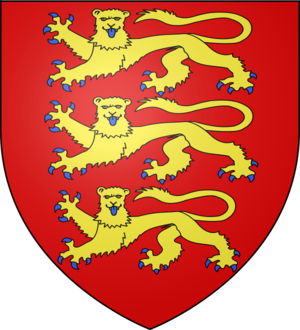 When King Richard I ("The Lionheart") came to the throne he first adopted his personal arms of two lions rampant on a red field, however by the end of his life he had adopted a shield with three lions passant, on a red field.

The origin of the third lion is unclear. [ [http://perso.numericable.fr/~earlyblazo/specialarms/richard.htm earlyBlazon.com - Richard the Lionheart] ] According to one tradition, the extra lion was added to two existing Norman lions to represent the combined realm. According to another tradition the two leopards were combined with the single leopard of , as Henry II, the first king, had acquired the duchy of Acquitaine by marriage before inheriting the throne of England. Other heraldic authorities have claimed that at an early stage in the development of the number of Norman lions was not fixed and that it is simply a matter of design as to why England has ended up with three heraldic lions and Normandy with two.

In 1340, King Edward III laid claim to the throne of France and quartered the English arms with those of , the "France Ancient", a blue shield with a tight pattern of small golden of the French royal house.

When Richard II came to the throne in 1377, he decided to marshall the coat of arms of England side by side with the of .

In 1406, the French quarterings were updated to the modern French arms, three fleurs-de-lis on a blue field.

During Mary I's reign, the arms of England were sometimes impaled (placed side to side with) with the arms of her husband, King .

During the (1649-60), a new non-royal coat of arms was created, replacing the three lions with the cross of St. George and the lion rampant of Scotland with the St. Andrew's cross. It also incorporated the Irish Harp and an escutcheon featuring a white lion from 's personal coat of arms. [ [http://flagspot.net/flags/gb-inter.html#coa United Kingdom: Flags of the Interregnum, 1649-1660] ]

The French arms were dropped from the royal arms of the United Kingdom in 1801 when King George III renounced the claim to the French throne. From that point, the heraldic representation of England reverted to the version used between 1198 and 1340, three golden lions on a red field.

The arms of England are not used in any official capacity on their own, although they do feature in the first and fourth quarters of the and the first quarter of the .

The arms of both the Football Association [ [http://www.englandfootballonline.com/TeamHist/HistThreeLions.html England Football Online - The Three Lions] ] and the [ [http://www.ecb.co.uk/ England Wales Cricket Board] ] are based on the three lions design. In recent years, it has been common to see banners of the arms flown at English football matches, in the same way the Lion Rampant is flown in Scotland.

In 1996, "" was the official song of the England football team for the , which was held in England.

Use in other arms

The spread of the has led to incorporation of the royal arms of England, or elements thereof, in the coats of arms of many other countries and territories.

French was the language of English government for a few centuries after the Norman Conquest of 1066, and in French a "lion", without further description, is always rampant; a lion passant guardant – one that is walking forward and facing outward toward the viewer – is always called a "léopard". A lion rampant guardant is a "léopard lionné", and one passant but with its head in profile is a "lion léopardé". The terms describe the animal's posture, not his species. Whatever the beast is called, the heraldic lion or leopard should always have at least a hint of a .