Catherine, Duchess of Cambridge (Catherine Elizabeth; née Middleton; born 9 January 1982), is the wife of Prince William, Duke of Cambridge. Prince William is second in line to the thrones of the sixteen Commonwealth realms and, if he becomes king, she will become queen consort.[1] Catherine grew up in Chapel Row at Bucklebury, a village near Newbury, Berkshire, England.[2] She studied in Scotland at the University of St Andrews, where she met William in 2001.

They started a romantic relationship that continued until a break-up lasting for several months in 2007. However, they continued to be friends and rekindled their relationship later that year. Prior to the wedding, Middleton attended many high-profile royal events. Once their relationship became public, she received widespread media attention and there was much speculation that she and Prince William would eventually marry. Their engagement was announced on 16 November 2010, and they married on 29 April 2011 at Westminster Abbey.

Middleton was born at Royal Berkshire Hospital in Reading on 9 January 1982 and christened at St Andrew's Bradfield, Berkshire on 20 June 1982.[3][4]:32 She is the eldest of three children born to Carole (née Goldsmith), a former flight attendant and now part-owner of Party Pieces, a private company with an estimated worth of £30 million,[5] and Michael Middleton, who also worked as a flight attendant prior to becoming a flight dispatcher for British Airways, currently also an owner of Party Pieces. Her parents married on 21 June 1980, at the Parish Church of Dorney, Buckinghamshire,[6] and in 1987, founded Party Pieces, a mail order company that sells party supplies and decorations.[7][8] Her siblings are Philippa "Pippa" Charlotte[9][10] and James Middleton.[9][11] The family has complained about press harassment of Pippa and their mother since Middleton's engagement.[12]

Middleton's paternal family came from Leeds, West Riding of Yorkshire, and her great-grandmother Olivia was a member of the Lupton family, who were active for generations in Leeds in commercial and municipal work.[13] Her ancestors include the Revd Thomas Davis, a Church of England hymn-writer.[14][15][16][17] Carole Middleton's maternal family, the Harrisons, were working class labourers and miners from Sunderland and County Durham.[18]

Middleton's parents were based in Amman, Jordan, working for British Airways from May 1984, to September 1986, where she went to an English language nursery school,[19] before returning to their home in Berkshire.[20] After her return from Amman, Middleton was educated at St Andrew's School near the village of Pangbourne in Berkshire, then briefly at Downe House.[21] She continued her studies at Marlborough College, a co-educational independent boarding school in Wiltshire,[22] followed by the University of St Andrews in Fife, Scotland where she met Prince William. She graduated with an undergraduate MA (2:1 Hons) in the History of Art.[23]

In November 2006, Middleton accepted a position as an accessory buyer with the clothing chain Jigsaw.[24] She also worked part-time until January 2011 as a catalogue photographer, webpage designer and marketing officer for her parents' firm "Party Pieces". In 2008, it was reported that she had quit her job at Jigsaw to become a professional photographer, intending to take private classes with photographer Mario Testino, who had taken several well-known photographs of Diana, Princess of Wales and her sons.[25] Testino later denied that Middleton was going to be working for him.[26]

Catherine is admired for her fashion sense and has been placed on numerous "best dressed" lists.[27][28][29] She was selected by The Daily Telegraph as the "Most Promising Newcomer" in its 2006 list of style winners and losers.[30] Tatler placed her at number 8 on its yearly listing of the top ten style icons in 2007.[31] She was featured in People magazine's 2007 and 2010 best-dressed lists.[32] Middleton was named as one of Richard Blackwell's ten "Fabulous Fashion Independents" of 2007.[33] In June 2008, Style.com selected Middleton as its monthly beauty icon.[34] In July 2008, Middleton was included in Vanity Fair's international best-dressed list.[35] In February 2011, she was named the Top Fashion Buzzword of the 2011 season by the Global Language Monitor.[36]

Middleton's status as the undeclared girlfriend of Prince William brought her widespread media coverage in Britain and abroad and she was often photographed on her daily outings. On 17 October 2005, she complained through her lawyer about harassment from the media, stating that she had done nothing significant to warrant such publicity.[37] In February 2006, it was announced that Middleton would receive her own 24-hour security detail supplied by the Royalty Protection branch (SO14). This fuelled further speculation that she and Prince William would soon be engaged, since she would not otherwise be entitled to this service. 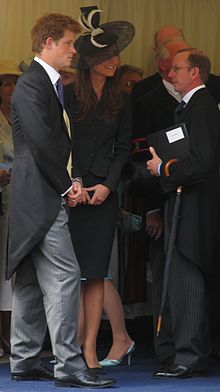 No engagement was forthcoming and Middleton was not granted an allowance to fund this security. Media attention increased around the time of her 25th birthday in January 2007, prompting warnings from both The Prince of Wales and Prince William and from Middleton's lawyers, who threatened legal action. Two newspaper groups, News International, which publishes The Times and The Sun, and the Guardian Media Group, publishers of The Guardian, decided to refrain from publishing paparazzi photographs of her.[38] Middleton attended at least one event as an official royal guest, Prince William's Passing Out Parade at the Royal Military Academy Sandhurst on 15 December 2006.[39] In December 2007, it was reported that she had moved in with Prince William at Clarence House, the residence of the Prince of Wales in London.[40] Clarence House later denied this.[41]

On 17 May 2008, Middleton attended the wedding of Prince William's cousin Peter Phillips to Autumn Kelly, which the prince did not attend.[42] On 19 July 2008, she was a guest at the wedding of Lady Rose Windsor and George Gilman. Prince William was away on military operations in the Caribbean, serving aboard the HMS Iron Duke.[43] In 2010, Middleton pursued an invasion of privacy claim against two agencies and photographer Niraj Tanna, who took pictures of her over Christmas 2009.[44] She obtained a public apology, £5,000 in damages, and legal costs.[45]

On 14 April 2007, The Sun newspaper broke a "world exclusive" suggesting that Prince William and Middleton had split up.[46] Other media outlets, such as the BBC, confirmed the story as the day progressed. The couple decided to break up during a holiday in the Swiss resort of Zermatt.[47][48] Clarence House made only one comment about the relationship's end, according to The Times, stating, "We don't comment on Prince William's private life".[49] Newspapers speculated about the reasons for the split, although these reports relied on anonymous sources.

The original report in The Sun quoted a "close friend of the couple" as saying that Middleton felt Prince William had not been paying her enough attention. The paper highlighted reports that Prince William had been spending time with other young women and said the Prince, aged 24 at the time of the split, felt he was too young to marry.[50] A report in the Daily Mail blamed a desire by royal courtiers not to "hurry along" a marriage announcement, and Prince William's desire to enjoy his bachelor status within his Army career. The Mail also suggested that a friend of Prince William encouraged the Prince to take a "careless approach" to relationships. The same article suggested that Middleton had "expected too much" in wanting Prince William to demonstrate his commitment to her.[51] 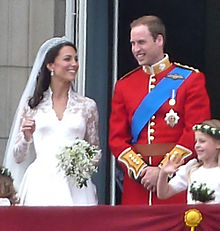 The newly married Duke and Duchess of Cambridge, on the balcony of Buckingham Palace

Prince William and Catherine Middleton became engaged in October 2010 in Kenya, East Africa, during a 10-day trip to the Lewa Wildlife Conservancy to celebrate Prince William passing his RAF helicopter search and rescue course.[57][58] Clarence House announced the engagement on 16 November 2010.[57][59] The couple married in Westminster Abbey on 29 April 2011,[60] (St. Catherine's Day) with the day declared a bank holiday in the United Kingdom. Estimates of the global audience for the wedding ranged around 300 million or more, whilst 26 million watched the event live in the United Kingdom.[61][62]

The Duke and Duchess meet with U.S. President Barack Obama and First Lady Michelle Obama at Buckingham Palace a few weeks after the wedding.[63]

Middleton was formally introduced to public life on 24 February 2011, two months before the wedding, when she and Prince William attended a lifeboat naming ceremony in Trearddur, Anglesey in North Wales.[64] A day later they appeared in St Andrews and launched the university's 600th anniversary celebrations. On 16 February 2011, Clarence House announced that the Duke and Duchess's first royal tour of Canada would take place in July 2011.[65]

She recently handed out medals to the members of the Irish Guards.[67] The Duchess visited the Canadian Museum of Civilization to attend a citizenship ceremony, on 1 July 2011 in Gatineau, Canada. The newly married Royal Couple were on the second day of their first joint overseas tour. They were joined by thousands of Canadians taking part in the Canada Day celebrations, which mark Canada’s 144th Birthday.[68]

On 2 November, The Duke and Duchess of Cambridge visited the UNICEF Supply Division Centre for supplying food to malnourished African children in Copenhagen, Denmark.[69][70]

Unlike the majority of royal brides, and in contrast to most previous consorts-in-waiting for over 350 years, Catherine does not come from a royal or aristocratic background.[74][75] On the morning of their wedding day on 29 April 2011, at 8:00 am, officials at Buckingham Palace announced that in accordance with royal tradition and on recognition of the day by the Queen, Prince William was created Duke of Cambridge, Earl of Strathearn and Baron Carrickfergus.[73][76]

In a study of the ancestry of Catherine, William Addams Reitwiesner uncovered that she shares ancestors with her husband Prince William; the closest relationship is via Prince William's mother and Catherine's father through a common descent from Sir Thomas Fairfax and his wife Agnes (or Anne) Gascoigne, daughter of Sir William Gascoigne and his wife, née Lady Margaret Percy.[81] This makes the couple fifteenth cousins.[82] Sir Thomas Fairfax and Agnes Gascoigne are through Catherine's great-grandmother Olive Lupton, daughter of a Leeds cloth merchant Francis Lupton and his wife Harriet (née Davis) – Fairfax being an ancestor of Lupton.[83] In turn Lady Margaret Percy[84] is descended from Edward III.

In his original publication of Middleton's ancestry, Reitwiesner uncovered circumstantial evidence, that has since been disproved, suggesting that Catherine and William were twelfth cousins once removed with common descent from Sir Thomas Leighton and Elizabeth Knollys, the latter a cousin once removed of Elizabeth I.[83]

Following international attention regarding the wedding, Lifetime aired a TV movie entitled William & Kate on 18 April 2011, in the US.[85] The film premiered in the UK on 24 April 2011.[86] Middleton [87] was played by Camilla Luddington[88] and Prince William by Nico Evers-Swindell.[89] TV programmes were also shown in the UK prior to the wedding which provided deeper insights into the couple's relationship and backgrounds, including When Kate Met William[90] and Channel 4's Meet the Middletons.[91]

A second TV Movie is also being produced that covers much the same ground as "William & Kate". That movie titled William & Catherine: A Royal Romance stars Alice St. Clair as Kate Middleton and Dan Amboyer as Prince William.[92] Of note in this second television movie is the appearance of Jane Alexander as the Queen and Alias alum Victor Garber as the Prince of Wales. According to The Hollywood Reporter the movie is scheduled to air 27 August 2011 in the United States on the Hallmark Channel.[93] The movie was filmed in Bucharest.[94]