Cover of a mail-order catalogue for scientific equipment.

Mail order is a term which describes the buying of goods or services by mail delivery. The buyer places an order for the desired products with the merchant through some remote method such as through a telephone call or web site. Then, the products are delivered to the customer. The products are typically delivered directly to an address supplied by the customer, such as a home address, but occasionally the orders are delivered to a nearby retail location for the customer to pick up. Some merchants also allow the goods to be shipped directly to a third party consumer, which is an effective way to send a gift to an out-of-town recipient.

A mail order catalogue is a publication containing a list of general merchandise from a company. Companies who publish and operate mail order catalogues are referred to as cataloguers within the industry. Cataloguers buy or manufacture goods then market those goods to prospects (prospective customers). Many cataloguers, just as with most retailers, are increasingly buying goods from China. Cataloguers "rent" names from list brokers or cooperative databases. The catalogue itself is published in a similar fashion as any magazine publication and distributed through a variety of means, usually via a postal service and the internet.

Sometimes supermarket products do mail order promotions, whereby people can send in the UPC plus shipping and handling to get a product made especially for the company.

Few things are not available through mail order.

The Outlook, American magazine advertisement from 1916 offering mail delivery of fish and seafood.

Creation of an industry

By creating a direct marketing industry through his mail order catalogue, Aaron Montgomery Ward would unknowingly enable the creation of a powerful global network that would include everything from mailing, to mail order, to telemarketing and lastly to social medias.[1] Together Ward and his long time competitor Sears changed the direction of the worldwide marketplace by introducing the concept of individuality with the term consumption, allowing therefore the generations of today to take full control of their consumption behaviours and all of this in complete privacy.[2] Today, the mail order catalogue industry Montgomery funded is worth approximately 100 billions of dollars,[2] and generates over 2 trillion only in incremental sales and supports till this day an estimated 10.9 million jobs either directly related to marketing industry or dependent upon it.[1]

According to The National Mail Order Association, Benjamin Franklin is believed to have been the first cataloguer in the United States.[citation needed] In 1744, he formulated the basic mail order concept when he produced the first catalogue, which sold scientific and academic books. He is also credited with offering the first mail order guarantee: "Those persons who live remote, by sending their orders and money to B. Franklin may depend on the same justice as if present".[citation needed]

The earliest surviving mail-order business, now known as Hammacher Schlemmer, was established by Alfred Hammacher in New York City in 1848. Offering mechanic's tools and builder's hardware, its first catalogue was published in 1881.[3] Now known for offering an eclectic assortment of items, it is America's longest running mail-order business.

This first catalogue was a single sheet of paper with a price list, 8 by 12 inches, showing the merchandise for sale and ordering instructions. Montgomery Ward identified a market of merchant-wary farmers in the Midwest. Within two decades, his single-page list of products grew into a 540-page illustrated book selling over 20,000 items. 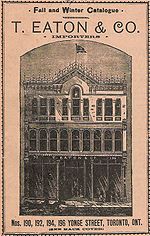 The T. Eaton Co. Limited was once Canada's largest department store retailer. It was founded in 1869 in Toronto by Timothy Eaton, an Irish immigrant. Eaton's grew to become a retail and social institution in Canada, with stores across the country, buying offices across the globe, and a catalogue that was found in the homes of most Canadians. The first Eaton's catalogue was a 34-page booklet issued in 1884. As Eaton’s grew, so did the catalogue. By 1920, Eaton's operated mail order warehouses in Winnipeg, Toronto and Moncton to serve its catalogue customers. Catalogue order offices were also established throughout the country, with the first opening in Oakville in 1916.

Over time, the catalogue became a less profitable operation, and by the 1970s, it was a money-losing proposition. As Canada's population became more urban over the course of the 20th century, Canadians had access to a greater number of local stores, and were less reliant on catalogue purchases. By the mid-1970s, it was estimated that 60 percent of the suburban customers throughout Canada lived within a thirty-minute drive of an Eaton’s store. Others blamed Eaton’s management for the catalogue’s failures, pointing to the similar Simpsons-Sears catalogue (now the Sears Canada catalogue), which continues to this day even though it has never enjoyed the iconic status or popularity of the Eaton's catalogue. At a news conference on January 14, 1976, Eaton's announced—to the shock of many Canadians—that the 1976 spring-summer catalogue would be their last and 9,000 mail-order employees were out of work. 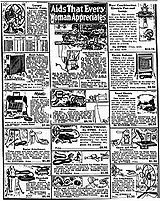 Richard Warren Sears was a railroad station agent in North Redwood, Minnesota when he started a business selling watches through mail order catalogs. Sears moved to Chicago, Illinois where he met Alvah C. Roebuck, who joined him in the business. In 1893, the corporate business name became Sears, Roebuck and Co.

The first Sears catalog was published in 1888. By 1894, the Sears catalog had grown to 322 pages, featuring sewing machines, bicycles, sporting goods, automobiles (produced from 1905–1915 by Lincoln Motor Car Works of Chicago, not related to the current Ford Motor Company brand of the same name)[5] and a host of other new items.

Organizing the company so it could handle orders on an economical and efficient basis, Chicago clothing manufacturer Julius Rosenwald became a part-owner in 1895. Alvah Roebuck had to resign soon after due to ill health, but the company still retained his name. By the following year, dolls, refrigerators, stoves and groceries had been added to the catalog.

Sears, Roebuck and Co. soon developed a reputation for both quality products and customer satisfaction. By 1895, the company was producing a 532-page catalog with the largest variety of items that anybody at the time could have thought of. “In 1893, the sales topped 400,000 dollars. Two years later they exceeded 750,000 dollars."

In 1906 Sears opened its catalog plant and the Sears Merchandise Building Tower.[6] And by that time, the Sears catalog had become known in the industry as "the Consumers' Bible". In 1933, Sears, Roebuck and Co. produced the first of its famous Christmas catalogs known as the "Sears Wishbook", a catalog featuring toys and gifts and separate from the annual Christmas Catalog.

Sir John Moores was a British businessman and philanthropist most famous for the founding of the Littlewoods retail company that was located in Liverpool, England. Moores became a millionaire through the creation of the Littlewood Pool, one of the best-known names in sports gambling in England.

In January 1932, Moores was able to disengage himself sufficiently from the pools to start up Littlewoods Mail Order Store. This was followed on July 6, 1937 by the opening of the first Littlewoods department store in Blackpool. By the time World War II started there were 25 Littlewoods stores across the UK and over 50 by 1952.

The first Littlewoods catalogue was published in May 1932 with 168 pages. The motto of the catalogue was: "We hoist our Flag in the Port of Supply, and right away we sail to the Ports of Demand—the Homes of the People. We intend to help the homely folk of this country help them to obtain some of the profits made by manufacturing and trading... to save money on things they must have. This Catalogue is our Ship... staffed by an All-British crew... You won't find sleepy, old-fashioned goods carried in the LITTLEWOODS ship. Only the newest of the new goods—honest, British-made merchandise."[8]

With the success of the catalogue business, Moores moved his business four times to larger buildings in 1932. Moores sailed to America to look at the operations of Montgomery Ward and Sears and Roebuck. By 1936, the business had hit the 4 million pound mark, making Moores a millionaire a second time over, by mail order.[8]

James Cash Penney started his first retail store in 1902 in Kemmerer, Wyoming. By 1925, J.C. Penney had 674 stores generating sales of $91 million. In 1962 J.C. Penney bought Wisconsin based General Merchandise Company with discount stores and a mail-order operation. Thus J.C. Penney entered the mail order catalogue business. J.C. Penney, a latecomer in catalogue operations, was different from many of its competitors because it had a large retail store base before launching into the mail-order business. The first JCPenney catalog was mailed the next year in 1963. Customers could order from the catalog inside J.C. Penney stores in eight states. The J.C. Penney Catalog Distribution Center was located in Milwaukee.[9]

Mail order pioneer Aaron Montgomery Ward knew that by using the technique of selling product directly to the consumer at appealing prices could, if executed effectively and efficiently, revolutionize the market industry and therefore be used as an innovative model for marketing products.[1] The term "direct marketing" was coined long after Montgomery Ward`s time. In 1967 Lester Wunderman identified, named, and defined "direct marketing". Wunderman — considered to be the father of contemporary direct marketing — is behind the creation of the toll-free 1-800 number[1] and numerous mail order based loyalty marketing programs including the Columbia Record Club, the magazine subscription card, and the American Express Customer Rewards program.[10]

With the invention of the Internet, a company's website became the more usual way to order merchandise for delivery by mail, although the term "mail order" is not always used to describe the ordering of goods over the Internet. It is more usual to refer to this as e-commerce or online shopping. Most traditional mail order companies now also sell over the Internet.

The objective of the direct marketing industry is to alter the sales distribution chain, in other words [bypass] the wholesaler and the retailer and go directly to the customer, reducing therefore tariffs and taxes.[21]

In the United States, an advantage of this type of shopping is that the merchant is typically not required by law to add sales tax to the price of the goods, unless they have a physical presence in the customer's state. Instead, most states require the resident purchaser to pay applicable taxes. There has been periodic discussion about amending the law to make these sales taxable.

In the European Union, a "VAT union" is in force: the merchant selling to a buyer in a different EU member country adds the VAT of his own country to the price, and the buyer pays no additional tax. A buyer for resale may deduct that VAT, just as with purchases made within his own country. This makes the EU look more like one country than the U.S. in this respect.