Electronic commerce, commonly known as e-commerce, eCommerce or e-comm, refers to the buying and selling of products or services over electronic systems such as the Internet and other computer networks. However, the term may refer to more than just buying and selling products online. It also includes the entire online process of developing, marketing, selling, delivering, servicing and paying for products and services. The amount of trade conducted electronically has grown extraordinarily with widespread Internet usage. The use of commerce is conducted in this way, spurring and drawing on innovations in electronic funds transfer, supply chain management, Internet marketing, online transaction processing, electronic data interchange (EDI), inventory management systems, and automated data collection systems. Modern electronic commerce typically uses the World Wide Web at least at one point in the transaction's life-cycle, although it may encompass a wider range of technologies such as e-mail, mobile devices and telephones as well.

Electronic commerce that takes place between businesses is referred to as business-to-business or B2B. B2B can be open to all interested parties (e.g. commodity exchange) or limited to specific, pre-qualified participants (private electronic market). Electronic commerce that takes place between businesses and consumers, on the other hand, is referred to as business-to-consumer or B2C. This is the type of electronic commerce conducted by companies such as Amazon.com. Online shopping is a form of electronic commerce where the buyer is directly online to the seller's computer usually via the internet. There is no intermediary service involved. The sale or purchase transaction is completed electronically and interactively in real-time such as in Amazon.com for new books. However in some cases, an intermediary may be present in a sale or purchase transaction such as the transactions on eBay.com.

Electronic commerce is generally considered to be the sales aspect of e-business. It also consists of the exchange of data to facilitate the financing and payment aspects of business transactions.

Originally, electronic commerce was identified as the facilitation of commercial transactions electronically, using technology such as Electronic Data Interchange (EDI) and Electronic Funds Transfer (EFT). These were both introduced in the late 1970s, allowing businesses to send commercial documents like purchase orders or invoices electronically. The growth and acceptance of credit cards, automated teller machines (ATM) and telephone banking in the 1980s were also forms of electronic commerce. Another form of e-commerce was the airline reservation system typified by Sabre in the USA and Travicom in the UK.

In 1990, Tim Berners-Lee invented the WorldWideWeb web browser and transformed an academic telecommunication network into a worldwide everyman everyday communication system called internet/www. Commercial enterprise on the Internet was strictly prohibited by NSF until 1995.[1] Although the Internet became popular worldwide around 1994 with the adoption of Mosaic web browser, it took about five years to introduce security protocols and DSL allowing continual connection to the Internet. By the end of 2000, many European and American business companies offered their services through the World Wide Web. Since then people began to associate a word "ecommerce" with the ability of purchasing various goods through the Internet using secure protocols and electronic payment services. 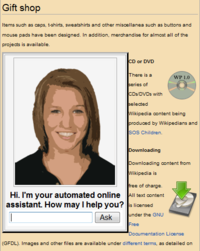 An example of an automated online assistant on a merchandising website.

Some common applications related to electronic commerce are the following:

In the United States, some electronic commerce activities are regulated by the Federal Trade Commission (FTC). These activities include the use of commercial e-mails, online advertising and consumer privacy. The CAN-SPAM Act of 2003 establishes national standards for direct marketing over e-mail. The Federal Trade Commission Act regulates all forms of advertising, including online advertising, and states that advertising must be truthful and non-deceptive.[12] Using its authority under Section 5 of the FTC Act, which prohibits unfair or deceptive practices, the FTC has brought a number of cases to enforce the promises in corporate privacy statements, including promises about the security of consumers’ personal information.[13] As result, any corporate privacy policy related to e-commerce activity may be subject to enforcement by the FTC.

The Ryan Haight Online Pharmacy Consumer Protection Act of 2008, which came into law in 2008, amends the Controlled Substances Act to address online pharmacies.[14]

On the institutional level, big corporations and financial institutions use the internet to exchange financial data to facilitate domestic and international business. Data integrity and security are very hot and pressing issues for electronic commerce.

Business models across the world also continue to change drastically with the advent of eCommerce and this change is not just restricted to USA. Other countries are also contributing to the growth of eCommerce. For example, the United Kingdom has the biggest e-commerce market in the world when measured by the amount spent per capita, even higher than the USA. The internet economy in UK is likely to grow by 10% between 2010 to 2015. This has led to changing dynamics for the advertising industry[15]

Amongst emerging economies, China's eCommerce presence continues to expand. With 384 million internet users,China's online shopping sales rose to $36.6 billion in 2009 and one of the reasons behind the huge growth has been the improved trust level for shoppers. The Chinese retailers have been able to help consumers feel more comfortable shopping online.[16] E-Commerce has become an important tool for businesses worldwide not only to sell to customers but also to engage them.[17]

Impact on markets and retailers

Economists have theorized that e-commerce ought to lead to intensified price competition, as it increases consumers' ability to gather information about products and prices. Research by four economists at the University of Chicago has found that the growth of online shopping has also affected industry structure in two areas that have seen significant growth in e-commerce, bookshops and travel agencies. Generally, larger firms have grown at the expense of smaller ones, as they are able to use economies of scale and offer lower prices. The lone exception to this pattern has been the very smallest category of bookseller, shops with between one and four employees, which appear to have withstood the trend.[18]

E-Commerce and E-Business at Wikibooks