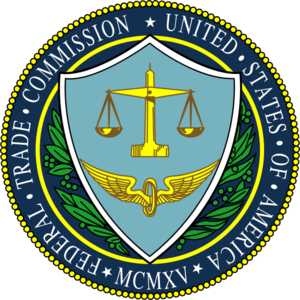 The Federal Trade Commission (FTC) is an independent agency of the United States government, established in 1914 by the . Its principal mission is the promotion of "" and the elimination and prevention of what regulators perceive to be "anti-competitive" business practices.

The was one of President Wilson's major acts against trusts. Trusts and were significant political concerns during the . Since its inception, the FTC has enforced the provisions of the , a key statute, as well as the provisions of the FTC Act, UnitedStatesCode|15|41 et seq. Over time, the FTC has been delegated the enforcement of additional business regulation statutes and has promulgated a number of regulations (codified in Title 16 of the ).

Organization of the Federal Trade Commission

The Bureau of Consumer Protection’s mandate is to protect consumers against "unfair" or deceptive acts or practices in commerce. With the written consent of the Commission, Bureau attorneys enforce federal laws related to consumer affairs as well as rules promulgated by the FTC. Its functions include investigations, enforcement actions, and consumer and business education. Areas of principal concern for this bureau are: advertising and marketing, financial products and practices, telemarketing fraud, privacy and identity protection etc. The bureau also is responsible for the .

Under the FTC Act, the Commission has the authority, in most cases, to bring its actions in federal court through its own attorneys. In some consumer protection matters, the FTC appears with, or supports, the .

The Bureau of Competition is the division of the FTC charged with elimination and prevention of "anticompetitive" business practices. It accomplishes this through the enforcement of laws, review of proposed s, and investigation into other non-merger business practices that may impair competition. Such non-merger practices include horizontal restraints, involving agreements between direct competitors, and , involving agreements among businesses at different levels in the same industry (such as suppliers and commercial buyers).

The Bureau of Economics was established to support the Bureau of Competition and Consumer Protection by providing expert knowledge related to the economic impacts of the FTC's legislation and operation.

Activities of the FTC

The FTC carries out (parties) its mission by investigating issues raised by reports from consumers and businesses, pre-merger notification filings, congressional inquiries, or reports in the media. These issues include, for instance, and other forms of . FTC investigations may pertain to a single company or an entire industry. If the results of the investigation reveal unlawful conduct, the FTC may seek voluntary compliance by the offending business through a consent order, file an administrative complaint, or initiate federal litigation. Under the FTC Act, the federal courts retain their traditional authority to issue , including the appointment of receivers, monitors, the imposition of asset freezes to guard against the spoliation of funds, immediate access to business premises to preserve evidence, and other relief including financial disclosures and expedited discovery. In numerous cases, the FTC employs this authority to combat serious consumer deception or fraud. Additionally, the FTC has power to address concerns regarding industry-wide practices. Rules promulgated under this authority are known as "Trade Rules".

In the mid-1990s, the FTC launched the fraud sweeps concept where the agency and its federal, state, and local partners filed simultaneous legal actions against multiple telemarketing fraud targets. The first sweeps operation was "Project Telesweep" [ [http://www.ftc.gov/bcp/franchise/tsweep01.htm Business Opportunity Scam "Epidemic" ] ] in July 1995 which cracked down on 100 business opportunity scams.

One of the Federal Trade Commission other large focuses is . The FTC serves as a federal repository for individual consumer complaints regarding identity theft. Even though the FTC does not resolve individual complaints, it does use the aggregated information to determine where federal action might be taken. The complaint form is available online or by phone (1-877-ID-THEFT).

On May 23, 2007, the House passed the Energy Price Gouging Prevention Act, H.R. 1252, which will provide immediate relief to consumers by giving the Federal Trade Commission the authority to investigate and punish those who artificially inflate the price of energy. It will ensure the federal government has the tools it needs to adequately respond to energy emergencies and prohibit price gouging – with a priority on refineries and big oil companies [http://speaker.gov/issues?id=0031#bigoil] .