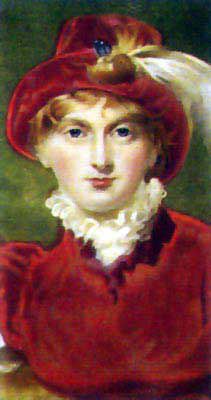 Caroline was born on May 17, 1768 at (Historic English name: "Brunswick") in , daughter of Karl William, Duke of Brunswick-Wolfenbüttel and , eldest sister of George III.

She married the British king's eldest son, her , on April 8, 1795 at in . Her new husband, the future George IV then , regarded Caroline as unattractive and unhygienic; he also suspected that she was not a virgin when they married. He himself had already secretly married ; however, his marriage to Fitzherbert violated the Royal Marriage Act of 1772 and thus was not legally valid.

For Caroline's part, she found her husband equally unattractive, and the prince's correspondence reveals that the couple only had sexual intercourse three times during their marriage: twice during the first night, and once the second night. Princess Charlotte Augusta, George's only legitimate child, was born from one of these unions on January 7, 1796. The Prince and Princess of Wales never lived together afterwards, and appeared separately in public, both becoming involved in affairs with other lovers. This earned her the nickname 'The Immoral Queen.'

It was alleged that her marriage was made uncomfortable by George IV's affair with royal . However, it is more likely that Caroline had little interest in her husband, and thus little interest in whom he might be involved with romantically.

Caroline was prevented from seeing her daughter on a day-to-day basis, and was eventually banished in 1799 to a private residence The Vicarage in Charlton then , the home of the , "the pagoda" may have been used as a garden house in Blackheath, where she allegedly had affairs with the politician and the admiral Sir Sidney Smith.

In 1806, it was rumoured that a child living with her was her son, in which case he would have a right of succession, if his father were the Prince of Wales. A secret investigation was set up, the "Delicate Investigation", but did not prove the allegation, although it showed that her conduct was improper. In 1814, the Princess left the country and went to live abroad, running up large debts throughout Europe and taking other lovers. During this period, the couple's daughter, who had married Prince Leopold of Saxe-Coburg-Saalfeld, died after giving birth to her only child, a stillborn son. She was notified of the tragedy by a private letter from her grieving son-in-law.Her estranged husband's accession to the Throne in 1820 brought Caroline back to Britain. She had declined monetary offers to stay away. When she arrived in England on June 6, riots broke out in support of her. The King asked his ministers to get rid of her. The was introduced in Parliament in order to strip Caroline of the title of queen consort and dissolve her marriage. It was claimed that Caroline had been involved with a low-born man, Bartolomeo Pergami, on the continent. The bill passed the , but was not submitted to the House of Commons as there was little prospect that the Commons would pass it. Caroline indicated that she had indeed committed adultery with one man - the husband of Mrs. Fitzherbert (referring to the King). Caroline was turned away from the coronation on July 21, 1821 at the doors of Westminster Abbey. Despite the King's best attempts, Caroline retained a very strong popularity amongst the masses, and therefore wielded considerable power in spite of his disliking her.

On the night of the coronation, Caroline fell ill, vomiting, with an erratic pulse. She died three weeks later. Even up till her last moments, she was being reported on by a man named Stephen Lushington, who conveyed his insights to the King’s loyal supporter, the Prime Minister, . Exactly why this deathbed surveillance was carried out remains unclear, and the surviving documentation is patchy in the extreme. The exact cause of her death has never been ascertained, but Caroline was certain that she had been poisoned. Her physicians thought it to be an intestinal obstruction. Caroline, knowing she would die, forbade an autopsy. She died at age 53 on August 7, 1821. She legally remained queen consort of the United Kingdom, but she was buried in her native Brunswick. Her tomb bears the inscription "Here lies Caroline, the Injured Queen of England".

*Caroline is mentioned in the third series of the BBC comedy "", which focused on the time of her future husband's life while he was . Blackadder, the Prince's butler, is searching for a possible wife for the prince, and mentions Caroline of Brunswick as the only one suitable to marry him, but then dismisses her because she "has the worst personality in Germany."
*The story of Caroline's marriage to George and her battle to be recognized as Queen Consort served as the basis for the 1996 "". played Caroline of Brunswick and played George IV.
*"The Secret Wife of King George IV" by Diane Haeger

At her death, Caroline's official title was "Her Majesty Caroline", "Queen of the United Kingdom of Great Britain and Ireland, Queen of Hanover, Duchess of Brunswick and Luneburg"