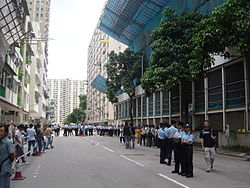 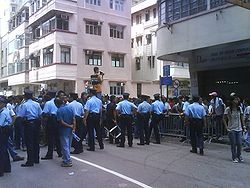 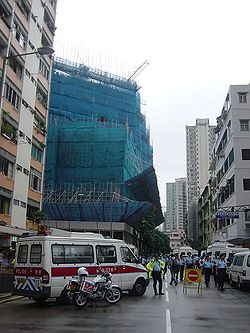 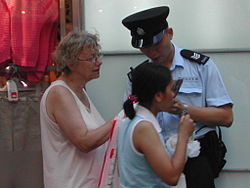 A sergeant giving directions to a woman 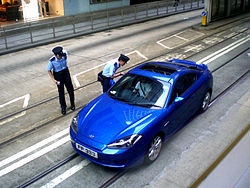 Officers stop and check a vehicle, and admonish the driver

The current Commissioner of Police is Andy Tsang Wai-hung.[2] Including the Hong Kong Auxiliary Police Force and civil servants, the force consists of about 40,000 personnel; which gives Hong Kong the second largest citizen–police officer ratio in the world.[3] In addition, the Marine Region with about 3,000 officers and a fleet of 143 vessels, is the largest of any civil police force.[4][5][6]

The Hong Kong Police has been serving Hong Kong since shortly after the island was established as a colony in 1841. On 30 April 1841, 12 weeks after the British landed in Hong Kong, Captain Charles Elliot established a police force in the new colony. The first chief of police was Captain William Caine, who also served as the Chief Magistrate.[7]

The 1950s saw the commencement of Hong Kong's 40 year rise to global eminence, during which time the Hong Kong Police tackled many issues that have challenged Hong Kong's stability. Between 1949 and 1989, Hong Kong experienced several huge waves of immigration from mainland China, most notably 1958–62. In the 1970s and '80s, large numbers of Vietnamese boat people arrived in Hong Kong, posing challenges first for marine police, secondly for officers who manned the dozens of camps in the territory and lastly for those who had to repatriate them. The force was granted the Royal Charter in 1969 for their handling of the Hong Kong 1967 riots — renaming them: the Royal Hong Kong Police Force.

The recruitment of Europeans to the force ceased in 1994, and in 1995 the Hong Kong Police became responsible for patrolling the border with China. Prior to 1995, the British Army was responsible for border patrol. 1997 saw Britain's return of the sovereignty of Hong Kong to mainland China. The Force played a prominent role in the handover celebrations and continues to perform flag raising ceremonial duties to this day.

The current crest of the force was adopted in 1997 to replace the previous crest which contained symbols of British sovereignty. Changes to the crest included:

For day-to-day policing (Operations), the Force is organised into six regions:

The Force Headquarters (Management) is made up of 5 departments:

Regions are largely autonomous in their day-to-day operation and management matters, and each has its own headquarters, which comprises administration and operation wings, Emergency Units, as well as traffic and criminal investigation units. Each region is divided into districts and divisions and, in a few cases, sub-divisions. Currently there are 23 districts. The policing of Hong Kong Island, Kowloon and the main towns of the New Territories follow a similar pattern. Responsibility for law and order on the Mass Transit Railway, which runs through most police districts, is vested in the Railway District.

Police Force operational matters are coordinated by the Operations & Support Department. Land Operations and Support are divided into six regions, whereas marine matters are managed by the marine police — organised as one Marine Region. Each land region comprises two wings, the operations wing and support wing, and a traffic headquarters (which is part of the operations wing). The department is charged with the formulation and implementation of policies, the monitoring of activities and the efficient deployment of personnel and resources. Operations Wing coordinates counter terrorism, internal security, anti illegal-immigration measures, bomb disposal commitments and contingency planning for natural disasters — they are also responsible for the Police Dog Unit.

There are Support Wings in each of the land regions. A Support Wing oversees the execution and staffing of operational support matters, including the formulation of operational policies for both the regular and Hong Kong Auxiliary Police Force and for updating kits and equipment. It is also responsible for the various licensing functions of the Force. The coordination of all public relations activities is arranged through the Police Public Relations Branch. There are three branches in a support wing: 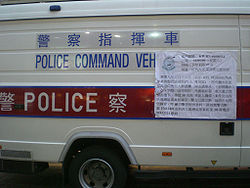 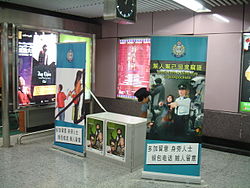 Crime & Security Department is responsible for the force policy regarding the investigation of crimes and matters of a security nature. Crime Wing consists of a number of operational bureau and specialised units. The operational bureau deal with specific areas of criminal activity whereas the specialised units provide support services to operational units in the force and deal with policy matters on various issues including child abuse, domestic violence and witness protection. Security Wing provides VIP protection and security co-ordination, including counter-terrorism.

Is responsible for a range of security-related matters including VIP protection, counter-terrorism and security co-ordination.

Information Technology Branch is responsible for the planning, development, implementation, operation and maintenance of information technology systems. It has over 10,000 terminals installed throughout Hong Kong supporting the Force in the spheres of command and control, criminal records, crime intelligence analysis, fingerprint identification, reports to Police, human and financial resources planning and management, transport management, licencing, and e-mail.

Business Services Bureau coordinates the business needs of the five departments of the Force. It consists of the Business Services Division, the e-Police Division and the Major Systems Division which acts as the System "Owner" for systems used Force-wide.

Service Quality Wing is responsible for spearheading initiatives to improve services provided to force customers both external and internal. The wing comprises three branches: Performance Review, Research and Inspections and Complaints and Internal Investigations (C&II). The Wing is responsible for implementing the force strategy on 'service quality' which aims at promoting efficiency, effectiveness and economy, whilst pursuing continuous improvement. The C&II Branch which includes the Complaints Against Police Office (CAPO) oversees the investigation and successful resolution of all complaints made both externally and internally against members of the force. The work of CAPO is closely monitored by the Independent Police Complaints Council to ensure that all complaints against police officers and traffic wardens are fully and impartially investigated. The findings of CAPO are seldom challenged by the IPCC.

Finance Wing is responsible for the financial management, stores and internal audit of the Force. Administration Wing is responsible for civilian staff, force establishment matters and the management of the Police Museum. Planning and Development Branch (P&D) coordinates strategic thinking and planning on options for the operational policing of Hong Kong into the foreseeable future. It is responsible for maintaining and modernising the police estate and for running projects for the construction of new police buildings/facilities.

The HKPF continues to use similar ranks and insignia to those used in British police forces. Until 1997, the St Edward's Crown was used in the insignia, when it was replaced with the Bauhinia flower crest of the Hong Kong government. The crest of the force was modified in 1997. The rank structure, organisation and insignia are similar to that used by the Metropolitan Police Service until the mid-1970s.[8] 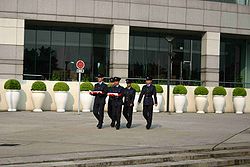 (e.g. EU, PTU and CTRU): Wear uniform identical to Uniform Branch officers, although berets are worn rather than caps and trousers are tucked into boots. Riot helmets are worn for riot control. 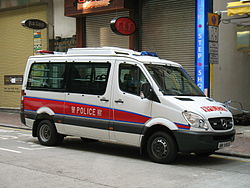 One of the most commonly seen police vehicles in Hong Kong, a Mercedes-Benz Sprinter van. 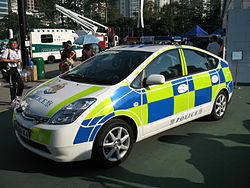 Most police vehicles in Hong Kong are white, with a blue and red 3M retroreflective stripe around on the sides of the vehicle with wording "警 Police 察" in white, the only exception being the armoured personnel carriers specially designed for the Police Tactical Unit, which are wholly dark blue and with wording "警 Police 察" on a light blue background in white on the sides of the vehicle. Most police vehicles in Hong Kong are equipped with both red and blue emergency vehicle lighting. The vehicles which are allocated to the Hong Kong International Airport have an additional yellow emergency vehicle lighting. It should be noted that all police vehicle are government property and therefore have a license plate which starts with "AM".

Since 2008, the Hong Kong Police Force have brought in the use of battenburg markings for new police vehicles of the Traffic Branch Headquarters. In addition, these new vehicles show the Force crest on the front part of the vehicle, which the Force has not used in the design of new vehicles for the last two decades.

The Hong Kong Police Force have unmarked police vehicles in order to catch and arrest criminals in the act; such vehicles include the discrete and high performance BMW 5 Series car, among other types. Also, the Force operate unmarked police vehicles for surveillance to gather evidence of any criminal offence. In addition, for security purposes, armoured cars specially designed for the Very Important Person Protection Unit and bulletproof tactical police vehicles specially designed for the Special Duties Unit have no markings also.