The Hong Kong Monetary Authority (Chinese: 香港金融管理局) or HKMA (金管局) is Hong Kong's central banking institution (more precisely, currency board). It is a government authority founded on 1 April 1993 via the consolidation of "Office of the Exchange Fund" and the "Office of the Commissioner of Banking". The organisation reports directly to the Financial Secretary.[1]

The fund was established and managed originally by the "Currency Ordinance" in 1935. It is now named the "Exchange Fund Ordinance".

Under the Exchange Fund Ordinance, the HKMA's primary objective is to ensure the stability of the Hong Kong currency, and the banking system. It is also responsible for promoting the efficiency, integrity and development of the financial system.[2]

The HKMA issues banknotes only in the denomination of ten Hong Kong dollars. The role of issuing other banknotes is delegated to the note-issuing banks in the territory, namely the Hong Kong and Shanghai Banking Corporation, Standard Chartered Bank and the Bank of China.

The official reserves of Hong Kong and the banking system are important underpinnings of the Linked Exchange Rate System.

Since 1995, the HKMA has entered into a stability pact with central banks in Malaysia, Thailand, Indonesia and Australia to engage in repurchase agreements, which provide liquidity on a two-way basis.[3]

The Central Money Markets Unit (CMU), established in the 1990, provide computerised clearing and settlement facilities for Exchange Fund Bills and Notes. It extended the service to other Hong Kong dollar debt securities in late 1993. A seamless interface allow the co-existence of the CMU and the newly launched Real Time Gross Settlement (RTGS) inter-bank payment system. This enables end-of-day "Delivery Versus Payment" services as opposed to Non-DVP.

It is included the Linked Exchange Rate System and noticeable features such as the Aggregate Balance, Certificates of Indebtedness and coins issued and the Outstanding Exchange Fund Bills and Notes.

The Interest Rate Adjustment Mechanism is an automatic system that maintains the stability of the Hong Kong dollar exchange rate. Lately the HKMA has been disclosing the forecast change in the

In 1995, Nobel Prize winning economist Milton Friedman mistakenly predicted the Hong Kong dollar's demise within two years of the 1997 handover. He also predicted the absorption of the territory's financial reserves of US$43 billion (HK$335.4 billion) by Beijing, which would not be able to bear the subrogation of Hong Kong's monetary policy to the United States.[4]

As with any monetary system not based on a fiat money (which includes currency boards, currency unions and the traditional Gold Standard) it is impossible to use monetary policy in order to stabilise the business cycle: this means that any macroeconomic adjustment has to be achieved by changes in the prices of assets and labour. In Hong Kong, this is made easier by two factors: the first is the openness of the economy, with an aggregate demand heavily dependent on international trading partners; this reduces the risk of classic liquidity traps. The second factor is the scarce political clout of the trade unions, which makes it easier to trim the nominal salaries during recessionary times.[5] Moreover, the high saving rates and the moral stigma attached to bankruptcy have kept relatively low the level of defaults on mortgages even during the deep recessions after the Asian crisis after 1998 and the SARS epidemic in 2002/2003.

The fund was established and managed originally by the "Currency Ordinance" in 1935. It is now named the "Exchange Fund Ordinance".

Under colonial rule, the HKMA did not place funds with local banks not rated by Moody's Investors Service or Standard & Poor's. Only the three note issuing banks could receive deposits because they had been rated by "objective international standards".[6]

During the Asian financial crisis, currency speculators sold the Hong Kong dollar heavily and shorted local stocks and Hang Seng Index futures. The government controversially used the exchange fund to acquire HK$120 billion (US$15 billion) worth of blue-chip shares in a two-week market intervention, beginning 12 August 1998 with the aim of punishing and deterring currency speculators.[7] The intervention was widely criticised as being detrimental to the reputation as one of the world's financial centres. Instead of being a regulator, the government has become "a player, a very key player."[8]

In hindsight, one speculator said : "Government intervention raised public confidence in the market when it was near total collapse. It prevented a bigger crisis and saved the market.[9]

Most stocks acquired during that operation were successively disposed with the creation of a tracker fund, the TraHK. That reduced the portfolio of HK equities to 5.3% of the reserves in 2003. However, the percentage crept back and had risen above 10% by the year 2006.

In August 1998, as part of its wider remit to protect the currency, the Authority lent the Thai Government US$1 billion from the fund as part of a 17 billion bailout organised by the International Monetary Fund (IMF).[2]

Banking Stability mainly depends on the "Banking System and Supervision". A "Three-Tier System" was implemented in the 1980s. Institutions are also managed differently depending on whether they are categorised as Licensed Banks, Restricted License Bank or Deposit-taking Institutions. Overseas banks may also establish local representative offices in Hong Kong. 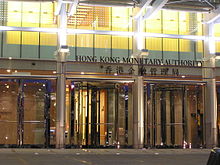 The HKMA's is headquartered in the International Finance Centre. It purchased 14 floors in tower 2.[10] The 55th, 56th and the 77th to 88th floors were bought for US$ 480 million in 2001.[11] An exhibition area, currently containing an exhibit of Hong Kong's monetary history, and a library of the Hong Kong Monetary Authority Information Centre occupy the 55th floor.[12] The 88th floor of the tower contains the office of the Chief Executive of the HK Monetary Authority, and is served by an individual lift.

The Hong Kong Monetary Authority hosted the meeting of the World Bank and IMF in 1997, at an estimated cost of HK$485 million. Yam hoped that hosting the event would cement Hong Kong's status as an international financial centre. He added: "The presence of the world's leading finance ministers, central bank governors and top commercial bankers in Hong Kong so soon after the change of sovereignty will help boost international and local confidence in Hong Kong.[14]