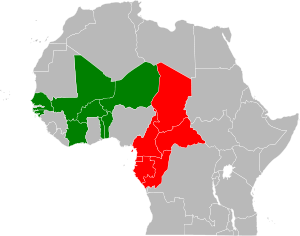 BEAC is the central bank of the states in red.

Philibert Andzembe of Gabon was Governor of the BEAC from July 2007 until October 2009, when he was fired by the new president of Gabon, Ali Bongo, in response to a bank scandal in which $28.3 million went missing from the bank's Paris branch. Jean Félix Mamalepot, also from Gabon, was Governor for preceding 17 years.[2]

In December 2010, a Wikileaks memo dated July 7, 2009, said that Gabonese officials working for the Bank of Central African States stole US$36 million over a period of five years from the pooled reserves, giving much of the money to members of France’s two main political parties.[3]