Landlocked Chad's economic development suffers from its geographic remoteness, drought, lack of infrastructure, and political turmoil. About 85% of the population depends on agriculture, including the herding of livestock. Of Africa's Francophone countries, Chad benefited least from the 50% devaluation of their currencies in January 1994. Financial aid from the World Bank, the African Development Bank, and other sources is directed largely at the improvement of agriculture, especially livestock production. Because of lack of financing, the development of oil fields near Doba, originally due to finish in 2000, was delayed until 2003. It was finally developed and is now operated by Exxon Mobil Corporation.[2]

Economic statistics for Chad must be treated with caution. Significant trade with neighbouring countries, for example, exports of camels and other livestock to neighbouring states, such as Libya, and imports of manufactured goods, are conducted "informally" and probably not fully recorded.

This is a chart of trend of gross domestic product of Chad at market prices estimated by the International Monetary Fund with figures in millions of CFA Francs.

Current GDP per capita of Chad grew 23% in the Sixties reaching a peak growth of 80% in the Seventies. But this proved unsustainable and growth consequently scaled back to 30% in the Eighties. Finally, it shrank by 40% in the Nineties.

In 2000, Chad's nominal GDP was estimated at just over $1.43 billion with per capita income at approximately $188. Oil production started in 2003; by 2008, oil accounted for 47 percent of GDP and oil revenues had risen to 41 percent of GDP. Economic growth has been subdued in 2007 and 2008, with a ¼ percent growth in real GDP in 2007 due to weak non-oil growth, marked by weak agricultural production, and a sharp decline in oil production owing to technical problems in several fields. Real GDP in 2008 is expected to decline by ½ percent because of a further drop in oil production and the impact of the 2008 February rebel attack on economic activity over the first half of the year. Positive growth rates are not expected until 2010.[3] Cotton, cattle and gum arabic are Chad’s major exports. More than 80% of the work force is involved in agriculture (subsistence farming, herding, and fishing). Like many other developing countries, Chad has a small formal sector and a large, thriving informal sector. Government statistics indicate the following distribution: Agriculture—38% (farming—23%, livestock—12%, fishing—3%); industry—13%; and services—45%. Chad is highly dependent on foreign assistance. Its principal donors include the European Union, France, and the multilateral lending agencies.

Primary markets for Chadian exports include neighboring Cameroon and Nigeria and France, Germany, and Portugal. Until crude oil production began in 2003, cotton played the dominant role, accounting for 40% of total exports in 1999 and remains important. Rehabilitation of Cotontchad, the major cotton company that suffered from a decline in world cotton prices, has been financed by France, the Netherlands, the European Economic Community (EC), and the International Bank for Reconstruction and Development (IBRD). As of January 2002, the parastatal was undergoing privatization.

The other major export is livestock, herded to neighboring countries. Herdsmen in the Sudanic and Sahelian zones raise cattle, sheep, goats, and, among the non-Muslims, a few pigs. In the Saharan region, only camels and a few hardy goats can survive. Chad also sells smoked and dried fish to its neighbors and exports several million dollars worth of gum arabic to Europe and the U.S. each year. Other food crops include pearl millet, sorghum, peanuts, rice, sweet potatoes, manioc, cassava, and yams. 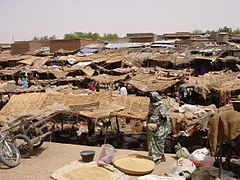 Chad’s economic performance continues to depend on fluctuations in rainfall and in prices of its principal export commodities, especially cotton. Between 1996 and 1998, the Chadian economy averaged 4.7% growth from. However, unfavorable weather conditions contributed to disappointing harvests in 1999-2000, and GDP grew only by 1% and 0.6% respectively. Inflation was estimated 3.7% in 2000 after prices fell by 8% in 1999.

The effects on foreign investment of years of civil war are still felt today, as investors who left Chad between 1979-82 have only recently begun to regain confidence in the country's future. By early 1983, the return of internal security and a successful Geneva donors' conference had prompted a number of international business representatives to make exploratory visits to Chad. By far the most important venture to date is the oil extraction project in southern Chad.

As of 2004 the economy of Chad has been subjected to further pressure due to fleeing refugees from the conflict in the neighbouring Darfur region of Sudan.

Beginning in late 2000, the Doba Basin oil project has stimulated major investments into Chad and it is expected to double government tax revenues by 2004. It is hoped that this project will serve as a catalyst for the entire economy by helping to reduce energy costs and attract additional trade and investment in other sectors. The question remains whether Chad will continue to consolidate its economic reforms and invest its oil revenues wisely in order to encourage a wider range of economic initiatives. Recent political controversy surrounding the contested 2001 presidential election and a continuing rebellion in northern Chad have continued to dampen Chad's economic prospects by exposing the weaknesses in Chad's political institutions.

The International Monetary Fund has projected high growth rates during the next 3 years, as the Doba basin oil project in southern Chad accelerates. The Exxon Mobil-led project will pump oil from reserves in Chad through an underground pipeline to coastal Cameroon, where it will be loaded onto tankers. Following a crucial World Bank financing decision in June 2000, the Doba project officially began its construction phase in October 2000. Between 2000 and 2003, an American-led consortium invested $3.7 billion into the project, approximately $2 billion of which was invested in Chad. By the year 2003-04 the consortium planned to produce between 150,000 to 250,000 barrels of oil a day from three fields in southern Chad. The project is expected to provide between $80 and $100 million in annual government revenues during the 25-year production phase. However, despite this economic growth, some environmentalists and African NGOs fear that the project will lead to grave environmental damage and the dominance of the Chadian economy by foreign powers.

In 2007, cotton and hydrocarbon industries accounted for well over 95% of the Chadian economy. Diversification of the economy into manufacturing industries remain a long-term issue.